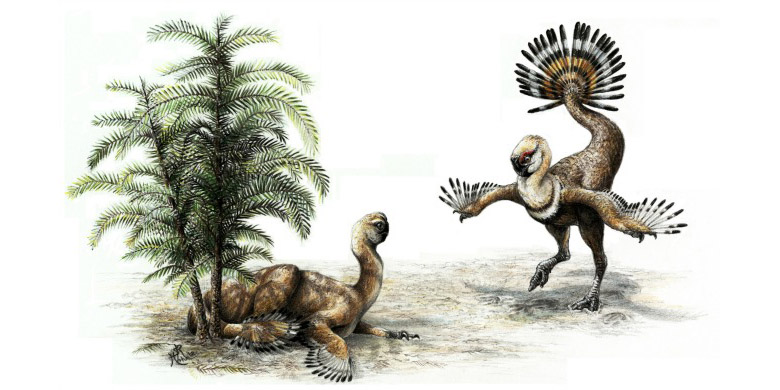 (Edmonton) A University of Alberta researcher’s examination of fossilized dinosaur tail bones has led to a breakthrough finding: some feathered dinosaurs used tail plumage to attract mates, much like modern-day peacocks and turkeys.

U of A paleontology researcher Scott Persons followed a chain of fossil evidence that started with a peculiar fusing together of vertebrae at the tip of the tail of four different species of dinosaurs, some separated in time and evolution by 45 million years.

Persons says the final vertebrae in the tails of a group of dinosaurs called oviraptors were fused together, forming a ridged, blade-like structure. “The structure is called a pygostyle” says Persons. “Among modern animals, only birds have them.”

Researchers say fossils of Similicaudipteryx, an early oviraptor, reveal feathers radiating from the fused bones at the tail tip. Similicaudipteryx was not known to be a flying dinosaur, and Persons contends its tail feathers evolved as a means of waving its feathered tail fans.

No direct fossil evidence of feathers has been found with the fossils of the oviraptors that followed Similicaudipteryx, but Persons says there is still strong evidence they had a feathered tail.

He says the hypothesis of oviraptor tail-waving is supported by both the bone and muscle structure of the tail.

Individual vertebrae at the base of an oviraptor’s tail were short and numerous, indicating great flexibility. Based on dissections of modern reptile and bird tails, Persons’ reconstruction of the dinosaur’s tail muscles revealed oviraptors had what it took to really shake their tail feathers.

Large muscles extended far down the tail and had a sufficient number of broad connection points to the vertebrae to propel oviraptors’ tail feathers vigorously from side to side and up and down.

Oviraptors were two-legged dinosaurs that had already gone through major diversifications from the iconic, meat-eating dinosaur family. Oviraptors were plant-eaters that roamed parts of China, Mongolia and Alberta during the Cretaceous period, the final age of the dinosaur.

“By this time, a variety of dinosaurs used feathers for flight and insulation from the cold,” said Persons. “This shows that by the late Cretaceous, dinosaurs were doing everything with feathers that modern birds do now,” said Persons.

In addition to feathered-tail waving, oviraptors also had prominent bone crests on their head, which Persons says the dinosaurs also may have used in mating displays.

“Between the crested head and feathered-tail shaking, oviraptors had a propensity for visual exhibitionism,” said Persons.

Persons, a PhD candidate in paleontology at the U of A, was the lead researcher on the paper, which was published Jan. 4 in the international journal Acta Palaeontologica Polonica.