Dinosaurs' teeth offer clues to understanding how and what they ate

Though their bites were the same, carnivorous dino diets varied due to tooth shape, study shows. 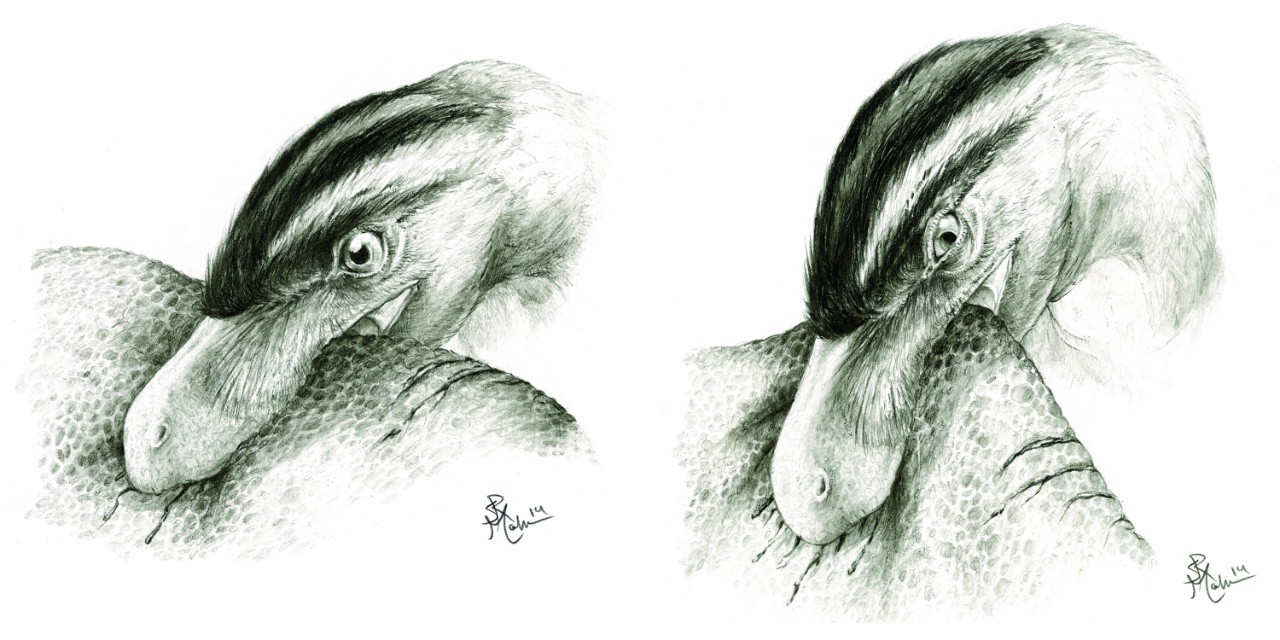 Saurornitholestes, a small meat-eating dinosaur, bites down into the flesh of a duck-billed dinosaur (left) and pulls its head backwards. Researchers reconstructed the biting movements by looking at scratches left on the teeth during feeding. (Illustration: Sydney Mohr)

While most carnivorous dinosaurs bit and chewed in the same way, the shape and strength of their teeth determined their prey, according to a new study by University of Alberta paleontologists.

The researchers compared the teeth of three major types of carnivorous dinosaurs, paying particular attention to the serrations—or denticles—as well as the scratches left on the teeth during chewing, known as microwear patterns.

“We found the microwear patterns were similar in all of the teeth we examined, regardless of the size of the dinosaur, the size of the tooth or the shape of the denticles,” explained Ryan Wilkinson, an undergraduate student in the Department of Biological Sciences and co-author on the study.

Rather, the shape and strength of the dinosaurs’ teeth made them more or less vulnerable to breakage, forcing them to select different types of prey.

“The large hooked denticles of troodontids acted like a lever and caused high stress within the denticles and the tooth, which may cause the tooth to break,” said Wilkinson.

“The main results tell us that dromeosaurids were well adapted for handling struggling prey or for processing some bone as part of their diet, whereas troodontid teeth may have favoured softer prey,” added Angélica Torices Hernández, a former post-doctoral fellow at the U of A and current faculty member at Universidad de La Rioja in Spain.

The scientists also noted a consistency in the way these dinosaurs bit and chewed.

“The microwear patterns indicated there were two motions that occur during a bite,” explained Wilkinson, who participated in the study under the supervision of Phil Currie, famed U of A paleontology professor and Canada Research Chair in Dinosaur Paleobiology. “There was initial plunging cut vertically into the food item, followed by an oblique cut at a 30- to 40-degree angle as the theropod pulls its head backwards as it continues to bite down.”

The research was conducted in collaboration with U of A alumna Victoria Arbour, currently an NSERC post-doctoral fellow at the Royal Ontario Museum. The paper, “Puncture-and-Pull Biomechanics in the Teeth of Predatory Coelurosaurian Dinosaurs,” is published in Current Biology.