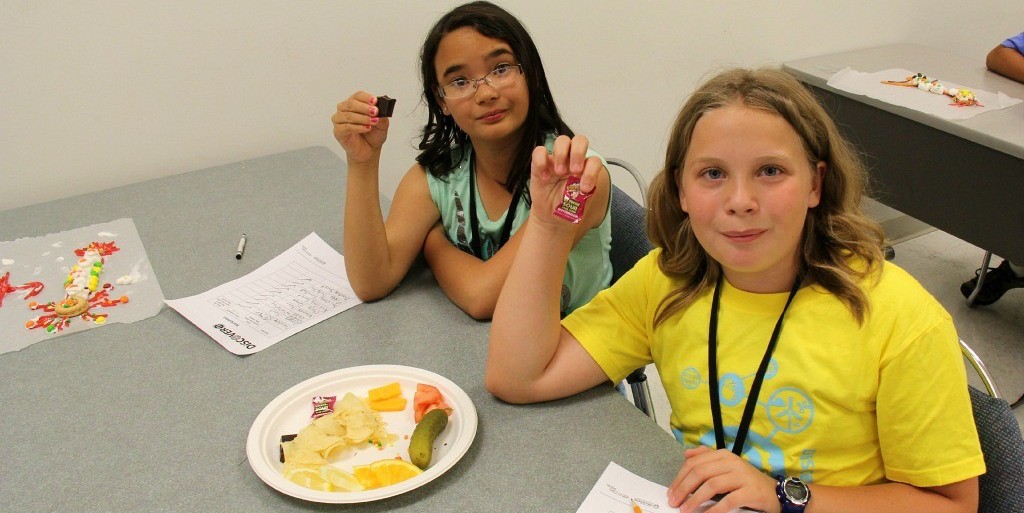 DiscoverE campers learned about how the sense of taste works, and how to change it, in a week-long biomedical design camp. DiscoverE camps run all summer until the week of Aug. 24.

(Edmonton) You might think biomedical engineering is too complex a subject for youngsters fresh out of Grade 6—but you’d be mistaken. A group of future engineers literally and figuratively ate up lessons during a DiscoverE summer camp last week.

The highlight of the week-long Biomedical Design camp, in which participants learned about physical systems, cells and our senses, was a segment on taste. After talking about the spectrum of tastes ranging from sweet to bitter, camp leaders gave the young students a chance to tweak their taste buds.

After trying samples of Miracle Berry (Synsepalum dulcificum—a plant known to alter our perception of taste), campers were invited to sample a variety of familiar foods.

One camper who volunteered to taste Tabasco sauce said she was surprised by the difference.

“It’s like you can feel the spice in your mouth, but you can’t taste it,” she said. “Did you try the tomatoes? They were very sweet!”

Her deskmate, a friend who has enrolled at DiscoverE summer camps since Grade 4, said it was like “rediscovering what taste would be like—if we didn’t have the sense of taste that we do.”

Another young camper suggested parents could deploy the Miracle Berry pills around the dinner table to kids who don’t want to eat their vegetables.

“It was like everything tasted backwards,” another student said. “It blew my mind.”

Camp instructors Jack Xiao and Emily Jeong say teaching the youngsters about biological systems was a fun way to start a summer-long series of DiscoverE camps, which run until the week of Aug. 24. The two led the class in an interactive way, constantly asking the kids to come up with answers to questions, and explanations for why things work the way they do.

“School is over for these guys. They don’t want to be in a classroom, so we have to keep it fun,” said Xiao, who is studying electrical engineering after earning a degree in biochemistry.

Jeong, who recently graduated with a degree in bioscience, says she’s happy to be sharing her passion for STEM subjects (science, technology, engineering and math) with the next generation. “STEM is something I’m really passionate about, and it’s great to see how these kids are problem solvers. Toward the end of the week you could see them connecting the dots between things we’d covered in previous sections. Some of the answers they give us are really complex.”

So, is it possible for kids to learn and have fun at the same time? The participants seemed unanimous on that point. One camper says summer just wouldn’t be summer without DiscoverE.

“It’s fun—I bet I couldn’t go one summer without being in DiscoverE. The instructors are great, the activities are amazing and you learn a lot by the end of the week."