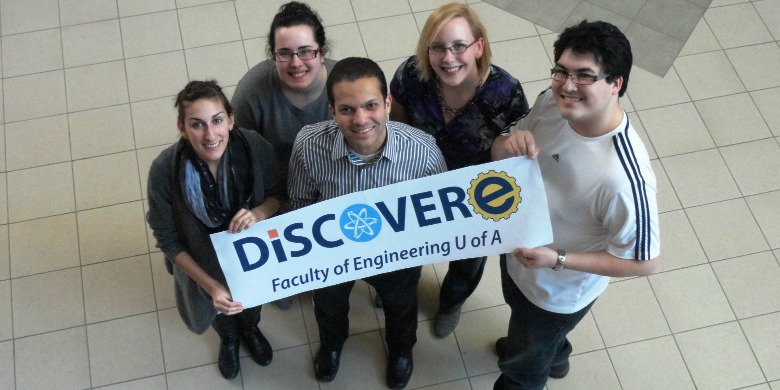 (Edmonton) DiscoverE, a youth outreach program run by the University of Alberta’s Faculty of Engineering, has won a Google RISE (Roots in Science and Engineering) Award for its achievements in increasing access and interest in engineering, technology and science.

“It’s really great news, and great recognition for all of the people who put so much passion and energy into DiscoverE,” said Mohamed El-Daly, outreach co-ordinator in the Faculty of Engineering and director of DiscoverE.

DiscoverE is the first Canadian organization ever to win the Google RISE Award. Judges cited the program’s overall impact, but also singled out its accomplishments in empowering girls and under-represented communities.

In 2012, DiscoverE connected with 22,884 young people in 70 communities across Alberta and the Northwest Territories—and about 38 per cent of all participants were girls. Nearly 4,000 Aboriginal youths participated in camps, workshops and special events. After-school programs are also offered in some city schools.

The award includes $20,000 in funding, which El-Daly says will support technology camps at the Alexis First Nation, in the city of Grande Prairie and in Yellowknife, N.W.T. It will also support computer or technology sessions at after-school clubs and community centres.

DiscoverE will also be represented at an international conference in London in June, sharing ideas and experiences with other RISE Award-winning programs from around the world.

“All of the recipients will come together to discuss their programs, share best practices and learn from each other,” El-Daly said. “It is a really valuable opportunity to see what is happening and to get inspired by what other people are doing.”

That has already happened, to a degree. El-Daly says he may try to incorporate ideas from a program in Africa, which teaches young people to use computer technology to solve community problems, into a new “Android App-lication camp” being added to DiscoverE’s selection of summer camps this year.

“We will be teaching them how to build their own app and upload it on their own phone. And if we can get them to work on something related to communities, that would be phenomenal,” said El-Daly, who is working on his PhD in civil engineering, specializing in water resources.

“We talk to our participants about how science and technology are related to communities. We say that engineering advances the community and the betterment of our lives, and it’s true. Besides them learning, we want them to discover that what they do can have an impact locally and internationally, that what they learn here can have an impact on the world. It can go above and beyond.”