Discovering the mother of all bison 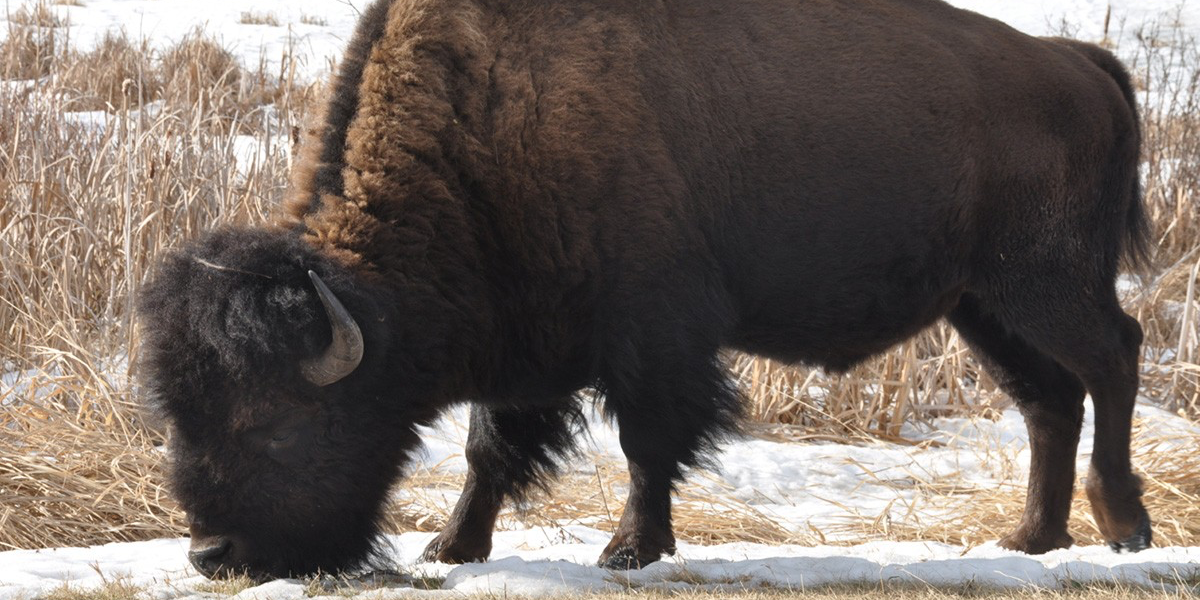 Unlike other notorious invaders such as zebra mussels, bison were not introduced by humans, but their rapid spread and diversification in North America are hallmarks of an invasive species.

Scientists from University of Alberta have pinpointed when bison first appeared in North America and learned more about their family tree, thanks to new fossils and genetic tools.

New research by Duane Froese and Alberto Reyes in the Department of Earth and Atmospheric Sciences has identified North America’s oldest bison fossils and applied new techniques for ancient DNA extraction to clarify the earliest parts of the bison family tree.

Froese and his colleagues worked with paleogeneticists to sequence the mitochondrial genomes of more than 40 bison, including the two oldest bison fossils ever recovered: one from Ch’ijee’s Bluff in the Vuntut Gwitchin Territory in northern Yukon, and another from Snowmass, Colorado. Comparing these genomes with those of additional Siberian and North American bison, the researchers constructed an age-calibrated bison family tree and established that a common maternal ancestor arrived between 130,000 and 195,000 years ago.

“The geological record of bison fossils that we recovered was consistent with the genetic record from the fossils,” said Froese.

Froese and his colleagues have recovered bison and other megafauna remains from Yukon and Alaska sites for many years and had found several fossils in the Yukon that dated to a period of warm climate 125,000 years ago. “But because that was a time of high global sea level, they must have come over from Asia sometime prior to that when the Bering Land Bridge was exposed,” said Froese.

“We were fortunate with a fossil recovered from northern Yukon that was found adjacent to a well-dated volcanic ash,” noted Reyes, who discovered the ancient steppe bison fossil, Bison priscus, in northern Yukon.

It took several years to yield the genetic story of these fossils. Working with paleogeneticist Beth Shapiro at University of California Santa Cruz, the first efforts to recover DNA were not successful.

“The DNA was too degraded, but as techniques have developed, in particular new ways to 'fish out' bison DNA from the mixture of bacterial and other DNA in these bones, these have allowed us to piece together these genome sequences,” explained Shapiro.

The group showed that DNA of the earliest Yukon bison was similar to DNA from a giant long-horned bison, called Bison latifrons, which was excavated in Colorado.

“Bison latifrons is an interesting beast,” said Froese. “Its horns measured more than two metres across at the tips and it was perhaps 25 per cent larger than modern bison.”

The Colorado fossil was well dated and only 10,000 to 20,000 years younger than the Yukon fossils. And, despite being considered a different species based on skull morphology and size, the genetics showed that the two fossils were closely related.

“Bison dispersed into North America by a natural geographical and ecological phenomenon—the Bering Land Bridge—about 130,000 years ago when sea level was much lower than today,” explained Froese. “They were so well adapted to the plains ecosystem, they quickly colonized the continent.”

Unlike other notorious invaders such as zebra mussels, purple loosestrife or Asian carp, bison were not introduced by humans. But their rapid spread and diversification are hallmarks of an invasive species—and part of what make bison a keystone herbivore in the Great Plains ecosystem. “In a way, North American bison are really an invasive species, though perhaps not in the common sense of the term,” said Froese. “They were remarkably successful when they entered North America and interrupted a grazing ecosystem that had been dominated by horses and mammoths for at least the previous million years.”

The paper, “Fossil and genomic evidence constrains the timing of bison arrival in North America,” was published in Proceedings of the National Academy of Sciences in March 2017.

Discovering the mother of all bison
Newsroom