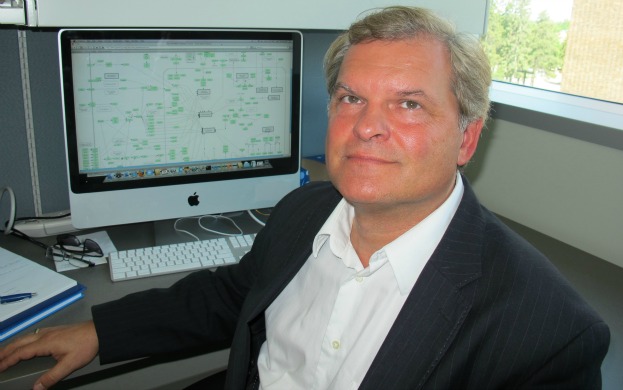 120621-jacktuszynski-banner
Jack Tuszynski shows a computer model of a complex, "disorganized" type of cancer, which his research has revealed is harder to treat than simpler forms.

(Edmonton) Medical researchers at the University of Alberta reviewed test results from thousands of patients with various types of cancer and discovered that “disorganized” cancers were more difficult to treat—and consistently resulted in lower survival rates.

Principal investigator Jack Tuszynski says physicians could use a mathematical equation, or algorithm, to determine how disorganized their patients’ cancer is. They could then pinpoint which cancer treatment would be most effective. Some cancer drugs are effective at treating simple cancers, whereas others are designed to attack complex cancers. The current emphasis in cancer treatment is to inhibit “traffic systems” in cancer, says the researcher.

“Using a math equation, doctors could predict whether a given therapy will be successful, which would spare the patient from suffering,” says Tuszynski, who holds the Alberta Cancer Foundation-funded Allard Research Chair in Oncology with the Faculty of Medicine & Dentistry at the University of Alberta. “Instead of spending millions of dollars on clinical trials to find better cancer drugs, algorithms could be used to better pinpoint treatment instead.”

The research conducted by Tuszynski, a summer student, and research colleagues in Boston was recently published in the peer-reviewed journal Proceedings of the National Academy of Sciences (PNAS). The U of A duo looked at 14 types of cancer, including those with high survivability, like prostate cancer, and those with high death rates, such as pancreatic cancer.

Each type of cancer has its own unique “metro map,” says Tuszynski.

“These traffic signalling systems inside cancer cells look like transportation hubs or metro maps, so you can measure how many stations and how many lines you have,” says Tuszynski, who has a joint appointment in the Department of Oncology and the Department of Physics in the Faculty of Science.

“The surprising part is, the more disorganized the traffic signalling system, the more robust and stubborn the cancer is against chemotherapy. If cancer cells have a complex metro map with lots of branches at various locations, then the cancer is very hard to paralyze.

“This research discovery has given us a glimpse into an important issue in cancer treatment. The finding is very telling.”

The Alberta Cancer Foundation, which funded the research, is excited about the discovery.

“Dr. Tuszynski’s work in computational biophysics promises to create more personalized treatment for cancer patients by targeting the cancerous cells while reducing side-effects to healthy cells,” says Myka Osinchuk, CEO of the foundation. “This latest research discovery will help push the pace of discovery and we are excited to hear more about the progress being made in this area.”

Tuszynski is continuing his research and expects to publish more related findings soon.