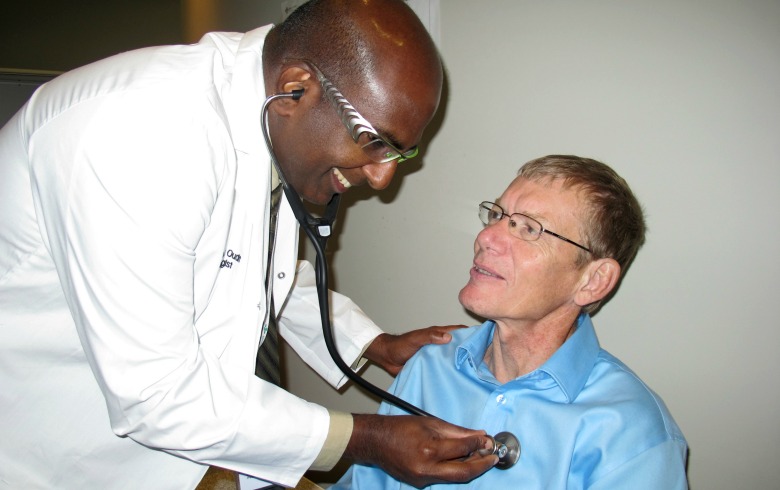 (Edmonton) A genetic condition that attacks multiple organs and usually results in fatal heart problems can be detected using a new MRI technique that was developed at the University of Alberta. The discovery of this new diagnostic tool has resulted in updated clinical guidelines for the diagnosis and treatment of Fabry disease in Canada.

Faculty of Medicine & Dentistry researchers Gavin Oudit and Richard Thompson worked with colleagues Kelvin Chow and Alicia Chan on the discovery, as well as with Aneal Khan from the University of Calgary. The findings were recently published in the peer-reviewed journal Circulation: Cardiovascular Imaging, and involved 31 Alberta patients who have the disease.

Thompson and trainee Chow developed the MRI technique known as T1 mapping, which can detect heart damage and changes at early stages—earlier than regular MRI scans or ultrasound. When this type of MRI is used on patients with Fabry disease, the scans can detect both the disease and the severity of damage to the heart. The T1 mapping method developed by Thompson’s group can be easily programmed onto MRIs around the world.

“This test can uniquely identify Fabry disease by detecting microscopic changes in the heart muscle structure that are not visible on regular images,” said Thompson, who works in the Department of Biomedical Engineering. “Fabry disease can look like other diseases if you only look at the whole heart structure or function, but this T1 mapping test, which can detect the tiniest changes in the heart, could identify all patients with Fabry disease.”

Oudit added, “It is very likely that this technique will become a key part in clinical examination of patients with Fabry disease. This finding will advance the clinical care of these patients around the world. The implications will be widespread.

“Heart disease is the number one cause of death for patients with Fabry disease. The earlier the disease can be pinpointed, the sooner treatment can start. The treatment for the disease halts the condition and prevents serious damage to the heart.”

Fabry disease is a genetic metabolic condition that destroys the enzyme involved in fat metabolism. This enzyme breaks down fat, so without it, people with the disease accumulate deadly fat deposits in their heart, kidneys and brain. The condition affects one in 1,500 to 3,000 people, but was originally thought to be a rare disease. Some countries now screen newborns for the condition, which costs $200,000 a year to treat through monthly infusions called enzyme replacement therapy. Symptoms of the disease include heart failure, thickened walls of the heart, exercise intolerance, fluid buildup in the legs, blackouts, inability to lie down, strokes, tingling in the hands and feet, and changes in skin pigmentation.

It is estimated that about 1,000 Albertans are living with the disease, but not everyone who has the condition has been diagnosed. Sometimes people will see scores of kidney and heart specialists for years before anyone diagnoses the condition. Men can have a blood test to identify the condition, whereas women—who may also carry the disease without showing symptoms—need to undergo genetic testing.

Adrian Koning, who has Fabry disease and has worked with Oudit in the past, said the research breakthrough is very exciting. He was 43 years old before he was diagnosed. He had hearing problems, suffered pain, couldn’t gain weight and had serious kidney problems before specialists discovered what was wrong.

“I’m very excited and positive about it because there’s another tool where Fabry patients can get access to proper diagnosis and treatment," Koning says. "The earlier people start enzyme replacement therapy, the better off they will be in the long term. Many of us believe that a cardiac MRI will become a standard tool throughout the world for diagnosing Fabry patients…. It’s exciting to find another tool to help people with this serious, life-threatening disease.”

‘A wonderful story of collaboration’

The T1 mapping test can both pinpoint the disease and assess damage to the heart.

Oudit says the discovery of the new MRI technique “is a wonderful story of collaboration—of patients, clinicians, scientists and industry working together to find a new diagnostic tool.” Oudit is a heart-failure specialist who works in the Division of Cardiology in the Department of Medicine at the Mazankowski Alberta Heart Institute.

“As an organization, we are excited to be part of these developments through the research from the University of Alberta,” said Mauro Chies, acting vice-president of clinical supports for Alberta Health Services. “This is a significant advancement in the detection of disease in a non-invasive environment for our patients. We hope to be able to advance these sequences on our MRIs in the near future, and look for ways to use it to evaluate and detect other disease conditions.”

Thompson and Oudit are continuing their research in this area and are currently working with scientists in the United Kingdom.

The research was funded by the University Hospital Foundation and Alberta Innovates – Health Solutions. In addition, the project was done in collaboration with Siemens Canada and Siemens Healthcare USA.

The research was also funded in part through the University Hospital Foundation’s Medical Research Competition, which directs up to $500,000 annually to support 20 to 25 research projects. The competition is administered in partnership with the Faculty of Medicine & Dentistry.