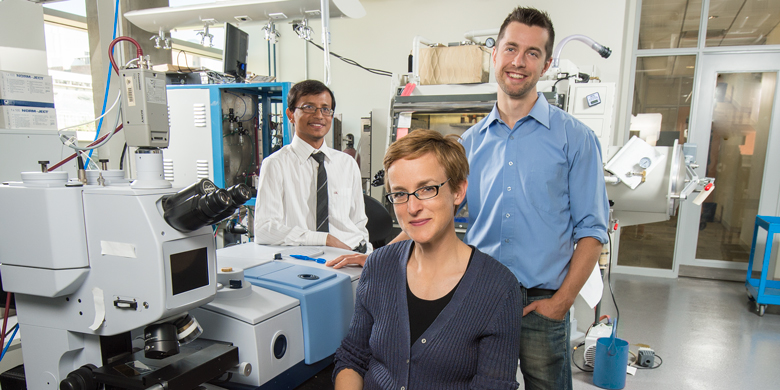 (Edmonton) University of Alberta researchers have found that abundant materials in the Earth’s crust can be used to make inexpensive and easily manufactured nanoparticle-based solar cells.

The discovery, several years in the making, is an important step forward in making solar power more accessible to parts of the world that are off the traditional electricity grid or face high power costs, such as the Canadian North, said researcher Jillian Buriak, a chemistry professor and senior research officer of the National Institute for Nanotechnology based on the U of A campus.

Buriak and her team have designed nanoparticles that absorb light and conduct electricity from two very common elements: phosphorus and zinc. Both materials are more plentiful than scarce materials such as cadmium and are free from manufacturing restrictions imposed on lead-based nanoparticles.

“Half the world already lives off the grid, and with demand for electrical power expected to double by the year 2050, it is important that renewable energy sources like solar power are made more affordable by lowering the costs of manufacturing,” Buriak said.

Buriak collaborated with U of A post-doctoral fellows Erik Luber of the U of A Faculty of Engineering and Hosnay Mobarok of the Faculty of Science to create the nanoparticles. The team was able to develop a synthetic method to make zinc phosphide nanoparticles, and demonstrated that the particles can be dissolved to form an ink and processed to make thin films that are responsive to light.

Buriak and her team are now experimenting with the nanoparticles, spray-coating them onto large solar cells to test their efficiency. The team has applied for a provisional patent and has secured funding to enable the next step to scale up manufacture.

The research, which was supported by the Natural Sciences and Engineering Research Council of Canada and the Canada Foundation for Innovation, is published in the latest issue of ACS Nano.

Along with this latest nanoparticle discovery at the U of A, Buriak is also on an international research team proposing a global project to develop solar energy technology. The proposal was recently chosen as a finalist in the Global Call for Ideas by the Canadian Institute for Advanced Research. Buriak is working with fellow scientists from Harvard University, the University of Toronto and Vrije Universiteit Amsterdam to develop a full research program proposal that will be submitted for consideration by February 2014. The team is focused on a global initiative to develop next-generation solar energy-harvesting science and related technologies.