Discovery could usher in new ice age of astrophysics 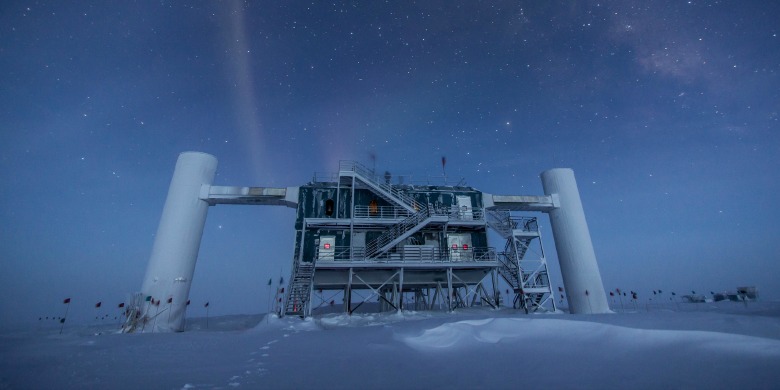 131121-icecube-banner
The IceCube Laboratory, a particle detector made from one cubic kilometre of ice in Antarctica, has confirmed the existence of extraterrestrial neutrinos. More than 250 scientists from around the globe are involved in the project, including UAlberta's Darren Grant, who leads IceCube efforts in Canada. (Photo: Felipe Pedreros. IceCube/NSF)

(Edmonton) Scientists using a particle detector made of ice at the South Pole have found the first indication of high-energy neutrinos that originate outside of the solar system.

“This is a huge result. It could mark the beginning of neutrino astronomy,” said Darren Grant, assistant professor of physics at the University of Alberta, who leads the IceCube Collaboration effort in Canada. The collaboration is led by the University of Wisconsin-Madison and involves 250 physicists and engineers from the United States, Germany, Sweden, Belgium, Switzerland, Japan, New Zealand, Australia, the U.K. and Canada.

Neutrino researchers have been looking to the sky for decades to learn more about the elusive particles. Until now, scientists have seen low-energy neutrinos that originate in Earth’s atmosphere, neutrinos from farther out within the solar system, and neutrinos from one rare nearby supernova, known as 1987A.

The neutrinos observed by IceCube are different. “They are at a significantly higher energy level than those produced by the previously measured sources,” Grant said. If the observation is confirmed, scientists will have found high-energy neutrinos from yet-to-be confirmed cosmic sources.

Sensors embedded deep in IceCube—a particle detector made from one cubic kilometre of ice in Antarctica—were designed to detect extraterrestrial neutrinos. From there, researchers relied on access to the Jasper computer cluster located at the U of A, managed by the WestGrid consortium as part of Compute Canada’s national platform of advanced research computing infrastructure. The computational studies to analyze the data often consumed 1,000 CPUs (central processing units) in one day, with a peak use of 1,900 CPUs. In total, the project amassed more than 600,000 CPU hours on WestGrid’s cluster.

“We wouldn't have been able to perform these studies without the WestGrid cluster in the time we did it,” said Claudio Kopper, one of the Madison post-doctoral fellows who developed the analysis. “When I started, getting over 1,000 cores in parallel on Jasper was not uncommon. Having a fast turnaround time with many available cores turned out to be extremely valuable.”

“This is an exciting milestone in neutrino research and we’re pleased that Jasper, one of WestGrid’s most powerful computing clusters, could support the work that led to this discovery,” said Lindsay Sill, interim executive director of WestGrid. “This is an excellent example of how access to high performance computing resources enables scientists to tackle data-intensive research questions and push the boundaries of what we thought was possible.”

U of A graduate students helped to prepare this set of data for analysis. “Tania Wood and Sarah Nowicki are working on the calibrations for the detector to better understand how the light produced in the neutrino interactions travels through the glacier,” said Grant. Wood and Nowicki are also doing work that will have more central significance to upcoming observations being made at lower energy levels. Three U of A undergraduate students who assisted in the IceCube detector calibrations and data handling are also co-authors of the paper: Stephanie Bohaichuk, Chris Sheramata and Dylan Grandmont.

“We are still learning about the neutrino as one of nature's fundamental particles,” said Grant. “It was only 15 years ago that we discovered neutrinos have a small mass, but we have yet to learn which neutrino is heaviest, what we call the hierarchy. This is what we are designing PINGU to provide: a first definitive measurement.”

Details of the research will be published in the Nov. 22 issue of the peer-reviewed journal Science.

Discovery could usher in new ice age of astrophysics
Newsroom