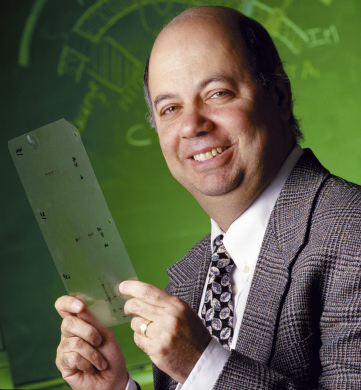 (Edmonton) Molybdenum is an essential metal required in all living beings, from bacteria and plants to humans. Yet as vital as this metal is, no one has understood the importance of its structure—until the Faculty of Medicine & Dentistry’s Joel Weiner and his team jumped on the case.

Molybdenum proteins play critical roles in human health. Molybdenum does not act alone but is found attached to certain proteins, called molybdenum-enzymes, by a very large organic molecule. The organic molecule that holds the molybdenum in place in a protein is extraordinarily complex and “expensive” for the cell to make. But thanks to Weiner, it should now make sense to scientists.

For starters, the research group found that the molecule occurs in nature in two forms, based on their appearance: flat or distorted. Using a group of bacterial enzymes that contain both the flat and distorted molecules, Weiner’s team was able to show that the two forms have very different functions. The distorted molecule plays a role in the transfer of electrons to the molybdenum, whereas the flat molecule prepares and co-ordinates positioning of the enzyme so it can be part of a biochemical reaction.

“This is important because molybdenum is so essential throughout biology,” said Weiner. “We need to understand why the cell goes to all this trouble.”

The distorted form is found in proteins involved in metabolic, respiratory and cardiac diseases. The flat form occurs in a protein required for brain development, and defects cause death in infancy. Understanding of the flat form could help lead to treatment of these defects.

It all started for Weiner and his research group in the Department of Biochemistry about three years ago. Although scientists worldwide had known the overall structure of molybdenum in proteins for many years, no one understood why it is so complicated. It was a summer student, Matthew Solomonson, who noticed that one of the structures holding molybdenum was very flat, whereas the other group was distorted. As curiosity-based research often goes, Solomonson and Weiner’s research team wondered whether the difference was significant—and it was.

“When you bring in a new student, it’s really good, because they have a fresh way of looking at things,” says Weiner of Solomonson, who is now a graduate student at the University of British Columbia.

“This discovery is a major one for my lab and will have a huge impact on molybdenum biochemistry research.”

Now, the team will use protein engineering techniques to change the protein environment around the molybdenum.

“This is a critical next step,” said Weiner. “We hope to finally start understanding the chemistry of these enzymes at atomic resolution, and to modulate their activities to better understand human disease and explore potential biotechnology and biomedical applications.”

The team’s work was published Aug. 27 in the high-impact journal Proceedings of the National Academy of Sciences. The study was funded by the Canadian Institutes of Health Research.