U of A medical researchers take significant step toward improving cancer care. 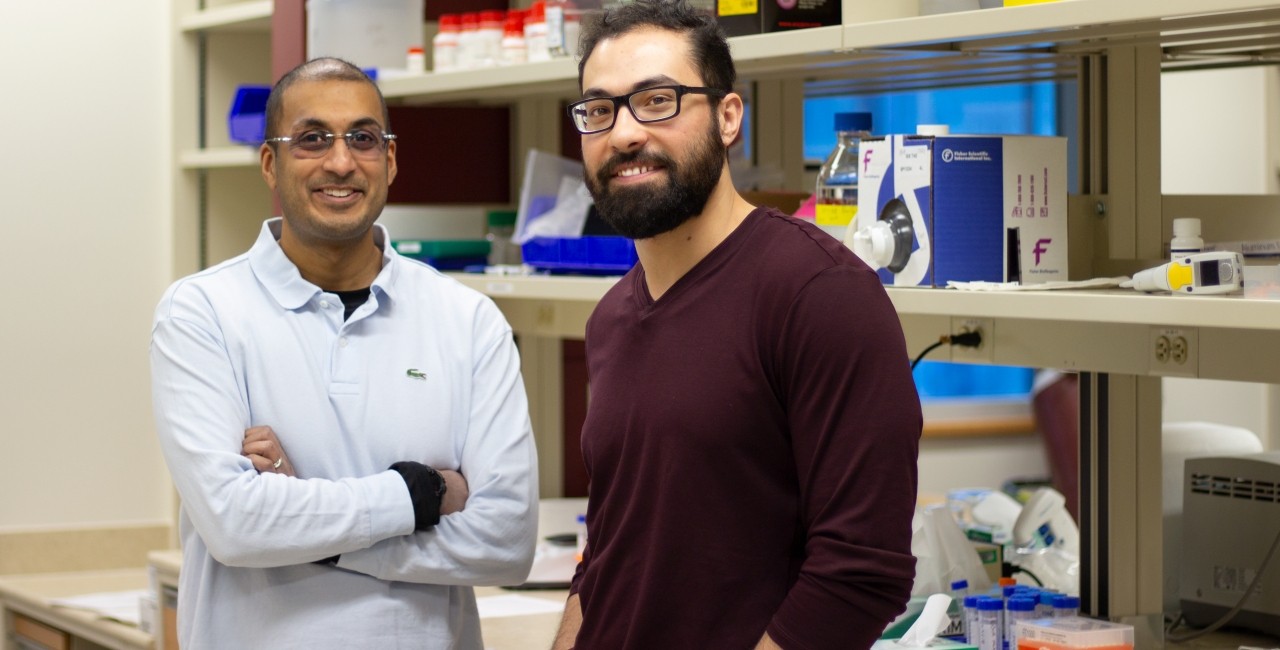 U of A medical researchers Gopi Sutendra (left) and Bruno Saleme found that targeting a specific protein called PKM2 with a drug compound can prevent chemotherapy from damaging the heart while enhancing its effectiveness against cancer. (Photo: Jordan Carson)

Researchers from the University of Alberta may have found a way to make chemotherapy more effective at treating cancer while blocking its harmful side-effects on the heart.

While chemotherapy can be an effective treatment for cancer, the aggressive attack on cancer cells often cause damage to other cells throughout the body, including the heart, making patients more prone to develop heart problems years down the road.

“At the clinical level, we’ve known for some time that heart dysfunction from chemotherapy is a major issue, but at the scientific level, we've only recently begun to look at signalling pathways that may be implicated in this condition,” said Gopi Sutendra, Alberta Innovates Translational Health Chair in Cardio-oncology at the U of A.

“This is the first targeted therapy at the preclinical level to actually prevent the side-effects of chemotherapy on the heart and simultaneously enhance tumour regression.”

The team found that the oxidation of proteins—a process that requires oxygen—was preferentially increased in the heart. By stabilizing a specific metabolic protein called pyruvate kinase M2 (PKM2)—also preferentially oxidized in the heart—with a drug compound, the researchers completely prevented heart damage from the chemotherapy, and enhanced the potency of the chemotherapy against lung tumours in preclinical mouse models.

According to Sutendra, chemotherapy affects all tissue, but the heart is especially susceptible. While most other cells will recover quickly, heart cells regenerate more slowly, making damage nearly irreversible. Because of that, protecting heart cells before the damage is done is vitally important.

The researchers hope the findings will soon be able to be tested in clinical trials with similar drugs that stabilize PKM2.

“The beauty of our work is that many of these drugs are already being tried in early-phase clinical trials for other diseases,” said Sutendra. “We're really happy because we think that we can push it to the next phase where hopefully patients can start seeing some of these treatments in the near future.”

“We also believe the implications of our work may extend to other forms of heart failure as well,” added Bruno Saleme, first author on the study and a recent recipient of the Alberta Innovates Graduate Scholarship.

The research, published as a cover story in Science Translational Medicine, was supported by funding from the Canadian Institutes of Health Research, the Heart and Stroke Foundation and the Alberta Innovates Translational Health Chair in Cardio-oncology.