Discovery of binary star system could make waves in physics 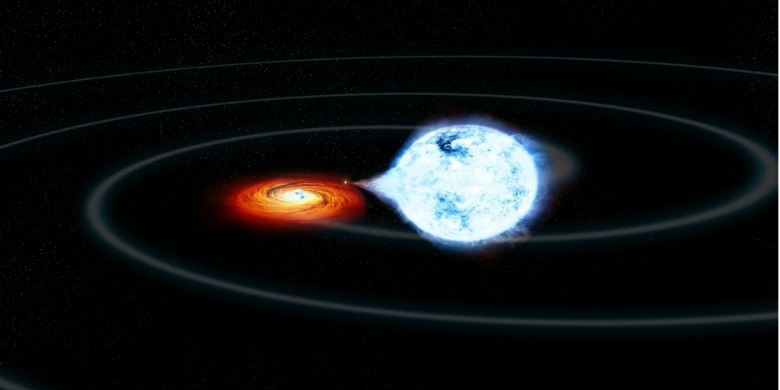 131219-am-cvn-nasa-banner
In this illustration of an AM CVn binary star system, a small, heavy white dwarf star pulls material from its larger but less dense companion star. This week, astronomers announced the first observation of one of these rare double-star systems in its developing stages. (Image: NASA/CXC/M. Weiss)

(Edmonton) An international group of space researchers including a University of Alberta physicist has made a discovery that could have a ripple effect on the science of gravity.

This week, astronomers announced the first observation of a type of double-star system (known as AM CVn) in its developing stages. Many researchers expect that these systems may eventually provide proof of a major prediction of Einstein’s theory of gravity (also known as the theory of general relativity).

Craig Heinke, an astrophysics professor in the U of A’s Faculty of Science, was involved in the finding, which was based on new data from NASA’s Chandra X-ray Observatory and the European Space Agency’s XMM-Newton telescope.

“We discovered binary stars that, as they come closer, will eventually produce gravitational waves, transfer mass and finally lead to major explosions—either a supernova or an explosion roughly one-tenth as large,” said Heinke, who analyzed the Chandra X-ray data and came up with the method of using X-ray observations to rule out neutron stars in the binary systems. The absence of neutron stars was key to confirming that the researchers were looking at a double star that will become an AM CVn system.

“This is the first discovery of stars that will evolve into AM CVn systems,” Heinke said. “AM CVn systems should create gravitational waves, which actually stretch space as they travel, according to Einstein’s theory of gravity. Our detectors aren’t powerful enough to detect them yet, but the Europeans’ planned eLISA space antenna (scheduled to launch in 2034) should detect gravitational waves from several known AM CVn systems.”

AM CVn stars are a rare phenomenon in which one white dwarf pulls material from a compact companion star, such as a second white dwarf. Chandra and optical telescopes were used to identify two systems of binary stars that will one day become AM CVn systems. Scientists predict that as the orbit between these white dwarfs shrink, ripples in space-time will be given off.

Though this discovery could lead to better understanding of AM CVn star systems, Heinke says the discovery’s greatest significance could be verification of Einstein’s theory that rapidly accelerating masses emit gravitational waves.

Much as the discovery of the Higgs boson was the last major piece to prove the standard model of particle physics, the existence of gravitational waves would confirm the theory of gravity as fact.

Says Heinke, “If we don’t detect gravitational waves from AM CVn systems, we would be forced to find a replacement for Einstein’s theory of gravity.”

Discovery of binary star system could make waves in physics