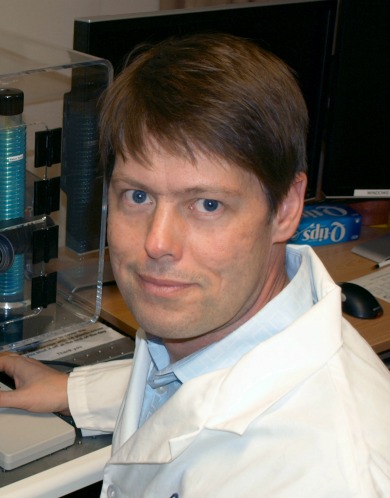 (Edmonton) A prostate cancer researcher at the University of Alberta and his team have discovered how to improve currently available cancer drugs so the medication could be personalized for individual patients.

John Lewis, a researcher in the Faculty of Medicine & Dentistry, published his team’s findings in the peer-reviewed journal ACS Combinatorial Science earlier this year. He worked with colleagues from Western University in Ontario and the U of A on the project.

In the article, the team outlines a breakthrough in how current drug treatments could be improved.

“We've developed a screening technology that uses living cancer cells to create custom-targeted cancer drugs,” said lead author Choi-Fong Cho. “This opens up the opportunity to take tumour cells from patients and create drugs that can be specifically used against each patient’s cancer cells. We could take existing cancer drugs and tweak them to directly home in on each patient’s cancer.”

Lewis explains that each cancer is like a lock for which we don't have a key. This screening technology could be used to look for unique strings of amino acids that recognize a patient’s cancer cells—“like sifting through a big bag of eight billion keys”—to find the one that works for each patient. Existing drugs can then be adapted to target just the cancer cells, and not healthy cells.

Further research is needed to see whether patients with certain types of cancers have the same “keys” or biomarkers, so that one adapted drug could treat patients with prostate cancer, or those with pancreatic cancer, as an example.

But each adapted drug needs to be evaluated with clinical trials, cautions Lewis. However, he says, “Cancer research and treatment is headed in the direction of personalized medicine, so the approval process may become more streamlined in the future.”

Lewis and his team are continuing their research in this area. They are starting to recruit patients for the screening part of their research, to see how many unique “keys” or markers are found in the cells of cancer patients and whether the markers vary with different types of cancer.

The authors of the study included Choi-Fong Cho of the U of A, and Babak Behnam Azad and Leonard Luyt of Western University. Their research was funded by Prostate Cancer Canada, in part with funds raised during the Movember campaign, and by the Ontario Institute for Cancer Research.