Pediatrician finds that alternative medicine use is common among patients in children's hospitals, but they aren't always telling their physicians about it. 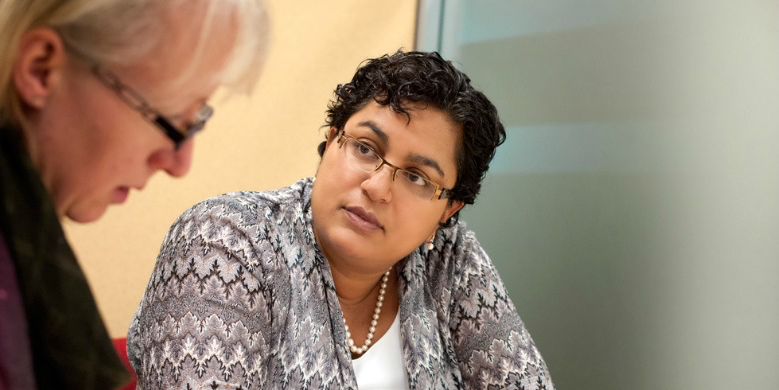 Sunita Vohra meets with a colleague. Vohra's latest research focuses on whether kids are using alternative medicines and how effective those products and practices are seen to be. (Photo: Richard Siemens)

In the field of medicine there has often been a divide between those who focus on modern medicine and those who prefer alternative practices. But pediatrician Sunita Vohra is a firm believer there should be room for both.

A new study from Vohra, a professor in the Faculty of Medicine & Dentistry’s Department of Pediatrics at the University of Alberta and a pediatric physician for clinical pharmacology with Alberta Health Services, is giving insight into the use of alternative medicines by pediatric cardiac patients and how effective they are seen to be. “We wanted to know if the use of alternative therapies helped or not, and we wanted to know if it hurt them or not,” she says.

The study, published in the journal CMAJ Open, examined the use of alternative therapies such as multivitamins, minerals, chiropractic care and Aboriginal healing in 176 patients at the Stollery Children’s Hospital in Edmonton, Alberta, and the Children’s Hospital of Eastern Ontario in Ottawa.

It showed that 64 per cent of patients at the Stollery reported using complementary and alternative medicine products and practices, compared with just 36 per cent at the Ontario hospital. Of those patients, Vohra says most had no regrets about their choices.

“The vast majority felt that they had been helped by the complementary therapy that they took, and it was extremely unusual for them to report that they felt an adverse event had occurred because of it.”

The study also showed one-third of patients and their families did not discuss the use of alternative medicines with their physicians. Vohra says that suggests patients may be reluctant to discuss their choices if they’re not sure how it will be received by health-care providers.

That decision could have important health consequences, says Vohra, who also serves as director of the Complementary and Alternative Research and Education program at the U of A, noting that patients’ discussing alternative therapies with health professionals is vital for them to make informed choices.

“There may be some therapies that help children feel better, but there may be others that, unbeknownst to the family, cause interaction between a specific natural health product and a prescription medicine. In that setting, instead of helping the child get better, harm may actually be happening.”

Vohra stresses the need for open communication and says children’s hospitals in Canada need to do a better job of providing information to patients looking at other avenues to health.

“That communication is essential because the health-care providers and the parents—together we are a team. And everyone’s hope is for that child’s better health.”

Other highlights from the study

The research was supported by funding from the Sick Kids Foundation and Alberta Innovates – Health Solutions.