Dispelling the myth of a non-political Olympics

UAlberta professor says the inevitability of politics at the Olympics should be embraced as a catalyst for change. 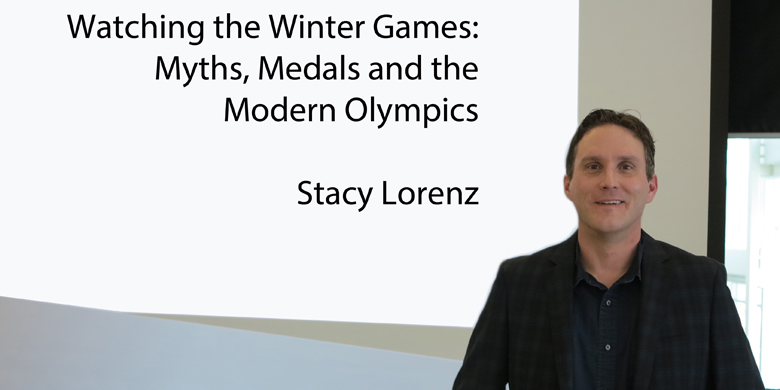 Stacy Lorenz, a physical education professor at the U of A's Augustana Campus in Camrose, says what we think we know about sport is not quite what it seems. As a result, myths play an important role in the modern world of sport.

(Edmonton) The Olympics are mired in myth. They always have been. From the very inception of the Games, notions of nationalism and what athletes represent have been inseparable from physical, social and political ideals.

Stacy Lorenz of Augustana Campus is one of many University of Alberta academics who will be watching what happens at Sochi closely, especially where myth collides with reality. The physical education professor teaches a course on the modern Olympics and is interested in a whole host of issues related to sports, media and popular culture.

For him, the most insistent and problematic Olympic myth is the assumption that the Games are non-political, that they’re meant to be a pure sporting event, during which all of our messy differences are cast aside in the name of global community.

It’s a noble aspiration, he says, but it almost always falls short of that ideal. The most dramatic example is the 1936 Summer Olympics in Berlin, he says. “Nazi Germany hosted the games and really elevated the Games as a propaganda tool for nation-building within their own country, and for generating the image they wanted to portray to the external world.”

But acknowledging the role of politics in any human endeavour does not have to be so blatantly propagandist and self-serving, and Lorenz argues the International Olympic Committee (IOC) misses golden opportunities to make a difference by stubbornly burying its apolitical head in the sand.

“There could be an opportunity to leverage the power of the Olympics to make positive change more frequently,” says Lorenz, pointing to South Africa, which was boycotted from international sporting events between 1964 and 1988 to protest apartheid. It was one of many pressures that eventually brought about an end to the regime, he says.

One striking example of political protest was the 1968 Summer Olympics in Mexico City, when medal winners Tommie Smith and John Carlos raised their gloved fists on the podium to call attention to the plight of African-Americans. “The IOC and the U.S. Olympic Committee really reacted harshly to that,” says Lorenz. “But in hindsight, most people see that as heroic and brave.

“That’s part of what makes the Games important and initiates change—when they do become political.” Lorenz says he wishes the IOC would be more assertive, especially on gay rights, given the widespread condemnation of Russia’s anti-gay laws: “The IOC charter speaks to equality, including no discrimination on the basis of sexual orientation.”

He adds, however, that the IOC ironically uses politics for its own purposes, but shies away from it when not controlling the agenda.

“In Beijing, they had explicitly political reasons for going there—trying to open up China a bit more and perhaps encourage some human rights reform, and there’s nothing wrong with that. But when it becomes messy and ugly and complicated, then suddenly the IOC wants to remove that political edge or suggest, ‘No, this isn’t about politics.’”

Another myth of the Olympics concerns the idea of legacy, says Lorenz. Bidding countries have to demonstrate that facilities left behind when the Olympics are over will tangibly benefit people living in the host country. But holding host countries to account is not always as effective as it could be.

Already there are questions about whether Sochi’s grossly inflated $50-billion construction project will be of any value beyond serving as a resort for the wealthy. It is, after all, the southernmost location in history for a winter Olympics, and can’t even guarantee snow every year. The reasons for choosing Sochi, says Lorenz, go way beyond what’s best for winter sports or the people of Russia.

“Around these games there are clear connections to the nature of politics and links of corruption between big business and the upper levels of the government. Clearly that’s how the Games have been funded and how construction has taken place there,” says Lorenz.

Then there’s the question of the Olympic athlete as physical ideal—also a myth, says Lorenz. As he often tells his students, “High-performance sport is not remotely healthy—it’s not good for your body. It’s actually semi-pathological,” involving frequent, often long-lasting injury.

Depending on the sport, “you’re in distress a lot of the time. We see all the glory, but there’s a high price paid by athletes that I’d like to see more light cast on.

“In fact, I’ll be interested to see if [in network coverage] the Games are covered simply as a sporting event, or whether some of these larger political, social and economic issues enter the conversation.”

Dispelling the myth of a non-political Olympics