Do good to do well, business leader urges grads 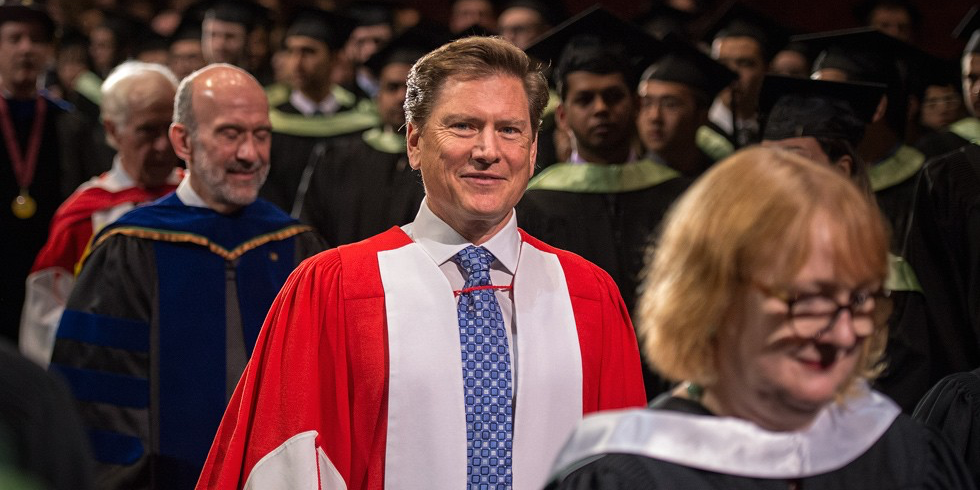 (Edmonton) University of Alberta graduates were urged by one of Canada’s leading businessmen to become tomorrow’s leaders by embracing risk, inspiration and social responsibility.

As a generation of leaders in businesses, governments and non-profit organizations all retire over the next 10 years, the need for new talent is acute, said Darren Entwistle, executive chairman of global telecommunications giant Telus, as he addressed graduates from the U of A faculties of engineering, and pharmacy and pharmaceutical sciences.

Entwistle, who received an honorary doctor of laws degree from the U of A June 5, is a leader in the business world, having served since 2000 as the president and CEO of Telus before becoming executive chairman. Entwistle is the longest-serving CEO in the global telecom industry and under his leadership, Telus has evolved from a regional telephone company to a global communications leader. It’s also led the way in economic performance, delivering a shareholder return of 286 per cent over the past 13 years.

Entwistle was given the Canadian Business Leader of the Year Award by the University of Alberta School of Business in 2010.

In addressing the class of 2014, he challenged them, as the next generation of leaders, to “drive our economy, protect our environment and support our nation’s social health and well-being.

“Your country, Canada, has a deep need for the future leaders in this room, leaders who will leverage their personal resiliency, grit and ingenuity to guide our nation’s development in a complex and increasingly competitive world,” Entwistle said.

Dynamic, fearless leadership will be crucial to influencing business, politics, arts and culture and hopefully have a “profound influence on our social challenges, such as the transformation of health care for the benefit of all citizens,” he noted.

By way of advice, Entwistle offered the graduates a handful of principles he’s used to guide his career and life. He urged them to firstly pursue what inspires them. “In the absence of passion, inevitable challenges can become overwhelming and it becomes far too easy to give in or give up.”

He also advised them to be ready to challenge conventional ways of thinking and take calculated risks, which, while it brings a chance of failure, also creates resiliency.

“Without risk, there is no innovation. Plan to ask for forgiveness, not permission.”

Resolve and discipline in sticking to a strategy, while testing it along the way, also pay off, Entwistle said.

“I can tell you from personal experience, there is no linear path to success.”

Graduates should also measure their work from a global standard—not just a national context, he added. “By only considering the Canadian context, you’re selling yourselves short and setting your expectations too low.”

Another vital component to success—and possibly the most important—is the human factor, Entwistle said. Inspired by the words of his father, he learned to appreciate the advances technology brings, but equally value the simple emotion of empathy.

“There is no substitute for authentic human compassion.

“Indeed, I believe that in order to do well in business, we must also ‘do good’ in the communities where we live, where we work and where we serve as citizens.”

Telus delivers on that societal commitment through its philosophy of “We give where we live,” which the corporation’s employees and retirees have taken to heart, contributing $350 million to charity and volunteering 4.5 million hours of service across Canada.

Pausing from the business of business to give a helping hand on a human level builds healthier and compassionate communities, Entwistle said.

“By giving selflessly to others, we develop in turn the emotional nourishment and sustenance to answer challenges within our own personal and professional lives.”

He also reminded his audience, even as they become accomplished business leaders, to make room for the people closest to them. “Please do not let ambition stand in the way of spending time with the people you love, your parents, families, friends, mentors and coaches whose encouragement and support have helped make all of your accomplishments possible.

Drawing on the words of playwright George Bernard Shaw—which have hung in the Telus boardroom for 14 years—Entwistle told the new graduates to make their own circumstances, create their own success, “but be even greater human beings.”

Do good to do well, business leader urges grads
Newsroom