(It) is a political and legal high-wire act. The road ahead will be a difficult one.

Do we need more pipelines?

The economics make sense for Alberta, but getting two recently approved pipelines built is far from a sure thing. 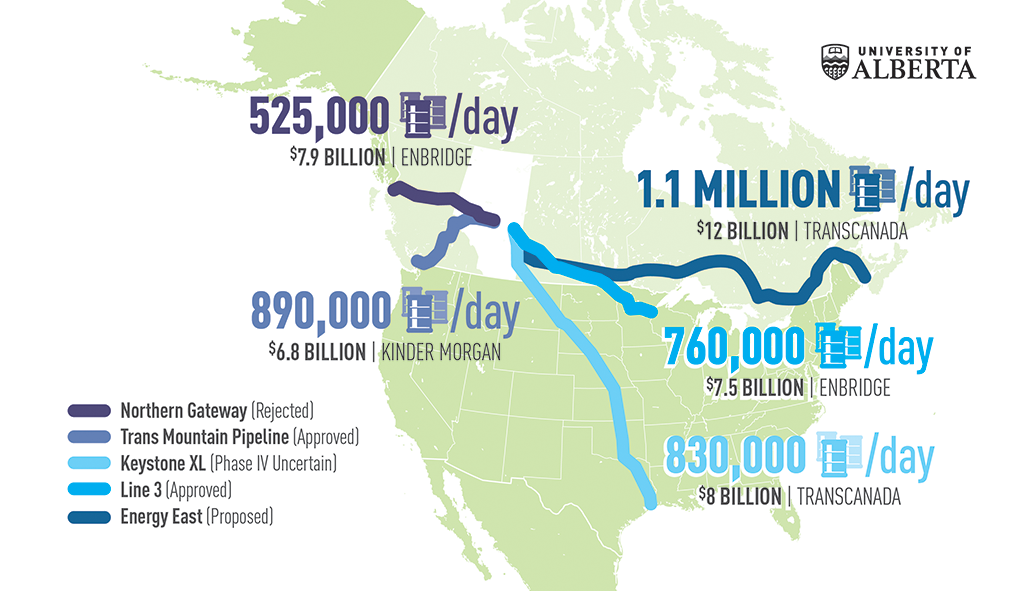 Federal approval of the Trans Mountain and Line 3 pipelines could bode well for Alberta's energy industry—if they ever get built.

If the lengthy debate surrounding the Keystone XL pipeline is any indication, the Kinder Morgan Trans Mountain pipeline expansion and the Enbridge Line 3 project are anything but a done deal despite yesterday’s approval of the two projects by the federal government.

Weighing the wants of industry with the needs of communities and environmental considerations has created a situation where no objection is too unreasonable and no reason to go ahead too obvious.

Setting aside environmental implications and looking at it from a purely business standpoint, the answer is an emphatic yes, Canada needs more pipelines.

With oilsands production set to grow from 2.37 million barrels of oil per day in 2015 to 3.67 million in 2030, and an inability for Canada to consume as much as it produces, Alberta oil needs to find a way to market, or shut down.

And with the cost of just applying to build a pipeline running into the billions, let alone building one, Doucet said it pays for itself.

“No one builds a pipeline without long-term contracts and some level of certainty regarding recouping the investment in the pipeline,” he said.

If the business case is more pipelines, which direction should they go?

“First of all, we want pipelines to either coast because we want to reach markets other than North American markets. We have to take price discounts because we have very little access to global petroleum markets,” said Doucet.

Because Alberta oil is landlocked and Canada is in the midst of a pipeline shortage, the closer the oil is to home, the bigger the discount—and that, according to Carmen Velasquez, executive director of UAlberta energy programs, includes oil sold down the unresolved Keystone XL pipeline.

The embattled line would see Alberta heavy crude make its way to the Texas Gulf Coast refinery to the tune of 830,000 barrels a day.

“Right now, Alberta oil ends up there but not in a meaningful way,” said Velasquez, of the 100,000 or so barrels that meander southward along Keystone’s older phases.

“The Gulf Coast is the natural home for Canadian crude,” said Velasquez. “The potential growth is significant.”

But as Velasquez points out, lack of tidewater access and the bulk of our pipelines flowing south means Canadian producers are price takers, not price setters.

It also means Alberta oil producers are in competition with heavy oil producers from Mexico and Venezuela, two producers that come in cheap but with baggage.

While Mexico is struggling to maintain production, Venezuela has a Faustian dollars-for-oil agreement with China that buoyed a collapsing Venezuelan economy in exchange for a secure oil stream going the other way.

It’s all about price

Of course, security is simply a nice-to-have in the oil refining business. Price is the only real determining factor.

And herein lies the dilemma—why would Alberta continue to fight for ballooned access to the Gulf Coast when lucrative Asia-Pacific markets thirst for oil at a premium?

That’s what Premier Rachel Notley alluded to when asked her thoughts on U.S. president-elect Donald Trump’s assurance that he would sign the Keystone XL pipeline back into existence. She said her focus is getting Canadian pipelines to Canadian tidewater, “where we have the most control that we can.”

That is why the Trans Mountain pipeline—which calls for expanding an existing 1,150-kilometre pipeline linking the Edmonton area and Burnaby, B.C.—is so intriguing.

“If the Trans Mountain came online tomorrow, that pipeline would fill instantly. The value of getting an Asia-based price is significant,” says Carmen Velasquez

Velasquez said the federal government began signalling its support of Kinder Morgan’s pipeline proposal in early November with an announcement of the $1.5-billion Oceans Protection Plan, which included bulked-up resources for responding to fuel spills in Canadian tidewaters.

“Without actually saying anything, the prime minister was saying, ‘This is my way of moving it towards approval,’” she said.

Though there is a cost of getting oil to the coast, moving oil by ship is a fraction of the cost of moving it by pipeline.

“The price you would get in Asia is so much more that it covers the cost of the pipeline and the ship,” said Velasquez. “Put it this way—if the Trans Mountain came online tomorrow, that pipeline would fill instantly. The value of getting an Asia-based price is significant.”

Getting approval from the federal government is one thing; getting a pipeline built is another matter completely.

Earlier this year, the Federal Court of Appeal sided with Indigenous groups who argued meaningful consultation had not taken place in advance of Prime Minister Stephen Harper’s 2014 approval of Enbridge’s Northern Gateway Pipeline, a project that would sink 1,178 kilometres of pipeline from Bruderheim to the northern B.C. port city of Kitimat. That project was shelved for good Nov. 29 by Prime Minister Justin Trudeau, who agreed the line was not in the best interest of affected communities.

Eric Adams, professor in the University of Alberta Faculty of Law, said similar obstacles still stand in the way of the Line 3 and Trans Mountain projects.

“My own view is that the latest Supreme Court of Canada decisions say that where the impacts of industrial projects have a sufficiently negative impact on Aboriginal rights and title, consent may be required from the rights-holding Indigenous communities,” he said.

Does that amount to a veto? It’s complicated.

“Not all pipeline impacts give rise to a duty to only proceed with full consent,” he said. “It is a question of the degree and significance of the impact that determines the process and nature of the government’s consultation with Indigenous peoples.

“However, I think the case law is equally clear that when facing a direct, serious and sustained impact on the lands held under Aboriginal title or on which Aboriginal and treaty rights are enjoyed, consent may well be required.

“In effect, in some circumstances Indigenous communities may have a veto over a particular industrial project.”

Adams said another reason pipelines are tricky is that courts are compelled to forecast and imagine their negative impacts.

“Mechanical and human error lead to pipeline spills—no company can deny it,” he said. “It’s not just the impact of the pipeline being buried underground, it’s the spill that may happen in 50 years.”

He said when Indigenous communities complain about the negative impact on their Aboriginal rights and title, they also have in mind the accidents that no one anticipates but that do, in fact, occur.

“It’s the Exxon Valdez, it’s the pipeline spill in Michigan, it’s the BP disaster in the Gulf,” he said. “If you’re a court evaluating the legality of a pipeline in relation to its impact on Aboriginal rights, how do you calculate the negative impact of something that hasn’t happened yet? It is extremely difficult to calibrate.”

He says pipeline battles both politically and legally are not for the faint of heart.

“Balancing constitutional politics, the honour of the Crown in relation to Indigenous peoples, and the economic benefits generated from the exploitation and trade of these resources is a political and legal high-wire act. The road ahead will be a difficult one.”

NEXT: Can the environment and pipelines co-exist?

Do we need more pipelines?
Newsroom