Does an Aspirin a day really keep the doctor away? 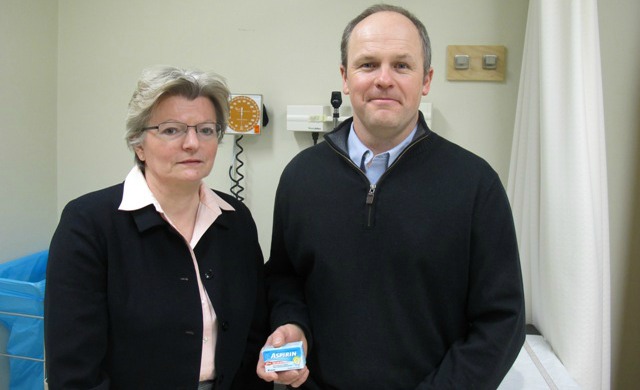 130319-olgaszafran-mikekolber-banner
Olga Szafran and Mike Kolber, researchers with the family medicine department at UAlberta, found that many healthy people over age 50 are taking Aspirin to prevent cardiovascular disease, despite new literature showing it isn’t as beneficial as once thought.

(Edmonton) A new study out of the University of Alberta shows that a large population of healthy people are taking Aspirin to prevent cardiovascular disease, despite new literature showing it isn’t as beneficial as once thought.

Olga Szafran and Mike Kolber, with the Department of Family Medicine in the U of A’s Faculty of Medicine & Dentistry, surveyed patients over the age of 50 at two clinics in Alberta. They found that more than 40 per cent of people who don’t suffer from cardiovascular disease are popping pills daily to prevent a heart attack or stroke—a practice called primary prevention.

“A lot of this comes from many years ago, when they did this study on physicians and it showed that physicians who take Aspirin seem to do better than those who don’t,” said Kolber. “The problem is, physicians aren’t a generalized group of people; physicians are healthier and they’re educated. All the literature that’s been coming out over the last three to five years has said Aspirin for primary prevention really doesn’t change long-term mortality.”

The U of A researchers’ data also showed that 62 per cent of those who have cardiovascular disease are following the same regimen. This is called secondary prevention, and this group really benefits from a daily Aspirin.

The findings are published in the January edition of the journal Canadian Family Physician.

“I think the hope is that this paper will sensitize physicians to their own practice and create a growing awareness of the issue,” said Szafran.

“If we can get it out there and ensure physicians and patients have the discussion, perhaps we could shift the use a little bit,” said Kolber. “Discuss that it’s important, if you have cardiovascular disease, to be taking Aspirin, and probably less important to be taking it if you don’t have an event.”

Does an Aspirin a day really keep the doctor away?
Newsroom