“Fortunately, hockey, like most sports, is heavily spiced with randomness."

Don’t count Oilers out of the playoffs, says mathematician 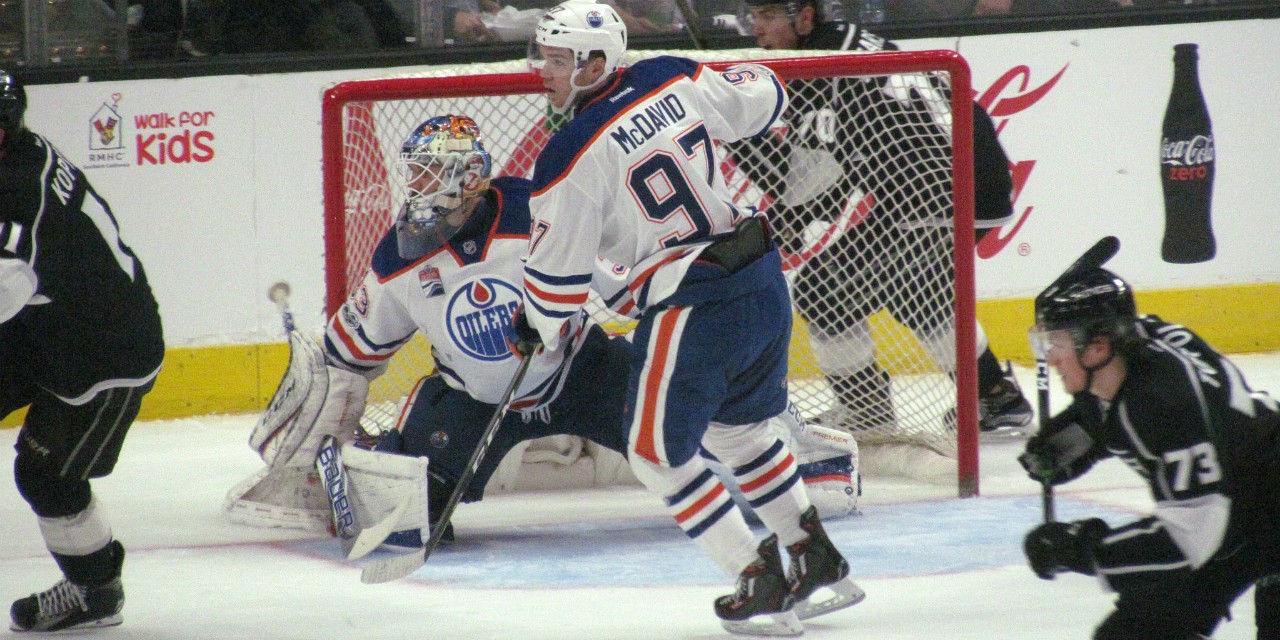 With 50 games left to go in the NHL regular season, the Edmonton Oilers’ chances of making the playoffs are dwindling almost as fast as the number of fans who believe they can do it.

One of those remaining believers is University of Alberta math professor Terry Gannon—and he has the stats to back his faith.

“Fortunately, hockey, like most sports, is heavily spiced with randomness.”

It’s hard to believe the same Oilers team, who were a single goal short of a berth in the Western Conference final last year and were picked by many to win it all this year, are already nine points shy of eighth, with six teams—including perennial Stanley Cup favourites Chicago Blackhawks and Anaheim Ducks—standing between them and the final playoff spot in the West.

Their problems, according to Gannon, are more puzzling than they are catastrophic.

Gannon says the Oilers’ power play—among the most feared in the league a year ago, scoring at a 22.9 per cent clip—is relatively woeful this season, scoring 18.4 per cent of the time with the man advantage, a lacklustre 18th in the league.

And though the Oilers mustered a middling penalty kill in 2016-17, they have failed at an almost historic level so far this season, killing just 72.1 per cent of penalties. For comparison, the record for ineptitude while down a man belongs to the 1979-80 Los Angeles Kings, who survived just 67.7 per cent of short-handed situations.

“The good thing is their poor shooting percentage this year compared to last year is probably just random,” he said. “For instance, McDavid should be better this year than last, but his shooting percentage is down. After that, (top defenceman) Andrej Sekera is expected to return from injury soon, which should help their power play.”

Much more troubling, according to Gannon, is their goalies’ save percentage. He hangs much of last season’s success on the play of Cam Talbot. On a team not known for its solid defensive style, Talbot stopped 91.9 per cent of shots last year and 91.7 per cent the year before, “so it was no accident.”

This year, Talbot’s save percentage is a meagre 90.3 per cent.

“Amongst all goalies who have played at least 1,000 minutes, only four are worse than that,” said Gannon, adding backup goalie Laurent Brossoit isn’t helping matters, stopping just 89.1 per cent of shots he faces, third worst amongst goalies with at least 500 minutes played. “Defence is a team game, so it is unfair to point fingers exclusively at the goalies, but the goaltending has not looked good.”

All of that, and it’s easy to see why number-crunching websites such as Sports Club Stats and Hockey Reference respectively give the Oilers just a 3.4 per cent and 5.8 per cent chance of making the playoffs.

Oddly, though, many of the numbers preferred by statisticians to illustrate team success fall in the Oilers’ favour.

At even strength, Gannon said, the Oilers are a very strong possession team. He points to the Oilers’ Corsi and Fenwick scores—the former being a comparison of shots for and against, and the latter comparing shot attempts for and against—which both peg the team at second best in the league. As well, their percentage of faceoffs in the offensive zone is third best.

“These indicate that the Oilers tend to control play when there isn’t a penalty. They were good last year too, but not this good,” said Gannon. “These numbers are skewed a bit by the fact that the Oilers are often behind, which means teams needing a goal tend to pressure their opponents more and control the play roughly 55 per cent of the time on average.

“But even after taking this into account, the Oilers are above average at controlling the play.”

That leaves Gannon cautiously optimistic, although he explained that even the most complex statistical dives into performance can’t duplicate the predictive powers of the game's most basic math.

“The best simple predictor of whether a team makes the playoffs is not where they stand at Thanksgiving, but how many goals the team scores compared to goals against, over the course of the whole season,” said Gannon. “Basically, if you score more goals than you let in, you will probably make the playoffs.”

So what’s the prognosis?

“A safe bet is that they will start scoring at a higher pace,” said Gannon. “And if their goaltending was merely average over the first 32 games, the Oilers would have something like 13 fewer goals against, and they would be in the playoff conversation.”

As proof of his playoff concept, Gannon pointed to the 2014-15 Ottawa Senators, who were 14 points out of the playoffs on Feb. 10 before reeling off a record of 23-4-4 in their last 31 games to sneak in. And the Oilers don’t even need that sort of miracle, he added.

“There are 50 games left. Their scoring should improve and their goaltending is capable of much more,” he said, pointing to the 2015-16 Pittsburgh Penguins as a more relatable comparison.

“After their 32nd game in mid-December of 2015, the Penguins were hovering in the middle of the pack, in and out of the playoffs. Over the rest of the season they worked at becoming a faster and more balanced team—surely a good template for Edmonton—and finished the season second in the East. And won the Stanley Cup.”

Don’t count Oilers out of the playoffs, says mathematician