Dr. Kickstarter: How the crowd can push research into application 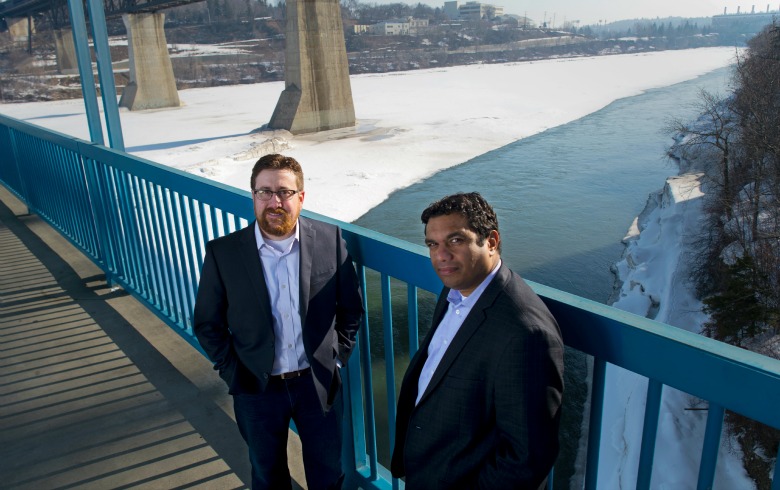 (Edmonton) University of Alberta chemistry professor Michael Serpe has no problem saying he’s trying to solve the world’s problems. He also has no problem turning a jar of stinky white powder (a nearly unpronounceable polymer) into a biosensor that could change colours under the influence of disease markers or environmental toxins—a potential solution that may be able to predict diseases and track contaminants within two years. That’s the easy part.

The hard part, he says, is connecting his discovery research with the people who can bring it to market.

“I really think it’s a universal problem,” says the leader of the Serpe Research Group at the U of A, which is focused on polymer application. “We don’t know what the industry needs or wants, and vice versa—industry doesn’t know of our capabilities and what we’re willing to collaborate on.”

Even though he was one of 15 applicants to win $100,000 from Grand Challenges Canada—a competition hoping to send first-place ideas to third-world countries—Serpe views this disconnect as his real grand challenge.

Enter Reg Joseph, a young professional with loads of experience working for the NASDAQ-traded corporation Life Technologies (formerly InvitroGen). There, his job was to lead academics to the invisible hand. Now the CEO of U of A biotech offshoot Metabolomic Technologies, Joseph met Serpe through a “blind date” set up by a colleague.

“There was no angle other than he’s finding cool stuff—and you should talk because you know about business and commercialization,” recalls Joseph.

The connection was a sort of discovery research in itself, and the direct translation has been to create a network of industry and academic people who might connect like the antigens and antibodies in Serpe’s polymers.

Last August, they hosted a mini-conference on diagnostic innovation at the university. “I wanted everybody together,” says Serpe, “the people who hold the purse strings, the people who need the technology and the people who develop it. The grand goal was to find ways that we can collaborate and get money from our governments to collaborate on research to solve big problems.” He pauses. “We didn’t get there.”

Though it hasn’t yet yielded the success he hopes for, he’s confident he’ll get there—and is kicking around some other ideas in the meantime.

Trying to avoid grant systems that reward only the boldest application promises and force researchers to make their proposals “sexy” for funding, Serpe wonders whether the future might lie in micro-funding systems similar to those artists use to crowdsource money, like Kickstarter.

But until then, he’s found that going to business events—“even those that seemed out of place”—has been most fruitful. He already has a few interested partners from separate fields that see possibilities in his polymers that he never could.

Dr. Kickstarter: How the crowd can push research into application
Newsroom