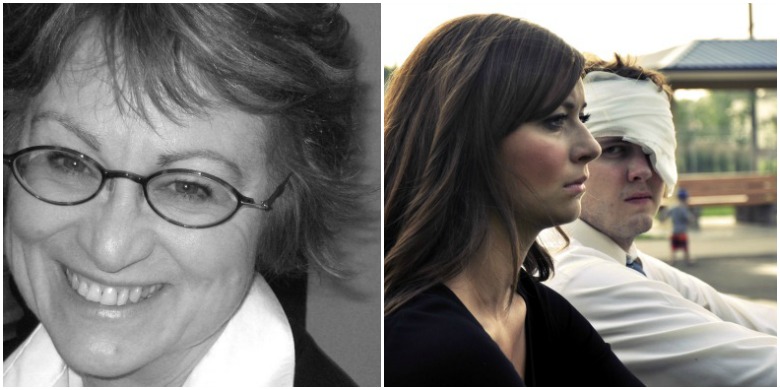 120817-nicholls-banner02
(from left) U of A drama professor Sandra Nicholls; Merran Carr-Wiggin as Kayleen and Evan Hall as Doug in the Fringe Festival production of "Gruesome Playground Injuries."

(Edmonton) There is a place in the relationship between mentor and student, if left to fulfil its potential, where these two points on the learning continuum touch and create collaboration.

The result of that student-teacher ideal, which happens daily in the obscurity of labs across the University of Alberta campus, will be on display for all to see when the Edmonton Fringe Festival plays host to Gruesome Playground Injuries, directed by University of Alberta drama professor Sandra Nicholls, and featuring both current and former students of hers.

“What sets Sandy apart to work with at this point is that she is no longer our teacher—she is our collaborator, partner and teammate in this production,” said Evan Hall, a recent graduate of the bachelor of fine arts in acting program who stars in the play as Doug. “It shows her faith in her students, and in the BFA acting program, as well as this show.”

By her own admission, Nicholls is first and foremost an actor. This allows the new co-ordinator of the BFA acting program the luxury of calling on close to five decades of front-line experience, but working as one actor to another.

“To continue to launch students into the profession any way I can is my central goal and task,” said Nicholls.

This particular launching pad, Gruesome Playground Injuries by Pulitzer Prize finalist Rajiv Joseph, follows the complicated relationship of star-crossed friends Doug and Kayleen over 30 years, as they are brought together by calamities and painful events, both physical and emotional. The play explores how injuries can mark personal relationships, how hearts are hurt and healed, and to what extent one person can truly heal another.

What needs no exploration, according to fourth-year drama student Merran Carr-Wiggin, is the impact a dedicated, thoughtful teacher can have on students' lives.

“She truly makes you feel lucky to work with her and I am honoured because I believe she wouldn't embark on a project unless she truly believed in it,” said Carr-Wiggin, who stars as Kayleen. “And luckily, she believed in us.”

“To have the honour of working with talented young artists and the extremely gifted and committed faculty in the drama department makes every day my lucky day,” said Nicholls.

Gruesome Playground Injuries will have its Edmonton premiere at the Edmonton International Fringe Theatre Festival, beginning at noon Aug. 18 at the TELUS Building (Old Telephone Museum), followed by daily performances Aug. 19, 20, 23, 25 and 26. More details are available at the Fringe website.