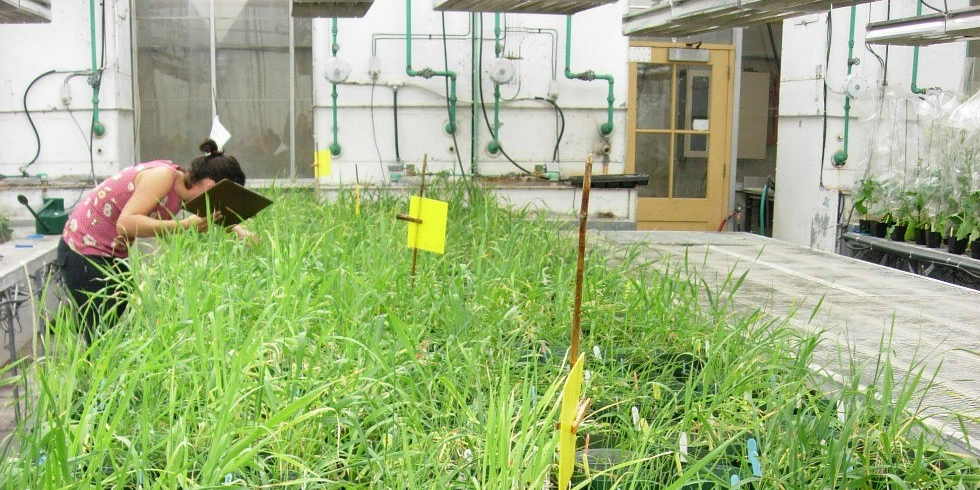 Research assistant Helene Marcoux monitors the growth of plants in drywall compost mixes. Drywall was found to be a good compost additive for reclaimed land sites because it is decomposable and full of nutrients.

(Edmonton) It’s not out of a zombie film but it’s close: used drywall can help bring dead soils back to life, according to a new University of Alberta study.

M. Anne Naeth, a researcher with the Department of Renewable Resources, and her team wondered whether drywall, with its decomposable materials chock-full of nutrients, would be a good compost additive for use on reclaimed land sites.

The team found that applying drywall compost had the same effects as other typical composts, with higher plant yields. Drywall biosolids compost applied at an appropriate rate resulted in greater plant biomass than biosolids compost without drywall. The researchers speculate that this was due to increased soil nitrogen.

“Often what you have with large-scale and industry-oriented reclamation projects is a soil material that’s very poor. It’s hard, it’s not very porous, it doesn’t have nutrients and it lacks organic matter, so it’s really hard for plants to grow in it,” Naeth said.

Though it hardly resembles materials found in your average compost, like lawn clippings or eggshells, unpainted waste drywall doesn’t have any risks associated with its use if added to household or municipal solid waste composts, while biosolids compost can contain high levels of metals, Naeth noted.

Naeth and her team also found that grinding drywall did not produce significantly greater results than simply using coarse chunks.

However, the most significant takeaway from the research, Naeth said, is the importance of repurposing materials that would normally be thrown out.

“What excites me about any of this kind of work is just being able to take material that would normally be dumped into the landfills, and rather than taking up bigger land to make a bigger landfill, we can use some of that material to go back into the land,” she said.

Thanks to this research, the city will likely start using drywall in its municipal compost.