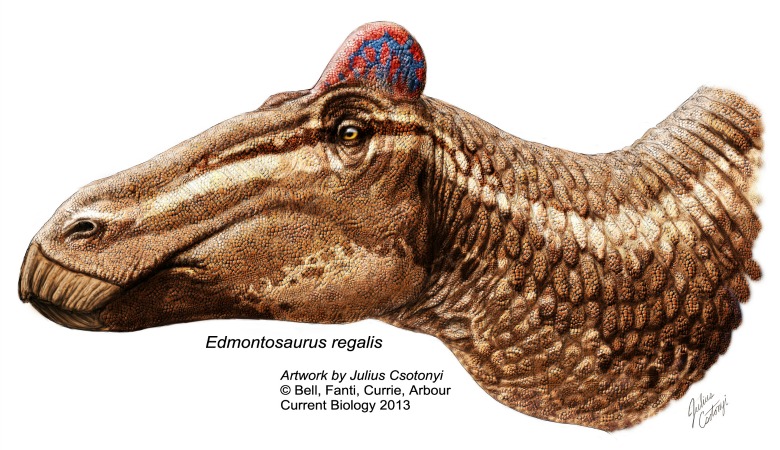 (Edmonton) University of Alberta scientists have unearthed an exceptionally well-preserved fossil that yields new clues about the appearance and behaviour of duck-billed dinosaurs.

Victoria Arbour, a PhD candidate in the Faculty of Science who is working under the supervision of renowned U of A paleontologist Philip Currie, helped with analyzing CT scans of the fossil.

“It really highlights how many surprises there can be in the fossil record when we get soft tissues preserved,” says Arbour. “Usually we only get the hard parts, like skeletons or shells, but animals can look really different on the outside as opposed to the skeleton.”

The fossilized Edmontosaurus is believed to be 72 million years old, from the late Cretaceous period. Edmontosaurus is a species of hadrosaur—plant-eating, duck-billed dinosaurs that grew up to 12 metres long.

Up until now, paleontologists had only speculated about the existence of soft-tissue head crests, because such tissue usually decays rapidly after the dinosaur’s death, rarely fossilizing. The skin impressions on the dino skull were found by U of A alumnus Phil Bell, now a paleontologist at the University of New England in Armidale, Australia.

“It’s the equivalent to discovering for the first time that elephants had trunks,” said Bell. “We have lots of skulls of Edmontosaurus, but there are no clues on them that suggest they might have had a big, fleshy crest.”

The research team believes the bizarre-looking comb could have played a role in the mating habits of Edmontosaurus, likening them to the bright-red combs found on roosters. They hypothesize that it’s possible male dinosaurs sized each other up, bellowing and showing off their head gear to attract mates and gain dominance of the herd.

The discovery could also point to the existence of soft-flesh features in other species of dinosaur, including T. rex or Triceratops.

“There may be soft tissue structures in other dinosaurs that we also don’t expect—not necessarily a fleshy comb, but all the weird little squishy bits and bobs you find on modern animals like turkeys or roosters,” says Arbour.

Another star specimen for U of A collection

The rare specimen has been added to the U of A’s Laboratory for Vertebrate Paleontology, a collection that includes more than 50,000 specimens ranging in age from 450 million to 10,000 years old. The fossil will be the subject of further studies by researchers and students hoping to understand the behaviour and appearance of dinosaurs.

“It’s a specimen we’re all really proud to have found and have here at the U of A, and I certainly plan to show it off to my students,” says Arbour. “What it really does is fire up the imagination, and it’s a good reminder of how much we don’t know and how many new questions there are to ask out there.”

Details of the research team’s findings were published in the journal Current Biology.