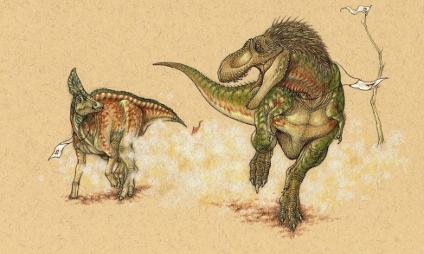 The T. Rex gets off to a quicker start than the hadrosaur, thanks to its longer legs and muscles built for long, fast strides. 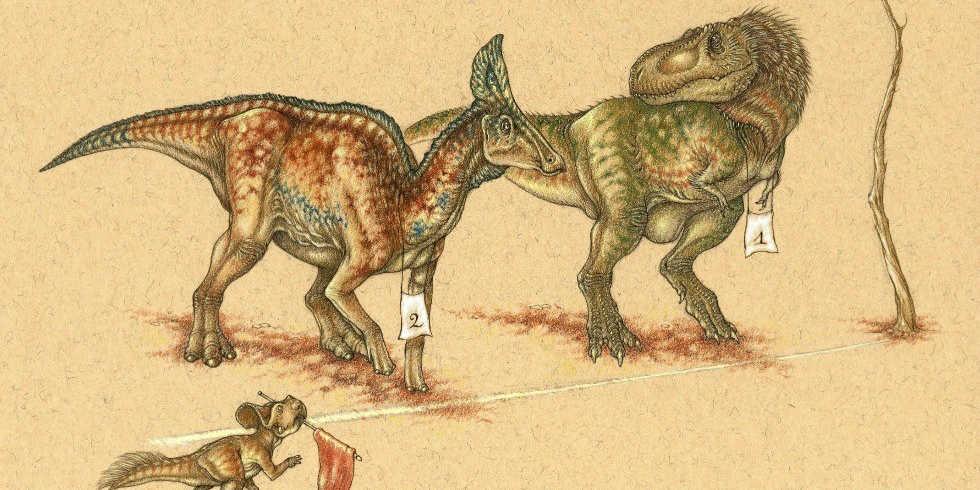 Could the humble hadrosaur outrun the mighty T. Rex in an endurance race? UAlberta paleontologists think so, based on their new study of the dinosaurs' bone and muscle structure. (Illustrations: Niroot Puttapipat)

(Edmonton) If you ever find yourself wandering lost in Jurassic Park or time-warped back 70 million years, University of Alberta paleontologists Scott Persons and Phil Currie are two guys you would want with you. The two scientists have just published a new paper on tyrannosaur avoidance strategies, looking into how other dinosaurs coexisted with the colossal carnivores and offering new insight into a prehistoric mystery of survival.

“When it comes to avoiding predators, big animals have it hard,” says lead author Scott Persons, a graduate student in the Department of Biological Sciences. “When trouble comes, tiny creatures can hide in the bushes, run up a tree or escape inside a burrow, but an animal the size of a big herbivorous dinosaur couldn’t exactly conceal itself behind the nearest shrub or beneath a convenient rock or tree root.”

Instead, most families of plant-eating dinosaurs evolved specific adaptations to help them cope with their meat-eating adversaries. Some, like Triceratops, evolved big horns that made them too dangerous to attack. Others evolved bony suits of spiky armour that turned them into walking fortresses. A few others evolved lightweight bodies and extra-long legs that gave them the speed to reliably outrun predators. But one group has always appeared virtually defenceless: the hadrosaurs—better known as the duck-billed dinosaurs.

“Hadrosaurs have no horns, no tusks, no big claws and no armour,” says Persons. “They were social animals and lived in large herds. But safety in numbers only goes so far, and to a T. Rex, a big herd of unarmed hadrosaurs would seem like a buffet.”

And yet, hadrosaurs did not simply survive alongside tyrannosaurs—they thrived. In the badlands of Alberta and in many other dinosaur fossil beds across North America and Asia, hadrosaur bones outnumber all other large dinosaur fossils combined. What were they doing right?

“If duck-bills couldn’t hide and couldn’t fight, maybe they could run,” Persons explains. “Compared with other herbivorous heavyweights, hadrosaurs do have proportionately longer leg bones, which indicates faster running. But hadrosaur limb proportions still seem downright poky when you compare them to tyrannosaurs.”

A breakthrough came when Persons looked beyond the bones and considered muscles. Using digital modelling techniques and muscle insertion clues from skeletons, Persons was able to estimate the size and shape of the primary leg muscles of hadrosaurs and tyrannosaurs. He found that both groups had adaptations to support a supersized set of running muscles.

“Their primary running muscle is called the caudofemoralis, and it’s positioned at the base of the tail,” Persons says. “Both hadrosaurs and their predators had an expanded caudofemoralis, but there was a critical difference: in hadrosaurs the muscle was expanded downwards, whereas in tyrannosaurs it was expanded upwards. The upward-expanded muscles attached high on the thigh; the downward-expanded muscles attached low. These up versus down expansions were not just two equally good solutions to the same problem. They imparted two very different running abilities.”

“Imagine we go to the Dino Derby,” Persons muses. “In a race between a tyrannosaur and a hadrosaur, it used to be that the smart money was all on the tyrannosaur. Well, bang! The race begins and, sure enough, with longer legs the tyrannosaur bursts out of the starting gate and into an early lead. With a high attachment, it only takes a short, quick contraction of the caudofemoralis muscle to pull the leg through a single long stride. The low attachment of the hadrosaur only permits shorter, slower strides. The tyrannosaur leaves the duck-bill in its dust. But . . . suppose the race isn’t just a quick sprint. Suppose it’s a full lap or two around the track. Although the tyrannosaur has a higher top speed, it cannot keep up the pace. The low attachment of the hadrosaur’s caudofemoralis gives the muscle great leverage. That translates into much better endurance. It’s like a prehistoric version of Aesop’s fable: the slow but steady hadrosaur wins the race.” 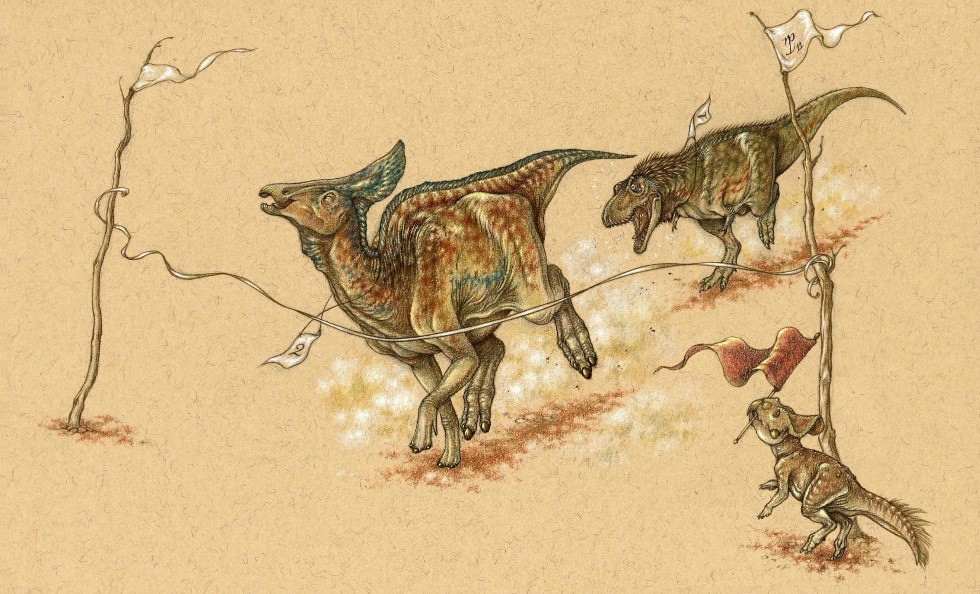 The hadrosaur crosses the finish line first, using its greater muscle leverage to beat the T. Rex over longer distances.

How did superior endurance running keep hadrosaurs from becoming easy pickings for faster tyrannosaurs? Here the U of A researchers draw a comparison with modern zebras. Like hadrosaurs, zebras are often the most abundant big herbivores in their environments, despite having no horns or armour. And although zebras are fast, their top speed is well below that of the lions and cheetahs that prey on them.

“But big cats have terrible endurance and tire out quickly,” Persons concludes. “Zebras can avoid being caught if they start to run before the cats can sneak into their very short effective striking distance. An alert herd can help with that. I think endurance running could have been an even better predator avoidance strategy for hadrosaurs. After all, the limitations of big size work both ways. Zebras have to be on the lookout for stealthy cats lurking in tall grass, but hadrosaurs had only to spot predators that were the size of billboards.”

Persons’ and Currie’s research in the Faculty of Science was published this week in a special compendium of research papers on hadrosaurs produced by Indiana University Press.