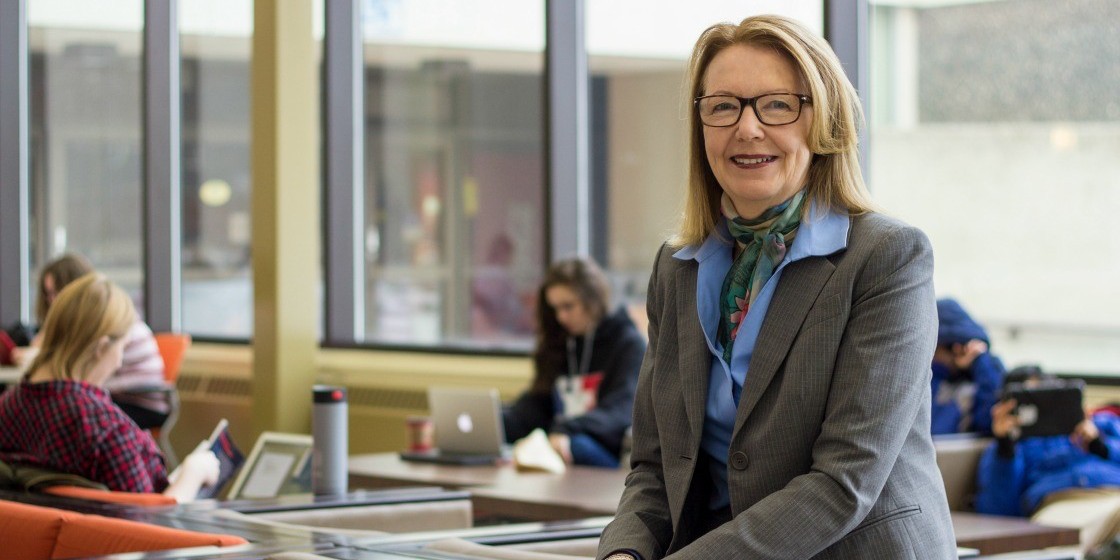 Fern Snart, outgoing dean of the Faculty of Education

(Edmonton) Fern Snart is not one to slow down. As she nears the end of her final term as dean of the University of Alberta’s Faculty of Education, her schedule is busier now than it was the day she started her deanship in 2005.

There are delegations of visiting scholars to host, faculty meetings to chair, awards to present, projects to wrap up—and the small matter of a photo shoot to do for the faculty magazine.

Although she prefers not to be the centre of attention, Snart is game for anything. She tells the photographer she’s happy to pose anywhere, but what she really wants to do is pull other people into the photos and make it fun for everyone.

Striding past the cafeteria in the Education North building, she stops to say hello to two women who work there and have known her for years. “Our favourite lady!” one of the women exclaims, as Snart wraps her arms around them warmly and asks them to kick up their legs, Rockettes-style, for a candid photo.

A champion for change

Snart’s emotions are mixed as she contemplates stepping down as dean after 11 years and taking up new adventures following a career at the U of A that has spanned more than 30 years.

Reflecting on her career, Snart says her focus has always been on access and inclusivity in education—and her colleagues can attest to the impact she has made.

“I think that what’s happened is our recognition of the broad range of difference among students coming into classrooms. So this notion of recognizing difference and taking it into consideration in such things as curriculum and teacher pedagogy is critically important. Fern has really influenced that agenda in teacher education,” says Blye Frank, dean of education at the University of British Columbia and president of the Association of Canadian Deans of Education.

Evelyn Steinhauer, a colleague and director of the faculty’s Aboriginal Teacher Education Program (ATEP), has witnessed the changes made under Snart’s leadership firsthand. The two worked together on ATEP, an off-campus collaborative degree program that allows aspiring teachers to obtain a bachelor of education degree with a specialization in elementary education while remaining in their communities.

“She had the vision, and she heard what communities were saying. They were saying they wanted a bachelor of education degree program in their communities; they wanted their own community members to become teachers,” says Steinhauer.

Steinhauer grew up in Saddle Lake Cree Nation, where any dreams of higher education were quickly discouraged. But, she says, programs such as ATEP are giving people a chance to pursue what she finally achieved—graduating with a PhD. “If we didn’t have a leader who saw how important Aboriginal education was, it just wouldn’t happen,” says Steinhauer of Snart’s involvement.

During her time as dean, Snart increased the number of Aboriginal colleagues in her faculty from one to eight across different departments. She served as president of the Association of Canadian Deans of Education between 2009 and 2010; during that time, the association finalized a national accord on indigenous education that laid out principles and guidelines for Aboriginal education in Canada.

“If you only have negative stereotypes and experiences with racism, that becomes the talk that’s in your head. It’s incredibly important to have people like Dr. Snart, supporting and believing in our students,” says Steinhauer.

Being a strategic thinker and an academic with decades of experience in special education and integration of students with special needs, Snart understands that to create safe and inclusive classrooms free of racism and discrimination, educators need to look at how future teachers are being educated and prepared for the realities of a 21st-century classroom.

Over the past few years, Snart supported the creation of EDU 211: Aboriginal Education and the Context for Professional Engagement, an undergraduate course that is now mandatory in the Faculty of Education’s curriculum. The class gives future teachers the knowledge of Aboriginal Peoples’ histories and educational experiences to help them become more effective teachers of both Aboriginal and non-Aboriginal children.

In 2013, the team of professors and graduate students who led the seminars for EDU 211 were honoured with University of Alberta Human Rights Education Recognition Teaching Awards.

Along with Aboriginal issues, Snart has been deeply involved in initiatives related to LGBTQ issues. About 10 years ago, she was one of the leaders helping to ensure that the Institute for Sexual Minority Studies and Services (iSMSS) was established on campus.

Today, iSMSS leads groundbreaking research that affects policy development, intervention, education, and community outreach for sexual and gender minorities, nationally and globally. The first U of A Pride Week, founded by iSMSS in partnership with OUTreach, was held in 2013 and has become an annual event. Snart is an enthusiastic supporter, never missing a Pride Parade on campus. She remains fully engaged in supporting the work of iSMSS, including Camp fYrefly, a summer leadership retreat for sexual and gender minority youth, and fYrefly in Schools.

The Fern Snart Scholarship in Education

For information on supporting this award, please contact Sean Mowat, director of advancement in the Faculty of Education, at 780-492-8863 or smowat@ualberta.ca.

During her time as dean, Snart has encouraged and supported a broader global footprint for the faculty in meaningful ways. At the start of her deanship, she created a position for an associate dean (international), and the International Office was formed to help co-ordinate and facilitate international opportunities for education students and faculty members.

Students now have opportunities to go abroad for field experiences, internships and courses in Macao, Beijing, Bermuda, and Norway, and researchers are working collaboratively in over 40 countries worldwide.

At the entrance to the H.T. Coutts Education and Physical Education Library, there is a quote from the dean herself, rendered in gold letters on a wall painted in the U of A’s signature green. It reads: “The work of a Faculty of Education has a direct bearing on society and its future. We recognize that education programs must be transformative in nature promoting critical thinking, creativity, curiosity, and caring.”

For Snart, her work has been about more than just statistics—more than just increasing the number of Aboriginal teachers in the province, the number of undergraduate students in a program or the amount of funding for an initiative. She was—and continues to be—motivated by a desire to improve the quality of education, and the quality of people’s lives through education.