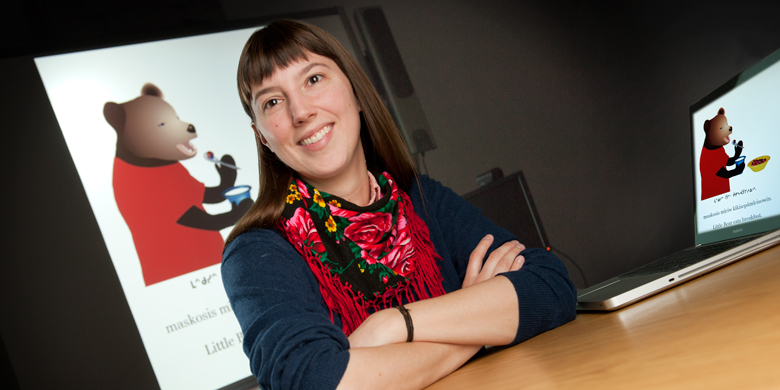 (Edmonton) During her Cree language classes at the University of Alberta, Caylie Gnyra had to translate sentences posted by her instructor, Dorothy Thunder.

Struck by the whimsy of one of the lines, Gnyra, who graduated in 2010 from the U of A Faculty of Native Studies, adopted it for a class project that has since turned into an online tool for Cree language teachers across Alberta.

What Colour Are Your Little Ducks?/Tân’sesinâkosiwak kisîsîpimisiwâwak became the title of an electronic book that Gnyra created for a class project, and that has inspired more e-books that have just gone online free of charge at www.littlecreebooks.com

With some funding through the Social Sciences and Humanities Research Council of Canada via the Faculty of Native Studies, Gnyra designed the cheery, colourful book to introduce young learners to a string of characters and their rainbow-hued pet ducks.

The book has Plains Cree text written in Standard Roman Orthography—the letters used when writing in English—and syllabics, as well as their English translations.

Gnyra wanted to develop material that could be used for little cost in Cree classrooms throughout the province, viewed on SMART boards for group reading, printed off for individual use, or even viewed on tablets and smartphones at home.

She has since created two more such books: one about the seasons, written for a Grade 1 reading level, and one about the daily activities of a young bear, for kindergarten children. Both are designed to mesh with the province’s established Cree language education curriculum. Gnyra hopes that instructors of other Algonquian languages will adapt the books to reflect the grammar and vocabulary of those languages, which are closely related to Cree.

Though she is not Aboriginal and is still learning to speak and write Cree herself, Gnyra is enchanted by the cultural nuances of the language and feels deeply committed to helping preserve it.

“Cree is a very pretty language to the ear and it has a lot of humorous or thought-provoking aspects. Learning it helps me recognize how culture really is embedded in all languages, including English.”

A self-described introvert, Gnyra also appreciates the many ways that Cree culture values and facilitates introspection. “North American culture tends to promote and validate extroversion, so I think one of the reasons I am so interested in spending time learning about Cree culture and language is that I feel like that very integral part of me is valued.”

Her dedication to exploring Cree language and culture was kindled by an interest in social justice.

“While many Canadians are concerned about inequality, injustice and related social issues in other countries, a lot of us just don’t know the details of the difficult history we share with our indigenous neighbours or we don’t quite know where to start in terms of improving Aboriginal and non-Aboriginal relations,” she said.

After earning a degree in English from The King’s University College, Gnyra worked with various Aboriginal communities and organizations through a provincial leadership program, with the Native Cultural Arts Museum in northern Alberta and with indigenous youth in South America.

“I learned a lot about my own position and assumptions, as well as about relations between Aboriginal and non-Aboriginal people, and I wanted to gain more historic context for what I had seen and experienced and heard people talk about.”

Gnyra enrolled in the U of A’s two-year after-degree program in Native Studies, then postponed her graduation for a year to participate in a student internship at the Smithsonian’s National Museum of the American Indian in Washington, D.C., and take a third year of Cree language classes at the U of A.

After graduating, Gnyra went on to take a master’s degree in museum studies in Toronto, where she did some work for the newly established Canadian Language Museum. In keeping with her advocacy for the Cree language, she asked for and received permission to prepare a related exhibit, which she hopes will be ready for 2015, after she consults with Cree elders, speakers and learners.

“An exhibit like this provides an opportunity to share some of the fascinating, humorous and unique aspects of this language. I hope it encourages people to take an interest in learning the language, whether it is their heritage language or not, and ultimately support greater understanding between Aboriginal and non-Aboriginal people.”

Meanwhile, Gnyra hopes to add at least five more e-books to the lineup of her Cree readers, one each for grades 2 through 6. She envisions the Little Cree Books site as a resource dedicated to the unique grammatical rules that make sense when learning Cree.

She also hopes to attract Cree and non-Cree contributors to the project who can share their ideas, artwork and writing.

As she moves forward, Gnyra is grateful for her time at the U of A.

“More than anywhere else I’ve studied, my Native Studies degree and my elective classes in other faculties at the U of A fostered a love of learning for me. It has boosted my self-esteem and well-being to find something that I felt I could really invest in, and just run with it, with the support of my faculty.”