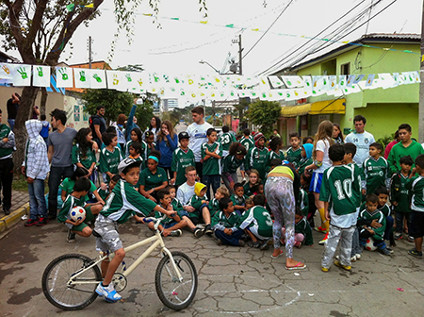 Kids in a Brazilian favela wear their donated green jerseys. 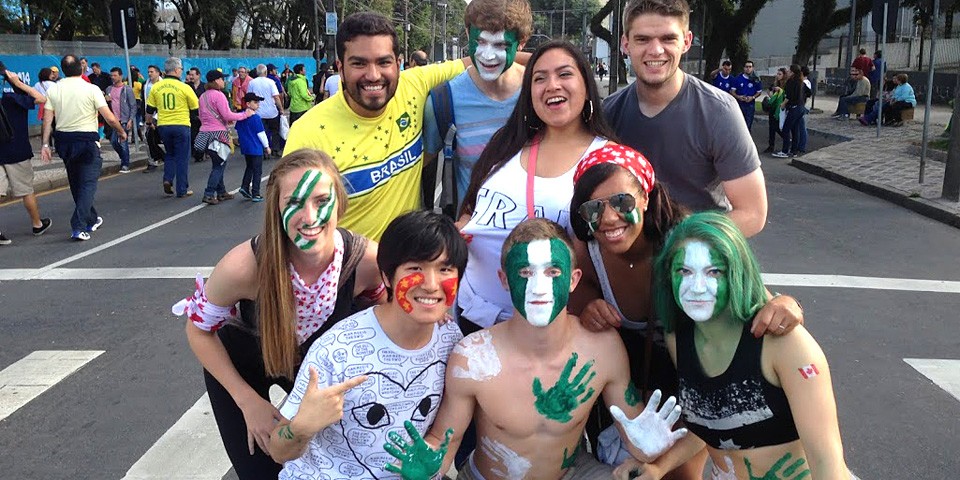 University of Alberta students are pumped to watch a live World Cup game as part of the e3 study abroad program, which blends language, academic studies and real-life experience. (Photo by Danno Dong)

(Edmonton) The streets in Curitiba, Brazil, were eerily quiet. The cheers, singing and sea of gold and green Brazilian soccer jerseys that are normally part of the spectacle following a World Cup match featuring the host nation were instead replaced with silent heartbreak thanks to a 7-1 drubbing at the hands of Germany.

Brazil’s World Cup death spiral was an astonishing thing to witness for Cristina Robles and her fellow University of Alberta students participating in the e3 Education Abroad program. Initially, hopes and spirits were high in the local restaurant where they gathered to watch the game—exuberance that was only temporarily interrupted whenever the establishment’s TV went on the fritz.

“By the end of the second half, whenever the TV would go out people would cheer, saying ‘Put us out of our misery!’ They also clapped whenever Germany would score,” said Robles, a fourth-year marketing student at the U of A. “They just kind of gave up.”

Witnessing the Brazilian passion for soccer was part of a once-in-a-lifetime opportunity through e3 Brazil, which gives students three experiences in one setting and exposes them to language, academics and real-life work experience.

Launched last year with an initial offering in Berlin, e3 gives students the flexibility to choose their courses and schedule to match their interests, with support and guidance from the university, said Britta Baron, vice-provost and associate vice-president (international). It’s that support and flexibility that sets e3 apart, she said.

“We really think we owe our students intensive monitoring and support,” said Baron, noting the program connects students with internships, support in emergency situations and guidance on how to spend their time. “At the end of last year students were super happy. That is what we want to see, that students see this as as fantastic opportunity, that it was a good investment.”

Brazil was added as an e3 destination this year because it is gaining in importance as a partner country and it’s an appealing destination, said Baron. The fact the nation was hosting the World Cup was another bonus.

One of the courses of study focused on soccer and the psychological, social and historical aspects of development in the sport. Nick Holt, a professor in the Faculty of Physical Education and Recreation, said he used soccer and the World Cup as a lens to look at other issues such as how young players in Brazil are treated as commodities, and the social unrest and controversy over the US$11.3-billion cost of hosting the tournament.

“Soccer being a global sport, it brings a whole host of social issues together,” says Holt, whose class featured guest speakers from local universities, a site visit to one of the largest clubs in Brazil and watching a World Cup game live.

Holt says it’s the children from the poorest parts of the country who play soccer, which is watched by the ticket-paying middle class. Scouts from club teams scour the country’s slums, called favelas, looking for talent as young as 11 years old.

“I think the students were concerned that the kids might put everything on soccer and if it doesn’t work out they have nothing to fall back on—and I mean nothing,” Holt said. “They have no education.”

Holt and his students visited a favela outside Curitiba, where they brought more than 300 soccer jerseys, 150 balls and 20 pairs of shoes—gathered through donations in Edmonton—and gave them to local children, who live in some of the worst poverty imaginable, Holt says. Through a partnership with local charity Cheer for Peace, they held a celebration for about 150 children with food, music and a pickup game of soccer.

“Playing soccer for a day isn’t going to change lives, but if nothing else, we gave the kids a good day and a full stomach,” says Holt, who blogged about the experience—which was also a course requirement for the students.

Attending a World Cup game was “pretty amazing,” despite the score—a 0-0 draw between Nigeria and Iran—said Robles. “I never thought I’d get to see a FIFA World Cup game live.”

Robles, who is a few days into a one-month internship at a Brazilian advertising agency, said one of the highlights of the experience was the friendships gained with her fellow students, who have become a tight-knit group and often jointly planned side trips between class modules. Though the program does come with a cost, it’s absolutely worth it, she added.

“You do have a lot of opportunities that you wouldn’t have if you were just travelling. You get to see and experience everything you’re learning. It’s a pretty unique experience.”