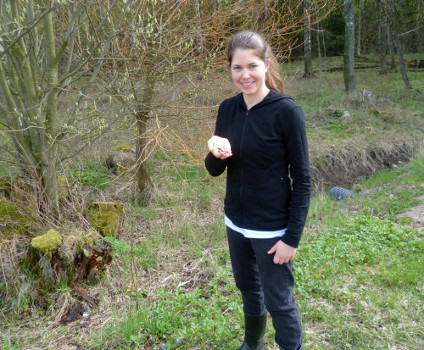 Researcher Erin Cameron in the field. 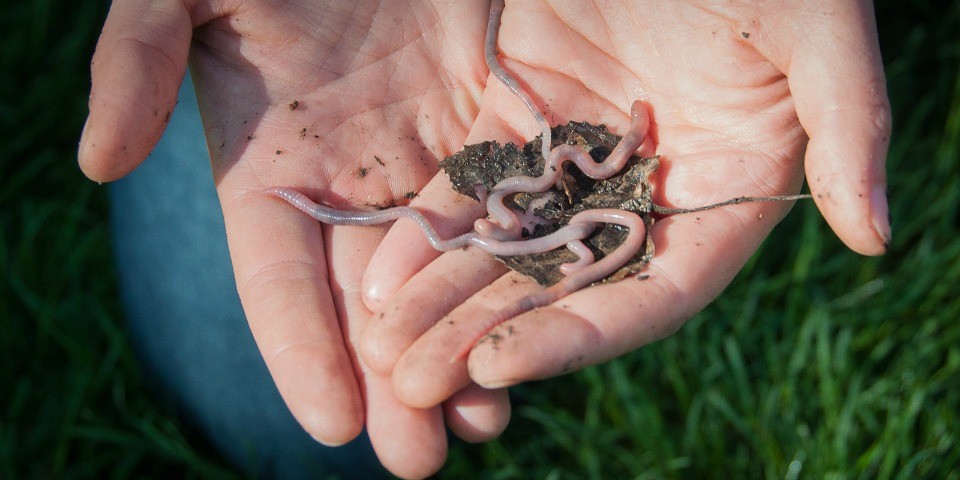 The seemingly harmless earthworm is turning out to be a handful for Alberta's boreal forests.

(Edmonton) Interloping earthworms are wiggling and nibbling their way through northern soils, wreaking havoc on local ecosystems. It’s an invasion that can be slowed only with help from citizen scientists and other outdoor adventurers, says a team from the University of Alberta.

Worms might go unseen by most, but these creepy crawlers present a slick opportunity to learn about the impact of non-native species in Canada’s northern forests, says Erin Cameron. The U of A alumna and former Vanier Scholar says people—mostly fishing and boating enthusiasts and campers—have introduced worms to northern soils, where they have the potential to do considerable damage.

“In agriculture and gardens, worms are obviously quite useful because they mix up the soil and increase aeration, but in forests in most of Canada and the northern United States, they’re an invasive species,” says Cameron, who received her bachelor’s, master’s and PhD from the U of A’s Faculty of Science and is now a post-doctoral fellow at the University of Helsinki. “When they consume the forest leaf litter layer and mix it with the lower mineral soil, that can have negative effects on native species that rely on a thick forest floor.”

Spread of an invasive species

Earthworms were mostly wiped out during the last ice age some 11,000 years ago and were only reintroduced to North America during European settlement. Canada’s only native species are found in areas that were untouched by glaciers, such as Vancouver Island.

Cameron says the earthworm’s move northward is largely the result of human interference and activities such as fishing, boating and camping. Earthworms that don’t end up on a fishing hook often end up discarded in the wilderness or in the water. Worms and worm cocoons also hitchhike their way into the wild, sticking to tire treads or wheel wells before ending up in the forest. From there, they can spread five to 10 metres a year on their own—a journey that can be hastened by a trip down a river or stream.

Scientists first documented the presence of earthworms in Alberta’s foothills in the 1980s. It’s believed worm invasions into the boreal forest happened much more recently, although it is not known when.

Today, at least 14 non-native species of earthworm have been found in Alberta. It’s an area of study Cameron first undertook at the suggestion of her graduate supervisor, Erin Bayne.

“I fell off a log one day and knocked it over and went, ‘Hey, there are earthworms underneath. I’ve never seen that before.’ I started thinking about it and why might that be,” said Bayne, an associate professor in the Department of Biological Sciences.

Looking deeper, the researchers found earthworms were showing up in places they didn’t belong, particularly the northern United States where most research has been focused. In Minnesota, worms have had an appetite for destruction, speeding the breakdown of organic material and changing forests. 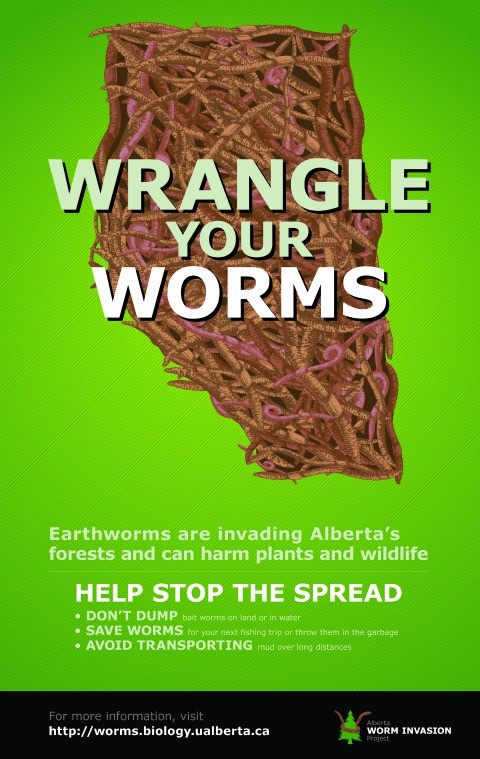 Help stop the invasion Don’t dump bait worms on land or in water. Save worms for your next fishing trip or throw them in the trash. Avoid transporting mud over long distances. Wash your tires.

The situation in Alberta is similar, but not quite the same—a puzzle Cameron and Bayne have been working to unravel for the past eight years through the Alberta Worm Invasion Project.

During that time, they’ve gathered data about earthworms at upward of 20 lakes, dozens of boat launches and about 100 roads across the province. They’ve also attended boat and fishing shows to raise awareness among outdoor enthusiasts, even working with a bait distributor to create labelling that warns against dumping unused bait.

Their research predicts about nine per cent of boreal forests in northeastern Alberta are likely invaded by earthworms. Over the next 50 years, almost half of the forests where earthworms can survive will be invaded.

That could spell a lot of trouble well beyond the forest or trees.

“It has huge implications for carbon dynamics and carbon storage in the boreal forest. Earthworms are potentially a significant enough changer of the carbon cycle that our estimates of carbon storage in the boreal forests may be very, very wrong,” says Bayne, who is now working with Cameron and the Canadian Forest Service to study that very issue.

Citizen worm tracker: There’s an app for that

To help determine the extent of the invasion, Cameron and Bayne have turned to citizen science and a collaboration with U of A colleagues in the Faculty of Education and EdTech Services. They developed the Alberta Worm Invasion Tracker, an online resource and mobile app that allows the public to record worm locations as they’re discovered.

The collaboration was initiated by Norma Nocente and Jerine Pegg, the first in what they hope are many successful partnerships that build a bridge between scientists, educators, students and the general public.

“This issue of invasive species gets at so many ecological concepts, this provides really good context for teachers to be engaged in the project and address some of those concepts in their curriculum,” says Pegg, an assistant professor of elementary education with a strong interest in scientist-teacher partnerships.

Developed in-house by EdTech Services, the Alberta Worm Invasion Tracker website and mobile app go beyond allowing the public to log worm locations. People can view the data on Google Earth—even drilling down to see whether the location is near a road, boat launch or campground.

The site also contains articles, sampling instructions and other resources that teachers can incorporate into lesson plans—information that is already starting to attract interest among educators across Alberta and into Saskatchewan, Pegg says.

One of the notable aspects of the project is it gives students and the public the ability to input their own data, meaning they have a direct hand in the research.

“There are a number of citizen science projects where students are involved in collecting the data, but it gets sent off somewhere and they never see it again. Students here get to work with the data on their own,” says Pegg.

Citizen science really does provide an invaluable way to piece together the larger puzzle about earthworms and their spatial patterns beyond boreal forests, adds Cameron, who still finds time to work on the project from Helsinki, where her research focuses on other invasive species.

And after eight years looking for worms, extra help is a nice bonus, she says.