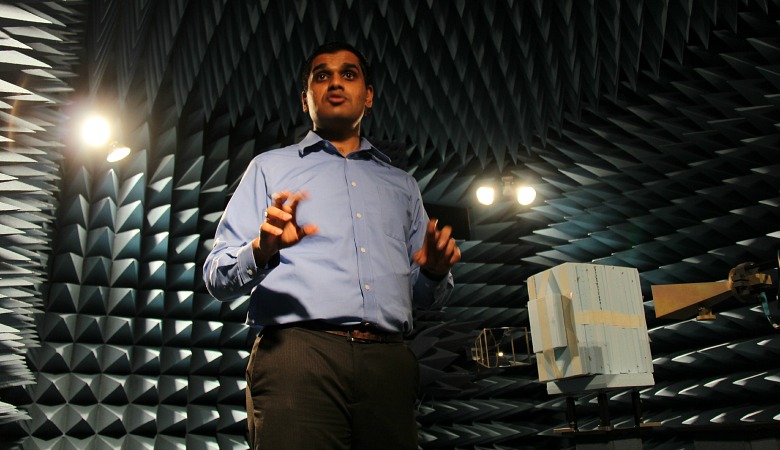 (Edmonton) Thanks to some new equipment, researchers in the Department of Electrical and Computer Engineering are now able to conduct research on antennas in a setting that seems straight out of science fiction.

The new anechoic chamber—part of Ashwin Iyer’s Near-Field Antenna and Metamaterial Characterization Facility—is a shielded room used to measure the direction and strength of signals transmitted by different antennas, and to characterize novel materials.

“Prior to acquiring this chamber, we weren’t doing any of this,” said Iyer. “The university did not have any capacity to measure antennas like this.”

Aside from allowing new research activities, the chamber itself has a striking design. Almost every interior surface of the 16×12×11-foot chamber is covered with long, dense foam pyramids. These pyramids reflect and dissipate the signals that are being tested to avoid any echo. In the centre of the room, running its length, is a mount holding the antenna under test. The mount can move back and forth and swivel 360 degrees. At one end of the room, a probe mounted on a mobile tower can also swivel, move up and down, and span the width of the room. The chamber can operate from radio frequencies at 900 MHz up to millimetre-wave frequencies at 40 GHz.

Taken together, these attributes allow the chamber to measure and characterize antennas up to five feet in diameter by taking multiple measurements throughout the chamber.

“The fields produced by an antenna change as you move away from it,” Iyer said. “Traditional measurement methods would call for you to probe the radiated fields far away from the antenna. However, to measure these ‘far-fields’ for certain large antennas, such as those that may be found on a plane or used in orbiting satellites, you might need a space the size of an aircraft hangar.

“Our facility, on the other hand, measures the fields produced near the antenna. And because these ‘near-fields’ are mathematically related to the far-fields, we can gather many near-field data points and easily transform them into a far-field radiation pattern.”

Being able to measure large antennas in a relatively small anechoic chamber is a boon to the university, but Iyer and his team are more interested in measuring objects much smaller. Specifically, their research is focused on metamaterials—artificially designed materials that are engineered to have properties not found in nature, such as the ability to resolve details more finely than conventional lenses, or the ability to make objects invisible to radar by redirecting signals around them. Right now they’re looking into methods of controlling electromagnetic fields using metamaterials, as well as their applications to practical devices. The chamber can be used to channel energy through their metamaterials, allowing them to quickly and accurately characterize their properties.

Before the new chamber, much of the team’s research was based on simulations.

“We need to measure what metamaterials do to electromagnetic fields near them, but simulation only gives us so much,” said Iyer. “Sometimes we just have to build the thing and try it. Now we can rapidly characterize metamaterials, and rebuild and optimize them.”

Installing the anechoic chamber has been in the works since 2011, when Iyer received a Canada Foundation for Innovation grant for the project. Other matching grants allowed the researchers to begin piecing together the $500,000 system starting last summer. The lab space had to be redesigned, moving cabling, air ducts and sprinkler systems to accommodate the chamber. In the future, Iyer plans to install another articulating arm into the system that will allow for readings to be gathered spherically around an antenna.

Iyer stresses that the team is just getting started using the chamber, and the next few weeks and months will be very exciting for their research.

“Soon, this lab will have experimental capabilities that match and possibly exceed those available at the top labs around the world. This is something we should be proud of at the U of A and in the province.”

Researchers at the University of Alberta have discovered a novel, second mechanism of action by the antiviral drug remdesivir against SARS-CoV-2, according to findings published today in the Journal of Biological Chemistry. The research team …
Read more from this release