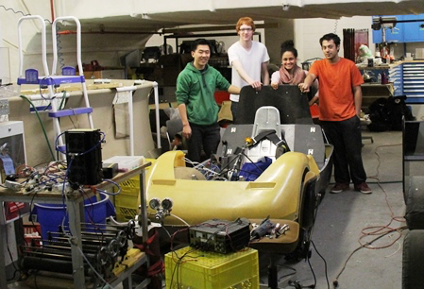 Engineering students gearing up to put their hydrogen-powered vehicle to the test at competition in Texas. 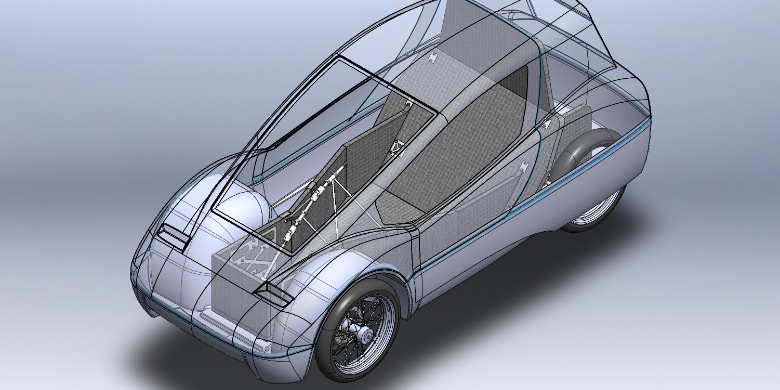 (Edmonton) Considering the price of gasoline these days, it’s more than a little encouraging to hear University of Alberta engineering physics student Balazs Gyenes talk about the U of A EcoCar team’s car—especially when he says things like, “We got the equivalent of about 550 miles per gallon.”

And that was the team’s “old car.”

This week, the team finds out how well its new vehicle performs, at the Shell Eco-marathon in Houston, Texas. The competition runs April 25–27.

The team is making its second appearance at the competition, entering its hydrogen fuel cell car in the Urban Design category. After passing technical and safety tests, teams drive their vehicles 10 laps around a course in downtown Houston, cruising at a minimum speed of 23 km/h. The car that gets the fastest time using the least amount of energy wins.

Gyenes says that being on teams like EcoCar gives engineering students hands-on experience, helps them develop skills in teamwork and leadership, and sharpens their presentation skills in the many public appearances the teams make on behalf of the university.

Most of all, he says, being on the EcoCar team has taught him that the best engineers are the ones who know they make mistakes.

“The whole point of being an engineer is realizing you’re stupid,” he said, while working on the vehicle in March. “I mean it. When you realize you don’t know everything, you start to double-check and triple-check things—and it’s still not right. You don’t even learn this until you’ve seen something fail, hard, after you’ve put hundreds of hours of work into it.

“The whole point is to realize you’re human. And safety follows from that too, because if you realize you’re going to make mistakes, then you start putting in checks to make sure you don’t have accidents.”

His perspective is emblematic of the dedication team members have to the project. And on the surface, at least, that effort is clear. The U of A EcoCar team’s vehicle is a sleek one-seater that looks so good you want to jump in and drive it. And that’s the point.

“Cars in the Urban Design category have to look like cars so that people can see this isn’t just some pipe dream,” said Gyenes. “The driver needs to be seated; the car has to have signal lights, brakes, a horn. In the prototype category you can see cars that will get 3,000 to 5,000 miles per gallon. But they don’t look like anything people would want to drive.”

In 2012, the team took second place in their category.

The new vehicle has a top speed of 35 km/h. Improvements made to the EcoCar by this year’s team include an LCD touch screen to monitor power and speed, and a purge valve to vent fuel more efficiently. It also sports a new carbon fibre chassis and a body made of hemp, Kevlar, flax and cellulose.

The team works under the supervision of mechanical engineering professor Marc Secanell, whose research specialty is hydrogen fuel cells.

The project is sponsored by the U of A’s Faculty of Engineering, Shell Canada, Alberta Council of Technologies, Alberta Innovates – Technology Futures, Rohit, Motive, and bullfrogpower.