Donations will give student group an enduring legacy of innovation. 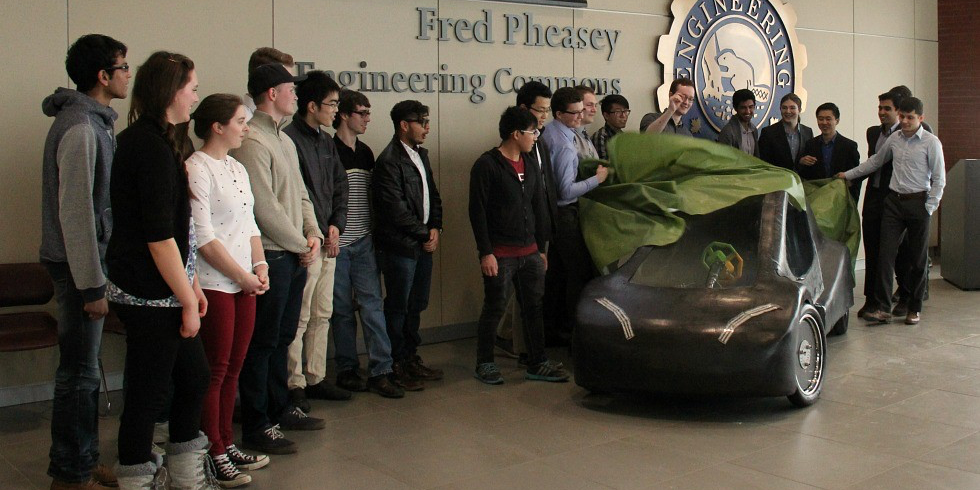 The UAlberta Eco-Car team unveils Alice, its new zero-emissions car. The team is competing in the Shell Eco-marathon Americas April 21–24 in Detroit.

With a new chassis, aerodynamic shell, wheels and electronic controls, Alice is the third iteration of hydrogen fuel cell cars designed and built by U of A engineering students. Team leader Nik Viktorov, a third-year chemical engineering co-op student, says the single-seat car is the result of hard work by talented students.

“I’m incredibly lucky to be here with such a great team,” he told an audience of about 100 assembled for the vehicle’s official unveiling. He noted that the team includes students in various engineering disciplines as well as students from the Faculty of Arts and the Alberta School of Business.

Another key to the team’s success is mentorship, with senior students helping new members.

To ensure the team’s longevity, the group has started a crowdfunding campaign with a goal of raising $10,000. During the unveiling ceremony, the team learned that engineering alumni, through the Spirit of George Ford Endowment Fund, will match donations to the team dollar-for-dollar up to $5,000.

Many of the students had pulled an all-nighter Monday, putting finishing touches on Alice overnight to have the car ready for the unveiling. They then spent most of the day outdoors in and fresh-fallen snow and biting wind, as part of a national competition to see which Canadian eco-car team could collect the most signatures on the day of their car’s unveiling. The winner will receive funding from Shell to have their car transported to the U.S. competition.

After months of hard work, Viktorov and his teammates were moved by the generosity of engineering alumni behind the gift.

“It helps us to know that there for sure will be teams after us, who will learn from our mistakes and make better cars than we can,” Viktorov said.

To support the team, visit the EcoCar crowdsourcing campaign website.