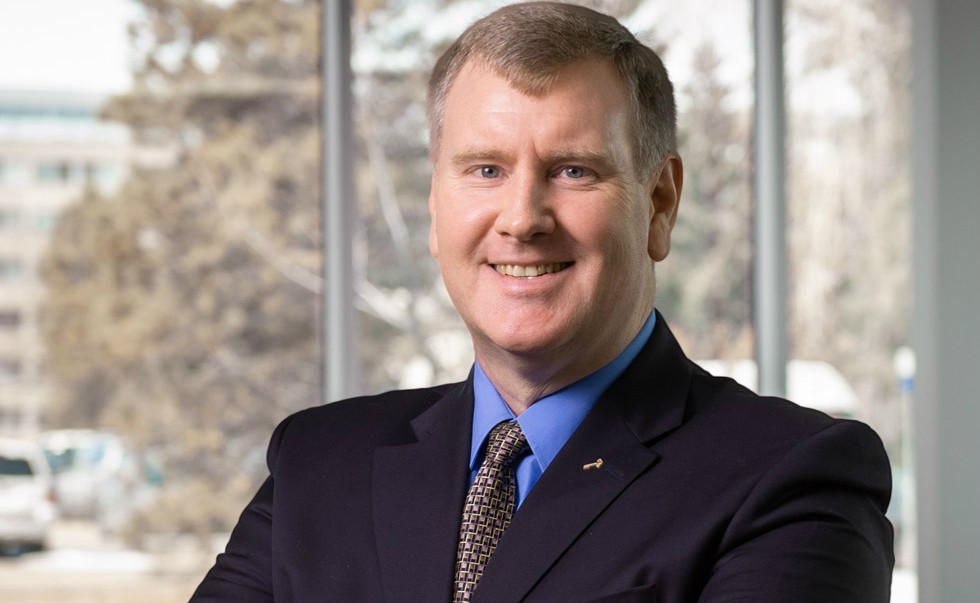 Michael Aherne is the winner of this year's UAlberta Advocate Award for his dedication to mentoring students and helping develop programs at UAlberta's Peter Lougheed Leadership College. (Photo: Richard Siemens)

Funny how people who often have the most to boast about are also often the most humble.

Prolific volunteer and Edmonton-based business strategist—and winner of this year’s UAlberta Advocate Award—Michael Aherne is a prime example of this leadership characteristic.

“Michael has been at the heart of mentorship at the Peter Lougheed Leadership College. The support he extends to students is deeply personal and meaningful. He truly knows something about everything, and he’s always supportive and bringing light to others’ success,” said communications and events co-ordinator Andrea Urbina, who has worked the closest with Aherne at the college.

“We nominated Michael because he’s had a profound mentorship role in our students’ lives and put so much energy into PLLC, helping us with program development,” added Martin Ferguson-Pell, a U of A biomedical engineer and vice-principal of PLLC.

“He has dedicated hundreds of hours to PLLC’s students and programs, making them more wide-reaching and robust as a result.”

Aherne said he contributes so much time to the PLLC because he believes in it.

“I would hope for scholars to realize in time what a remarkable gift the PLLC program is, and can be, in their lives and embrace it and model what they are learning for others,” he said.

“I have worked with leaders in most of Canada’s U15 system as well as all of Canada’s 17 medical schools. I have yet to come across a program like the PLLC program. There is cognitive, cultural and capacity diversity with a focus on deliberative, wise action. There is genuine interdisciplinary practice. There is a focus on sustaining liberal-democratic values and creating social impact across sectors of society.”

PLLC offers a range of learning and development opportunities for U of A students and the public, and a certificate in interdisciplinary leadership studies for students entering their third year.

“Michael played a huge role in contributing to one of our existing programs called ‘Stretch,’ which requires students to develop and complete 200 hours of community service in an area that stretches their comfort zone,’” noted Ferguson-Pell.

Not only did Aherne help develop a sustainable framework for that program and establish resources for current and future students, but he also created a “Stretch Experience Toolbox” for his mentees, Ferguson-Pell added.

“It contains a comprehensive selection of evidence- and real world-based tools that can be used on [students’] Stretch Experience journey and which they can bring out when they come across unfamiliar or challenging situations,” explained Ferguson-Pell. “The results of one such mentee’s experience has resulted in a new partnership between the U of A and the Indigenous Wellness Clinic.”

Several U of A students who are also Rhodes Scholars have participated in Stretch.

Aherne’s hope in being a mentor—the kind who really takes the time to get to know every mentee, according to Urbina—is to encourage PLLC scholars to be deeply passionate about how they can make a difference.

“But, I want them to realize that they are rarely the only ones who care about a particular issue or concern. So, find out who the leaders are, who the peers are, what they are doing, and what they as a PLLC scholar can do to either learn or contribute—or both,” said Aherne.

He also hopes to contribute and encourage their curiosity, effectiveness, kindness, sensibility and humbleness.

“We do need leaders, no doubt. But we find ourselves at a time in history when what we really need is a reimagining and redeployment of leadership distributed at all levels of organizations and society,” said Aherne.

“Whether those people carry the title of leader is secondary to their capacity to demonstrate leadership that is sensible to context. We need principle-based, wise action, and that is something that can be developed and should be expected. We also need PLLC scholars to diffuse what they are learning to their peers across campus and in the community. Most are doing that and it’s wonderful to see.”

For Aherne, the opening of the PLLC in 2015 afforded him a chance to provide students with the kind of deliberative, intentionally structured leadership development experience he wanted back when he was a rising leader after graduating from the U of A with a bachelor of commerce in 1990, and later earning a master of education in adult and higher education in 1996.

“In early 2015, I attended a panel discussion with the Rt. Hon. Kim Campbell, the Hon. Anne McLellan and Ruth Kelly, the late Alberta Venture publisher. Principal Campbell was talking about the forthcoming PLLC and its intent,” he said. “I realized in that moment that PLLC held the kind of semi-structured leadership development experience that was simply not available to me as a young leader.”

Instead, he’d had to seek out his own mentorship, from a six-week National Air Cadet Senior Leaders Course at CFB Cold Lake as a teenager, to being the first U of A graduate student to complete the United Nations Graduate Study Programme in Geneva in 1995.

A passion for being engaged—and ultimately engaging others—to seek out the best of their leadership capacities runs deep in Aherne’s veins. As a student he was awarded the Gold Key Recognition Award in 1990 for outstanding contributions to the campus community, and his involvement with the U of A has continued over the years.

Aherne was also a co-founder of the Canadian Pallium Project and Pallium Foundation of Canada, incubated as a university-community engagement social innovation startup between the Faculty of Extension and the palliative care medicine division in the Department of Oncology (2000–2003). He received the Canadian Hospice Palliative Care Leadership Award in 2006.

As a U of A alumnus, he gives back by sharing his wisdom, knowledge and expertise to develop and inspire the next generation of leaders, and in doing so, benefiting the community at large and imparting on the students the value of and responsibility to making a meaningful difference in Edmonton.