Right within the city of Edmonton, a rich layer of dinosaur bones reveals how dinosaurs lived and died in prehistoric Alberta. 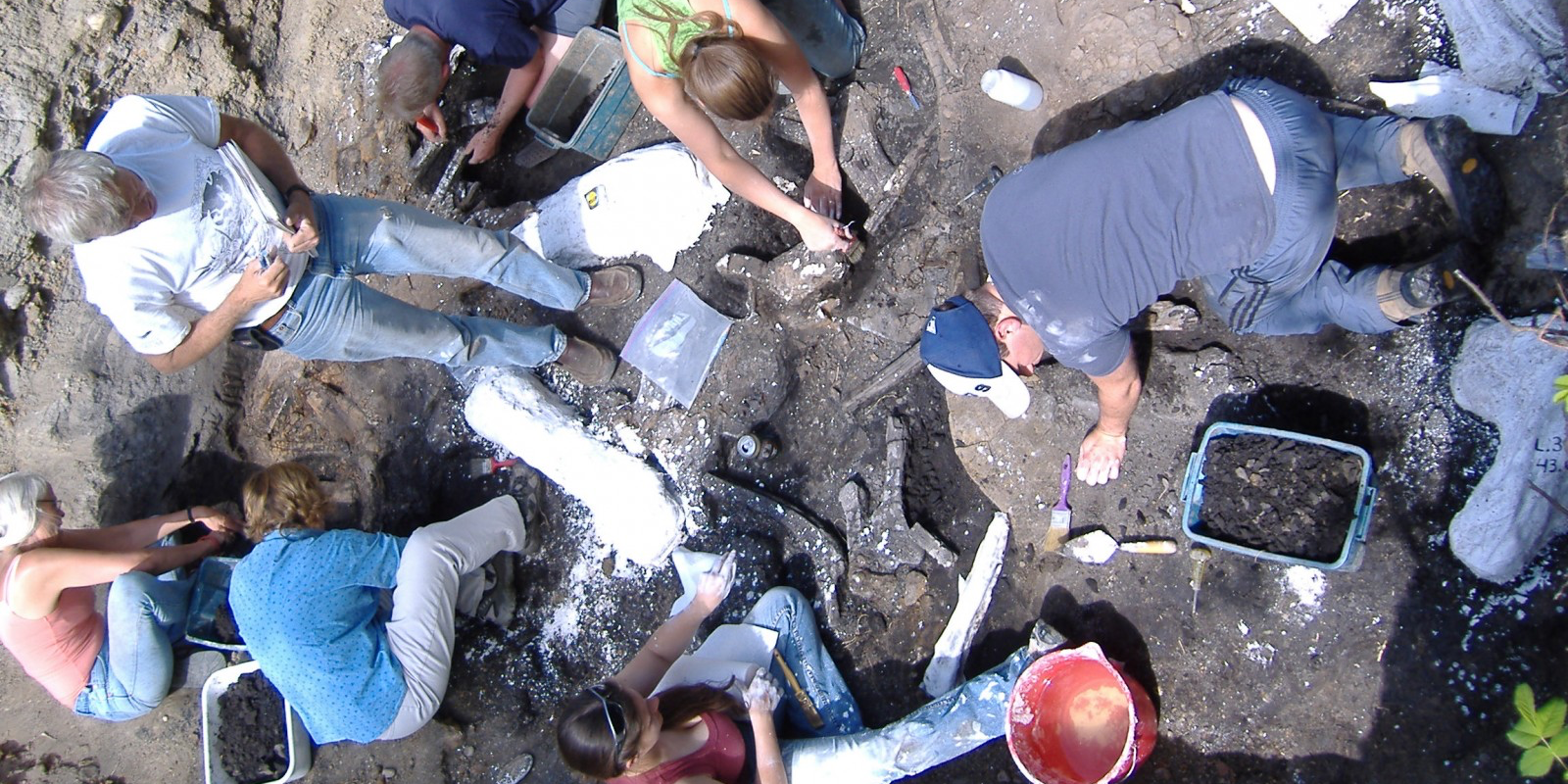 (Edmonton) Right within the city of Edmonton, a rich layer of dinosaur bones has been excavated each summer since 2006 by a team led by the University of Alberta's Philip Currie, Canada Research Chair in Dinosaur Paleobiology. The U of A's Laboratory for Vertebrate Paleontology has amassed a collection of more than 800 bones from this single bonebed, and now a collection of papers published in a special issue of the Canadian Journal of Earth Sciences reveals the secrets behind the lives (and deaths) of these dinosaurs.

"This collection of papers represents a significant contribution to our understanding of the dinosaurs that lived in prehistoric Edmonton," says Currie. Most of the bones at the site belonged to herbivorous, duck-billed dinosaurs called Edmontosaurus, which was one of the largest of its kind. But a few pieces of other dinosaurs have been found as well, like the large meat-eating Albertosaurus (a slightly smaller relative of Tyrannosaurus), the small predators Troodon and Saurornitholestes (relatives of Velociraptor), an ostrich-like dinosaur called an ornithomimid, and a horned dinosaur related to Triceratops.

The precise location of the bonebed is kept secret to prevent vandalism to this scientifically important site. Fossils in Alberta are protected by the Historical Resources Act, and digging is only allowed by permit; excavating a fossil without one can lead to steep fines or even jail time.

Scientists from around the world contributed research towards the special issue, which covers topics like how the dinosaurs in this bonebed grew, why they died in this particular location, how old the site is geologically, and more. Phil Bell—who was a U of A graduate student when he began studying the Edmontosaurus bonebed and is now a lecturer at the University of New England in his home country of Australia—notes the site's significance. "This site has yielded a staggering number of bones from dozens of animals all jumbled and mixed together like a Cretaceous jigsaw puzzle. Sites like this are important because you can start to deduce things about the behaviour of dinosaurs, the size of the herds, the mix of young and old animals, and perhaps also what was responsible for their death.”

Because the bonebed is relatively easy to access, it has also served as the location for a paleontology field school through the U of A. Each summer, five to 10 undergraduate students learn the techniques for excavating a dinosaur bonebed, like how to map the bones within the quarry and how to identify which parts of the body are uncovered. The students then conduct an original research project based on their experiences working on the bonebed, and many former students have even polished up their term papers into full academic research papers.

According to one such former student, Evan Vanderven, "The undergraduate students at the University of Alberta have a unique opportunity to work at, and do research on, these amazing dig sites right here in Edmonton. It has given many of us (including me) the chance to work with experts in the field and contribute to our first academic publications."

Katherine Bramble, who is now a graduate student in Currie’s lab, says, "Having the opportunity to work on the Danek Bonebed has been an invaluable undergraduate research experience, and has led me to know I want to pursue paleontological research for a career."

Many of the fossils collected from the bonebed were prepared by volunteers, who have donated more than 4,000 hours of work in the lab. “The bulk of our specimens are now prepared by dedicated volunteers, many of whom have won awards from the university for their service,” says volunteer co-ordinator and PhD candidate Michael Burns. “We welcome anyone with patience and an interest in dinosaurs or fossil preparation to give it a try.”

The Danek Bonebed will continue to form a focal point for dinosaur research at the U of A through the annual field school and resulting research projects. The organizers hope the Canadian Journal of Earth Sciences special volume will promote continued research on the rich fossil resources within the Edmonton area.

You can see fossils from the Edmontosaurus bonebed at the University of Alberta Museums' Discovering Dinosaurs exhibit at Enterprise Square until Jan. 31, 2015.