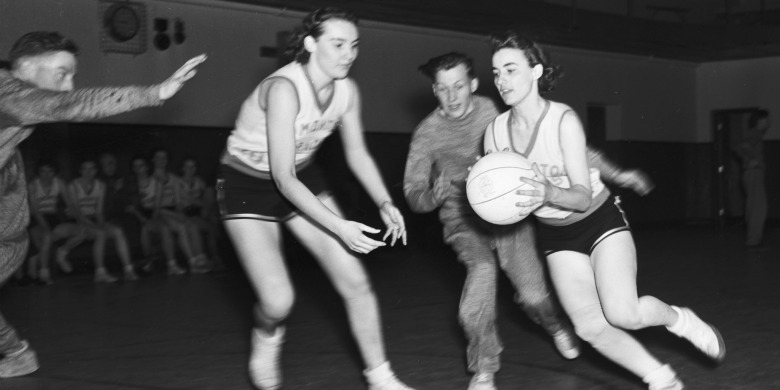 (Edmonton) It is a story of triumph unparalleled in Canadian sports history. While scarcely remembered today, the international glory of this almost unbeatable group of young women easily equaled the Eskimos and Oilers sports dynasties of many decades later.

The Edmonton Grads basketball team, most of them graduates of the city’s McDougall Commercial High School, dominated the sport between 1915 and 1940 under their legendary coach, Percy Page. Their remarkable talent prompted the game’s inventor, James Naismith, to call them “the finest basketball team that ever stepped out on the floor.”

During their 25-year run they won 380 of 400 games—a staggering 95 per cent winning record—and only seven teams were able to score 50 or more points against them in a single game. Edmonton had a population of just 60,000 in the early 1920s, but 6,000 people turned out to cheer for the Grads. The team travelled more than 125,000 miles in Canada, the United States and Europe, crossing the Atlantic three times to defend world titles.

Before Edmonton was officially the City of Champions, these champions truly put the city on the map. Now, for the first time, their story is laid out in meticulously researched detail in The Grads are Playing Tonight! by M. Ann Hall, U of A professor emeritus of the U of A’s Faculty of Physical Education and Recreation.

Hall taught for three decades at the U of A until the late 90s, also serving as chair of the women’s studies program in the Faculty of Arts, and has since published on women in Canadian sports. The Grads are Playing Tonight! is published by University of Alberta Press.

“They won their games on outdoor and indoor courts of all sizes,” writes Hall, “on courts with glass backboards and no backboards, in low ceiling halls, allowing little loft to the ball, in all kinds of weather, and under all conditions. Their records were established with only two evening practices a week, since every Grad held a full-time job, usually in an Edmonton business.”

How was such amazing success possible? According the Hall, looking to the coach for insight failed to provide much insight into the winning formula. He claimed there was no system. It was simply about stripping down to fundamentals: shooting accurately, passing fluidly, and moving as a team rather than as individuals.

“Thousands of fans have imagined that the Grads have a whole hatful of streamlined, magical razzle-dazzle plays, the key to which no opposing team or fan could ever find. The Grads certainly give that illusion,” wrote Harold Cruickshank, an early observer of the team.

“They specialize in baffling short passes, pivots, tricky cut-ins, aerial and bounce passes and a myriad of other eye-bulging shifts and shots, but they are merely perfected elemental plays.”

The Grads, much like today’s national women’s hockey team, regularly played against men’s squads to hone their skills, often beating them. They also played against the U of A’s varsity team, against which they set the record for their highest score, 136, in 1934.

The team disbanded in 1940, mainly because the government needed their arena for training during the Second World War. Over the years, the team of 36 players passed away; only two of them, Kay MacRitchie MacBeth and Edith Stone Sutton, are still alive. Sutton celebrated her 100th birthday last year.

Writes Edmonton Sun sports columnist Terry Jones of The Grads Are Playing Tonight!: “To me, this wonderful work by author M. Ann Hall is like opening a time capsule. What makes this book exceptional, I think, is the scholarly research approach, which was required at this time for no other reason than to make this now so-difficult-to-believe story believable.”