U of A political scientist offers recommendations to help communities work together in responding to hate. 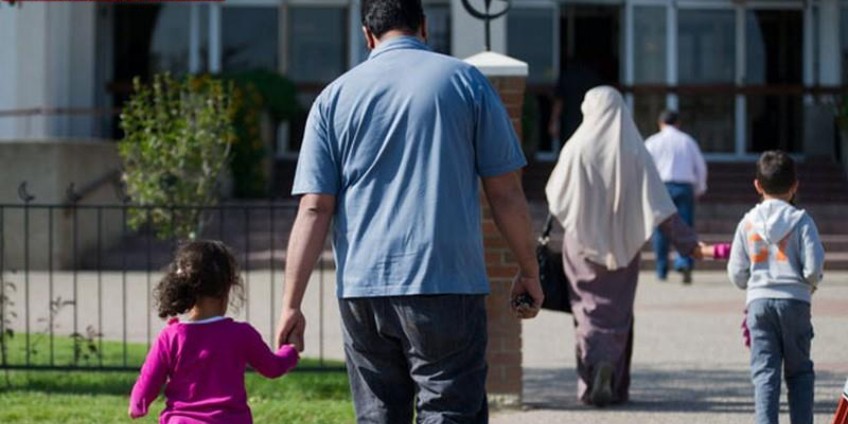 Worshippers gather at the Al-Rashid Mosque in north Edmonton. A new report details how the community was affected by an incident last January when members of an anti-Islamic group staked out the mosque during a prayer service. (Photo: beautifulmosque.com)

A confrontation at Canada’s oldest mosque is a chance to move beyond “thoughts and prayers” to find constructive ways to combat violence, according to a University of Alberta political scientist.

Earlier this month, the Organization for the Prevention of Violence released a report delving into an incident late last January, when five members of an anti-Islamic group staked out the Al-Rashid mosque during Friday prayers, taunting and insulting worshippers in the hopes of provoking a reaction.

While the incident didn’t result in violence, John McCoy said that members of an extremist group entering a place of worship was an unusual escalation and use of intimidation tactics.

“This is not a tragedy on the kind of scale we see with the massive shooting in the Christchurch incident, Tree of Life Synagogue incident, but it does have a significant impact,” said McCoy, who is also executive director of the Organization for the Prevention of Violence (OPV), a non-government organization tasked by the federal government with preventing violent extremism through local partnerships and collaborations.

During the incident, one of the five men wore a toque with the word “infidel” in Arabic and filmed his entry into the mosque. Police were called in. The clash prompted national headlines and was followed up by a series of meetings with politicians, police and members of the mosque, an Edmonton institution that traces its roots back to 1938.

In partnership with the mosque, the OPV surveyed 70 community members. Nearly a third expressed shock and a quarter expressed fear for their safety, particularly for women and children wearing the hijab. Fourteen per cent expressed disappointment and dismay. Members also worried about the possibility of escalation and copycat events if something wasn’t done to prevent it.

McCoy said that the results aren’t surprising. The shock expressed shows that the event was an outlier, but the other reactions show how community belonging and a multicultural political framework were undermined.

The report recommended stronger connections between the Al-Rashid mosque and community policing, and working with the City of Edmonton to improve safety through building design. The report also included a recommendation to build a city-wide prevention initiative and the formation of organizations focused on addressing racism and hate.

McCoy sees the Al-Rashid report as a companion piece to an extensive report released in June on violent extremism, which built on hundreds of interviews and chronicled the changing patterns of hate crimes in Alberta.

Violent extremism takes many forms, McCoy said, but most forms are built around an ideology, marked by an ‘us versus them’ outlook and calls for extraordinary action to respond to a growing crisis. While it’s easy to think of extreme groups as influential, they are often tenuous and fractious. More than 100 groups in Alberta have popped up, experienced a flourish of activity, struggled with leadership issues, then dissipated.

“There’s layers to the threat,” McCoy said. “There’s the hate-based activities that aren’t going to stray into violence, but there’s a more amorphous general spectrum of activity, especially on the lone actor side, that can demonstrably result in significant violence.”

Many of the groups that were ramping up last summer appear to have dissipated, McCoy said. That appears to have happened to the Claan, the group that targeted Al-Rashid. Originally formed as a splinter “patriot” group from the Edmonton branch of Soldiers of Odin, the Claan has avoided public activity and been kicked off Facebook.

McCoy argued the scale of threat of groups like the Claan shouldn’t be blown out of proportion. But in a world of massive terror events and web-fuelled hate, it’s naive to think that a violent incident couldn’t happen. Instead of fear, McCoy thinks much can be learned by giving a voice to communities that experience intimidation first-hand.

“That’s the story that should get out there: what is the immediate reaction and what do communities see as solutions,” McCoy said. “If it can inform public policy in a modest fashion, that’s a good thing.”