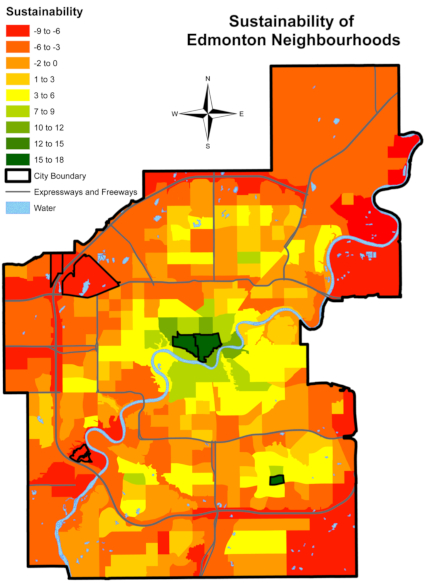 The U of A student researchers' data-based map shows Edmonton's most sustainable neighbourhoods are clustered near the city's core—with the notable exception in Millwoods to the southeast. (Image: Jack Cherniawsky and Matthew Goebel)

Edmonton’s core offers most sustainable living, U of A study shows 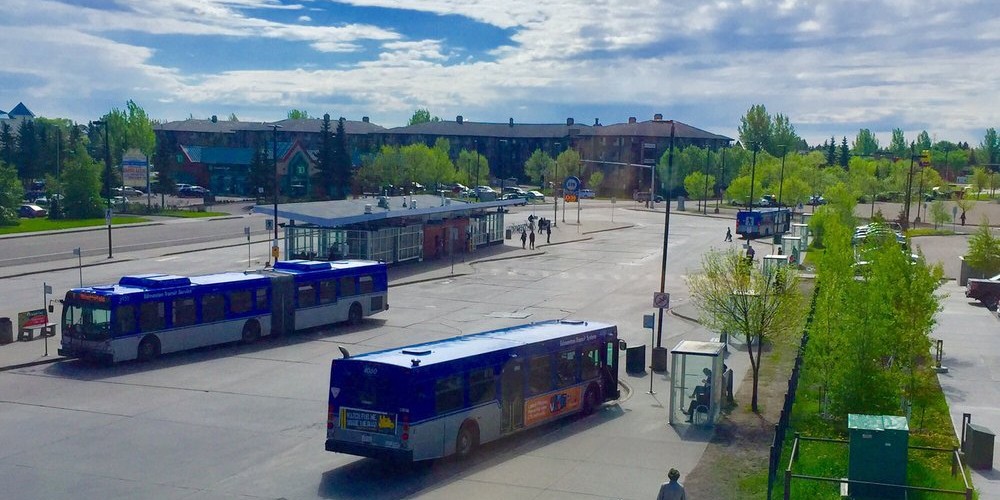 The area near Millwoods Town Centre ranked high for sustainable living in Edmonton thanks to transit access, high population density and extensive multi-use trails and mixed-use land, according to a study by U of A urban planning students. (Photo: ETS via Yelp)

A little piece of suburbia is challenging the communities in and around the downtown core as Edmonton’s most sustainable, according to a University of Alberta suitability review of the economic, social and environmental well-being of Edmonton neighbourhoods.

“Oliver and the downtown scored quite well, which we expected to happen thanks to their higher density and extensive commercial mixed use,” said Jack Cherniawsky, who, along with fellow School of Urban and Regional Planning classmate Matthew Goebel, conducted a sustainability analysis of Edmonton neighbourhoods for their GIS and Advanced Cartography Social Science class.

“But the mixed-use area neighbourhood that contains Millwoods Town Centre being as sustainable as it is caught us off guard.”

Using the same standards employed in the top U.S. and British neighbourhood sustainability models, the pair used the city’s open-source data to fill out a list of sustainability opportunities and constraints of official City of Edmonton neighbourhoods.

“We wanted to see how Edmonton stacks up against those standards.”

A weighted points system resulted in a score for each of Edmonton’s 375 neighbourhoods. These scores were assigned a colour and then sunk into a heat map overlaid with transit assumptions that included the future completion of the Valley Line and West Line LRT projects.

Cherniawsky said the overall map looks as one might expect. Edmonton’s most sustainable areas sit at the core, thanks in part to the residential density and walking distance to a host of amenities. The inner city sustainability gradually wanes as suburbia takes over, with some exceptions.

Cherniawsky said the transit access and high population density of the neighbourhood in the immediate vicinity of Millwoods Town Centre, as well as extensive multi-use trails and mixed-use land, create what planners refer to as a “node” in the city.

“You could effectively live there, get all your essential services and potentially even employment in that community, making your transportation-related emissions comparatively lower than other neighbourhoods that are purely residential in character,” he said.

“You really can’t meet any of your needs in those communities without driving on an expressway.”

He noted newer communities typically suffered a similar fate as far as sustainability is concerned, as they lacked mixed use and transit.

“Even if they were more dense than some of the inner neighbourhoods, they lacked the amenities,” said Cherniawsky.

He added that although sustainable neighbourhoods is one of the four goals of the City of Edmonton’s strategic plan, The Way Ahead, the fine-grained policies that control what can be built where haven’t integrated principles of sustainable urban design.

“That’s why we wanted to do this topic, because we couldn’t find an evaluation of how well Edmonton is meeting its neighbourhood sustainability objectives,” he said. “Currently there appears to be a lack of synergy between high-level priorities and what development is actually getting approved and currently existing in Edmonton neighbourhoods.”

Still, Cherniawsky noted that while his team’s analysis showed transit is fairly accessible in many areas of Edmonton and many new neighbourhoods are home to well-connected, multi-use trail networks, it is a difficult proposition to create a sustainable community quickly.

“A lot of newer neighbourhoods scored poorly on transit and commercial amenities because this infrastructure simply isn’t there yet. It takes time to build and it can also be risky to invest in areas without a substantial population to actually use the infrastructure.”

Edmonton’s core offers most sustainable living, U of A study shows