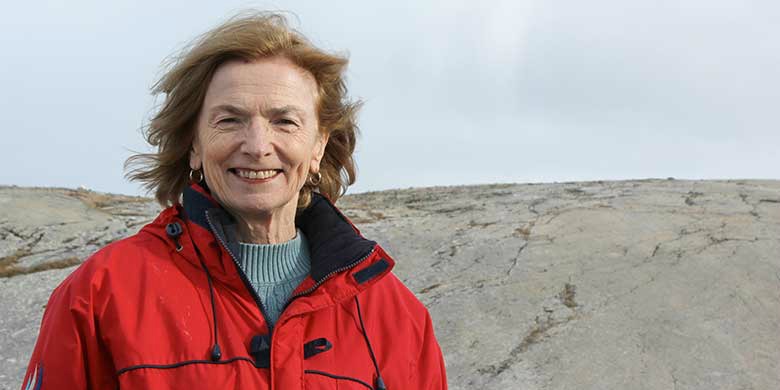 (Edmonton) A University of Alberta nursing professor is winning accolades for her work to teach midwifery in Nunavut while preserving local practices and traditions.

Beverley O’Brien, a professor in the Faculty of Nursing and registered midwife, has written a new book, Birth on the Land: Memories of Inuit Elders and Traditional Midwives, which contains the stories and memories of elder women and midwives living in Nunavut.

The book is part of a midwifery training program that O’Brien helped develop, with partners at Nunavut Arctic College and Laurentian University, so expectant mothers can give birth in their own communities rather than travelling thousands of kilometres to centres like Winnipeg—a major challenge facing the North. O’Brien helped develop the program over parts of three years and during that time interviewed several elders and traditional midwives about their centuries-old traditions.

“The idea with our program is to not just give lip service and say every midwifery course has an Inuit cultural component, but to make sure that it does,” O’Brien says of the first-person stories published in English and Inuktitut. The book is also a resource for southerners living and working in the North to help them gain an appreciation for the richness of the culture.

Published by Nunavut Arctic College with funding from the territorial government, Birth on the Land is available in English and Inuktitut and recently earned praise in the Nunavut legislature. That feedback was special for O’Brien, who first lived in the North 30 years ago as a public health nurse in several communities on Baffin Island—a time when she says many southern health-care professionals were downright “colonial” in their patient interactions.

That’s gradually changed over the years, and she hopes to change it further with Birth on the Land.

“We have to make sure the midwifery practices we teach are inclusive, that in fact elders are involved in their care and we respect what they’re saying,” she says. “A lot of their traditions and stories contain very good information—encouraging women to eat traditional land foods, encouraging them not to smoke, a variety of things where they can help, and probably do a better job than we can.”

Giving birth on the land

Students in the midwifery program can attain four education levels, from a maternity care worker certificate all the way to a degree—training that meets Canadian midwifery standards. The program has graduated 10 care workers and two midwives, with four more students coming on stream—expertise that will address a shortage of midwives, a problem that has led to 70 per cent of Inuit women flying south to give birth, often leaving their families behind for weeks at a time.

Nunavut’s first birthing centre opened in Rankin Inlet in 1992, but it was staffed by southern-trained midwives and retention was an issue. Since the program launched, Inuit midwives started working at the centre and another that opened in Cambridge Bay; midwifery is also being introduced this fall at Qikiqtani General Hospital in Iqaluit, where O’Brien says most births occur.

“In each of the regions, there’s a place for a woman to go and give birth outside of their homes, which are very crowded with several generations due to not enough houses.”

Giving women the option to give birth in their own communities has been a longtime dream of Annie Buchan, a former community health worker who was an interpreter for O’Brien. Buchan says she embraced her role helping preserve the history of birthing experiences of Inuit women, in their own language.

“As an Inuit woman, I’ve been interested in community birthing all my life,” says Buchan. “I’m looking forward to the day the women will be able to have their babies at home with their spouses around and their families around.”

O’Brien says she’s grateful for the support of Nunavut Arctic College and the Laurentian University midwifery education program, as well as the nursing faculty and the U of A as a whole, which has shown a strong commitment to the North.

“For a large, international university, the University of Alberta has been very supportive of my work and this project.”