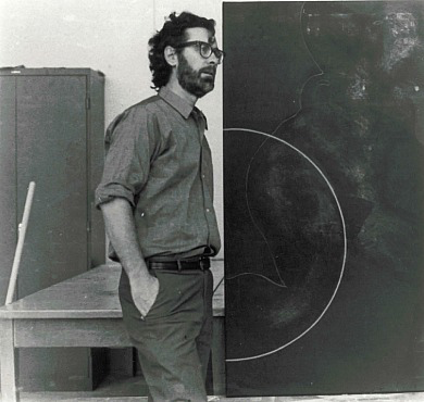 Beloved art professor and painter's influence on students is as indelible as the landmark he bestowed on the University of Alberta. 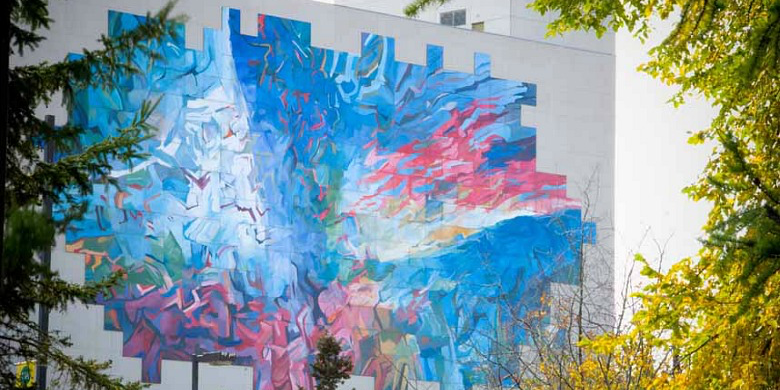 West and North, Norman Yates's mural on the Education North building, is one of the most recognizable landmarks on the University of Alberta campus. (Photo: Richard Siemens)

(Edmonton) Of all the University of Alberta landmarks that come to mind when people think back to their time on campus, none are more memorable than the massive blaze of colour that adorns nearly five storeys of the north wall of the Education North building.

Known as West and North, the massive 6,500-square-foot mural was certainly the largest gift, if not the final one, of longtime art professor Norman Yates before he retired in 1989.

Other gifts Yates imparted to the U of A included a string of paintings now in the U of A Museums collection and, more important, the influence he had on legions of students who passed through his classroom in his 33 years on campus.

Yates, who was known for a loving nature that shone through in his art, his students, and his family and friends, died Feb. 9. He was 90.

Although he was born in Calgary in 1923, Yates was raised on the still prairies of Saskatchewan, which might explain his approach to painting and his choice of canvas, at least three feet by six feet in size.

“The very first thing that happens for me is the necessity of movement,” said Yates to an interviewer while attending a Victoria art exhibit in February of 2011. “I sense, with that kind of space in front of me, I must allow things to move. The only way to get movement in the beginning is to apply the paint in a very spontaneous way, so there is no planning.”

In some ways, the same could be said of his career. Nobody could have planned for the outbreak of the Second World War, which altered any plans Yates had as he would end up serving for four years as a radar technician in the Royal Canadian Air Force.

After the war, Yates attended the Ontario College of Art, graduating in 1951. He lived in Toronto for three years with his wife Whynona before accepting a job at the U of A’s Faculty of Arts.

At the U of A, Yates had a chance to teach everything from art history to design. His own philosophy of art, beyond his own need for movement, focused on what’s really before the artist.

“I like people to know that what you’re dealing with, first of all, is a flat piece of paper and it’s totally surface,” said Yates. “You’ve got a real strong sense of surface, but at the same time, if the paper is white you can get also get a sense of being able to enter it and you think of it then as space. You have this juxtaposition between the space and surface. It’s what happens in between those things that makes the painting.

“That is a visual dynamic, you might say, that keeps life and visual energy in the painting. All my work is based on those very simple notions.”

Jim Corrigan, a former student of Yates’s and curator with the U of A art collection, says Yates referred to this concept as “landspace,” an idea that evolved out of the beloved art professor’s “land studio,” a quarter section of land Yates owned near Tomahawk where “he grew to think of the space in a painting or drawing as being all-encompassing, not just what was in front of the artist.”

“The ultimate expression of this idea, of course, is his monumental mural, West and North,” said Corrigan, adding that Yates—just like the mural’s seemingly continuous motion—was probably working till the end.