Electrician trades in voltmeter to play around the world

You’re going into a country where they’re still rebuilding and they’ve lost so much, and yet the kids are some of the happiest you’ve seen in your life.

On the way to his phys ed degree, Anthony Bourque became a journeyman of a different kind to work with kids in Cambodia. 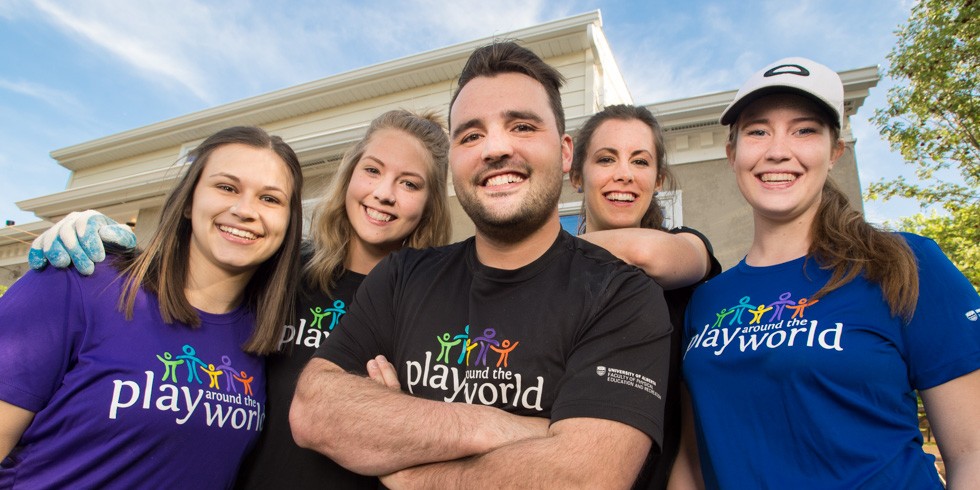 Anthony Bourque with his Play Around the World student crew. Bourque traded in a career as an electrician for the opportunity to work with children and physical therapy. (Photo: Richard Siemens)

At 21, Anthony Bourque figured he had it made. As a journeyman electrician, he was making good money, shouldering a good share of responsibility installing lighting in the Edmonton International Airport expansion and managing a crew.

His career prospects looked bright, but something was missing. Though the work was challenging and he enjoyed the people he worked with, the caustic culture that sometimes pervades the construction industry began to eat away at him.

“There’s a lot of behaviour towards employees you could not get away with in a place like the university,” he says. “You’d be written up for verbal abuse. I didn’t like treating people like that, and I didn’t like being treated like that.” But as Bourque moved up into management, he felt increasing pressure to crack the whip on wayward employees.

To deal with the stress, he started exercising in his spare time. A few injuries sent him to physical rehabilitation, and he found the process inspiring. “I thought, ‘Wow, this is really cool. I like way the body works and the way physical therapists can help people heal.”

That’s when he decided to change course and go back to school, first getting his Alberta Fitness Leadership certification, then enrolling at the University of Alberta to start his bachelor of physical education.

“I got quite a few looks that said, ‘What, you’re a journeyman electrician in Alberta and you’re going back to school?’”

Quitting his job, he admits, was scary. “I was leaving a definite source of income and security. I’d already been in the trades for five or six years and made a lot of friends. I was going from a safety net to something a little more unknown.”

One day in his first year, he saw a class presentation on Play Around the World, the U of A’s renowned service-learning course in the Faculty of Physical Education and Recreation that sends students overseas to help children fulfil a basic need in their lives.

“It was the coolest thing,” says Bourque. “You get to facilitate play with kids, go abroad to someplace like Thailand or Cambodia to do it, and it’s part of a course. How could you say no to that?”

The program manager, Mary Ann Rintoul, showed Bourque’s class videos of students and children coming up with creative play ideas on the fly, such as putting together picnic tables to play Ping-Pong with shoes. “It just looked like so much fun,” says Bourque. “I thought, ‘Man, I’d love to do this.’”

In addition to Thailand and Cambodia, Play Around the World now also offers placements in the Northwest Territories and Peru. Its philosophy is based on the declaration signed at the 1989 UN Convention on the Rights of Children “that every child has the right to rest and leisure, to engage in play and recreational activities appropriate to the age of the child and to participate freely in cultural life and the arts.”

Smitten by the course, Bourque wanted in, but he had to bide his time until second year when he became eligible. In the meantime, he helped people with physical disabilities work on fundamental movement skills at the U of A’s Steadward Centre. The following year, after a rigorous selection process, he joined the PAW team doing his first summer placement in Phnom Penh, Cambodia, between third and fourth years.

The experience, he says, has been nothing short of life-changing. “You’re going into a country where they’re still rebuilding and they’ve lost so much, and yet the kids are some of the happiest you’ve seen in your life. They have so very little, and are so happy and so grateful to have us, and they’re willing to give you whatever they can.

“It was just the pure joy of not only the kids, but other people you meet. It really affected me.”

His capstone project at a facility for disabled children involved designing a system of lights to help photo-sensitive children slowly adjust to brighter levels of light. It was one way to take advantage of the electrical training he thought he’d left behind.

Bourque graduates this month with his physical education degree, but don’t look for him at convocation. He left for Cambodia again a month ago for his final summer with Play Around the World, this time as a student leader, responsible for initiating three new team members. After that, if a job he’s applied for comes through, it’s off to China to do similar work with children there, and perhaps later a master’s degree in the U.K.

“Anthony is passionate about every child's right to play, and exemplifies the ideals of service-learning as he mentors his team in the hands-on work of play with children of all abilities,” says Rintoul. “He inspires his team on a daily basis to engage in play delivery, respect cultural diversity and serve selflessly for the greater good. He also has a wonderful caring spirit and desire for others’ successes to be realized.”

Whatever he finally settles on in his career, Bourque says he hopes it will involve children and physical therapy.

“I really want to work with children, and I really enjoy rehab, so to do that with children would be fantastic.”

Electrician trades in voltmeter to play around the world
Newsroom