New and renewed chairs will allow top researchers to further work with potential to improve lives in Canada and beyond. 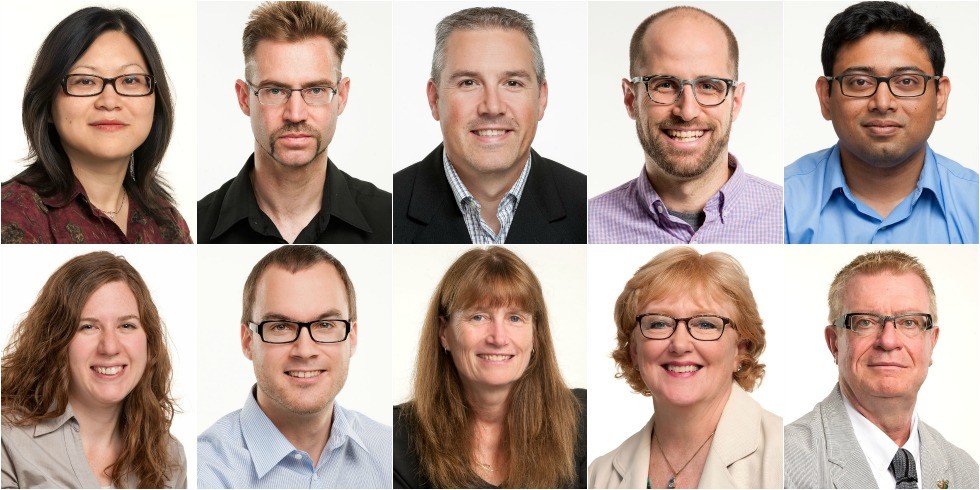 (Edmonton) Healthy food is a key preventative health strategy for Canada and many other countries around the world, and a major focus to help transform disease-based health-care models into a sustainable, prevention-based model.

Helping lead this transformation is Lingyun Chen, an associate professor in the Department of Agricultural, Food and Nutritional Science, who was one of 11 University of Alberta researchers named as Canada Research Chairs today.

Now in her seventh year at the U of A, Lingyun says her research on proteins in cereals, pulses and oilseeds aims to advance basic understanding of how plant protein structures are related to their functions, and applying that knowledge to develop safe and naturally sourced biomaterials for food and non-food applications. She has a special interest in plant protein-based nutraceuticals—non-food products such as unsaturated fatty acids, vitamins and antioxidants that have a positive effect on health—to create new functional foods.

She says food for health is a key strategy for Canada and around the world to transform health-care models based on treating disease into more sustainable, prevention-based models.

“My research directly contributes to this strategy with the purpose to create functional foods to improve public health and decrease the risk of chronic disease,” she said, adding development of new biomaterials from renewable agricultural resources will help grow the bioproducts industry. “This research will also contribute significantly to the profitability and sustainability of the crop industries, which are core agriculture sectors in Canada.”

The research is also building on a century of food security research at the U of A that has been translating to food solutions around the world.

“I like the stimulating and supportive environment at the U of A for building multidisciplinary collaborations, which are essential to foster scientific breakthroughs and creativity,” said Lingyun. “My research has greatly benefited from collaboration with colleagues in food science, human nutrition, crop production, animal science, biochemistry, material engineering, pharmaceutics and nanotechnology, through the exchange of graduate students and through joint projects and publications.”

Ingo Brigandt, named CRC in Philosophy of Biology, is looking to understand how values guide the practice of individual scientists, the interdisciplinary relationships among scientists and the growth of scientific knowledge. Insights gained will also help scientists be more reflective about the scientific values they use and can be applied to improve science education.

Dean Eurich, professor in the school of health, was named CRC in Chronic Disease Prevention and Management. His research will allow front-line health professionals and policy-makers to improve the health of patients living with chronic diseases.

Mathematics researcher David Favero was named CRC in Derived Categories. Using physical interpretations of space and time, Favero, who is coming to the U of A from Vienna, Austria, is looking to help develop surprising and unique results about geometric shapes by relating them to phase transitions (e.g., water changing into ice) in high-energy physics.

Mechanical engineering professor Aloke Kumar was named CRC in Microfluidics for Biological Systems. He uses electrical fields to prevent or disrupt formation of biofilms, or complex bacterial communities, on different surfaces, particularly those relevant to the field of medicine and water filtration.

Physicist Lindsay LeBlanc, who is coming to the U of A from the University of Maryland, was named Canada Research Chair in Ultracold Gases for Quantum Simulation. LeBlanc mimics quantum mechanical systems using a flexible and adaptable ultracold gas to explore the optimal conditions for collective quantum behaviour in an effort to find novel and efficient ways to engineer electronic devices.

Also in the Department of Physics, Joseph Maciejko was named CRC in Condensed Matter Theory. Coming to the U of A via Princeton University, Maciejko is using theoretical methods to explain and predict the properties of topological phases of quantum matter such as topological insulators for possible use in novel energy-efficient electronics.

The announcement also included tier 1 CRC renewals for Sandra Davidge, researcher in the Department of Obstetrics and Gynecology, as CRC in Maternal and Perinatal Cardiovascular Health; physicist Aksel Hallin as CRC in Astroparticle Physics and Lori West, professor of pediatrics, surgery and immunology, as CRC in Cardiac Transplantation.

André Grace was the lone new tier 1 chair, which provides funding of $1.4 million over seven years. Grace, CRC in Sexual and Gender Minority Studies, is investigating the impact of stressors, risk-taking, asset-building and indicators of thriving on how sexual and gender minority youth grow into resilience.

In 2000, the Government of Canada created the Canada Research Chairs program to establish 2,000 research professorships in eligible degree-granting institutions across the country. The program invests $300 million per year to attract and retain some of the world's most accomplished and promising minds.