The approaches we are using are way out there to what is currently being done in doping control. There’s a lot of risk, but at the same time, the potential reward is huge.

New research designed to keep anti-doping agencies one step ahead of cheating athletes. 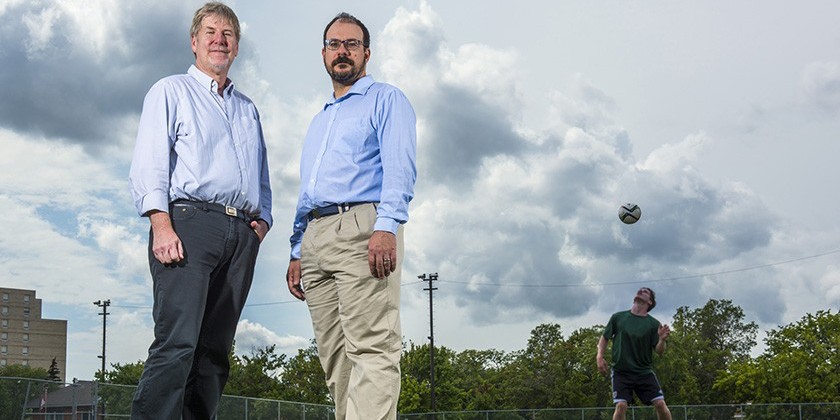 Fred West (L) and James Harynuk (R) have received funding from the Partnership for Clean Competition to move their anti-doping testing research out of the lab and onto the field.

It’s only July, and already 2016 may go down in sports history as the “Year of the PED”. In January, five-time National Football League Most Valuable Player Peyton Manning faced allegations of using human growth hormone (he has just been cleared of all charges by the NFL). Maria Sharapova, the former number one ranked female tennis player in the world, was suspended two years in March for testing positive for melodium. Miami Marlins all-star Dee Gordon was suspended for 80 games in April for using testosterone and clostebol. Last week, Russia lost its appeal to have 67 track and field athletes reinstated for the Olympic Summer Games in Rio. Seven Russian swimmers have also been banned, and the International Olympic Committee (IOC) is facing criticism after it rejected a call from the World Anti-Doping Agency (WADA) to ban the entire Russian team from the games. WADA has only recently reinstated Rio’s anti-doping labs, after they were shut down in early June for failing to meet international standards.

Amidst the scandals, two University of Alberta chemists are working on ways for anti-doping agencies to test for banned substances without even knowing what they are. With funding from the Partnership for Clean Competition (PCC), the goal is to move their research out from the lab and onto an even playing field.

Professors James Harynuk and Fred West are combining their knowledge of analytical and synthetic chemistry to develop algorithms and a training library to test for both known and emerging performance-enhancing drugs (PEDs), putting anti-doping agencies one step ahead of cheating athletes.

“Sports leagues and federations at both the professional and amateur level have typically been behind when it comes to catching those using PEDs,” says Harynuk, an analytical chemist. “Usually, by the time the substance is banned, the athletes have moved on to newer, even harder to trace substances.”

Harynuk works on gas chromatography—a technique for separating mixtures of molecules—and also builds  using computer-based tools to interpret and understand data arising from these separations in a subject area known as chemoinformatics, the use of informational techniques applied to the field of chemistry. “We try to understand the molecular interactions that govern the separation process. We are ultimately looking to predict how new unknown molecules will behave in an experiment based on what we know about other known molecules, thereby providing a tool to identify the unknown molecules.”

A self-admitted fair-weather sports fan, West said he enjoyed watching the Olympic trials at the University of Alberta earlier this month. For his part, Harynuk will likely be coerced into watching gymnastics in Rio next month, thanks to his five-year-old daughter. (He visited the anti-doping labs in Brazil as a lead up to this research initiative).

“The approaches we are using are way out there to what is currently being done in doping control,” says Harynuk. “There’s a lot of risk, but at the same time, the potential reward is huge. If these tools work the way we are planning, doping agencies will be ahead of the dopers for the first time, predicting and anticipating a drug before it becomes widely used. For the first time, they'll be ahead of the game, ahead of the athletes looking to circumvent the rules of fair play."

Harynuk and West were the only Canadian researchers in the recent funding announcement by the Partnership for Clean Competition (PCC). PCC receives its funding primarily from American professional sports leagues such as the NFL and Major League Baseball. It also receives funding from the PGA Tour and the NHL, the U.S. Olympic Committee, and the U.S. Anti-Doping Agency. The funding, two years with the possibility of an additional year, starts in September and will allow the researchers to hire post-doctoral fellows to strengthen their lab teams.