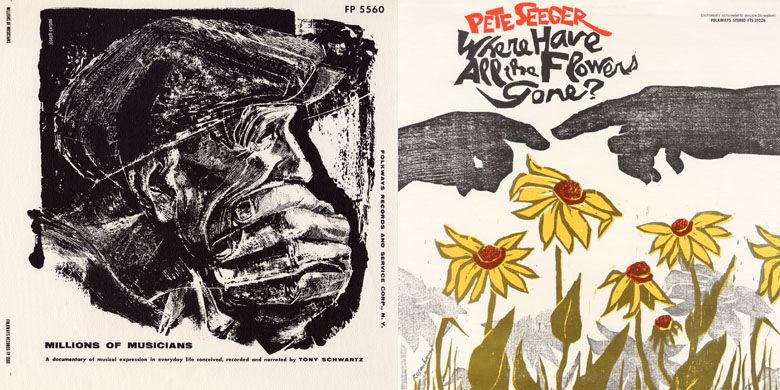 (Edmonton) An exhibition that once captured the imagination of people from all walks of life in Edmonton is now online for the world to experience.

In 2005, the University of Alberta’s folkwaysAlive!, along with the art and design department and Smithsonian Folkways Recordings, staged Seeing the World of Sound: Cover Art of Folkways Records at the FAB Gallery. U of A art and design professor Joan Greer says the exhibition was well received in the community and prompted calls to bring it to other galleries.

A travelling exhibition did not happen, but now that The Look of the Listen: The Cover Art of Folkways Records has been launched online, its potential reach is far greater. The current virtual exhibition highlights more than 200 album covers and sounds from the university’s folkwaysAlive!, collection, which was established after Moses Asch, founder of Folkways Records, donated his entire recordings to the university.

The Look of the Listen

Jonathan Kertzer, folkwaysAlive! director, says the current exhibition extends the reach of the previous show. “We wanted a much wider audience to have access to this, to give people access no matter where they are. The original exhibit was well attended but maybe just a few thousand people saw it. Potentially anybody can see it now.”

Kertzer says the exhibit is a subset of the more than 2,000 recordings released by Asch, including sounds from around the world.

Greer, who, along with Margaret Asch, was one of the curators of the original exhibition, says the show highlights some of the strongest artistic statements on the album covers. Categories include albums illustrating design statements, visual techniques and representations of place. “One of the notions that were really important for Folkways Records was giving voice to all people; we wanted to see how that translated into record cover art.”

But Folkways Records did more than give voice through music to all people. Through a diverse range of albums from The Wonderful World of Insects and Sounds of North American Frogs to readings of Langston Hughes’ poetry, Asch’s record company also created access to sound recordings from around the world. And each album Folkways Records produced over nearly four decades conveyed a message that the listener could understand even before playing the record.

“There was a huge amount of integrity and attention put into making sure that the art and design of the covers worked well and complemented the recording inside. It was very important,” Greer says. “Moe Asch wanted to establish an identity for Folkways and for the visual image to say something about the record within. Collectively the message that the albums conveyed is a really powerful artistic identification that’s diverse.”

Kertzer says album covers are important because they give listeners a more enriching experience, and that the exhibition reconnects people and reminds them of what was special about album covers. “Album covers allow people to learn about the meaning of the music, the lyrics. With a lot of international music, if you don’t understand the background to it, it’s hard to appreciate what you’re hearing. It’s really nice to have the stories behind the music.”

Asch’s grand vision in establishing Folkways Records now means that the U of A is home to an extensive collection of music and sound recordings from Siberia to Africa and beyond. “Moe Asch wanted Folkways to be an encyclopedia of sound, so the collection represents everything, especially in his time,” Kertzer says. “He worked with some really great researchers. He enabled those researchers to have a place to publish their work. When the label really started going it was one of the first to feature a lot of international music, a lot of traditional music of the people.”

Kertzer says the exhibition represents a special relationship between the U of A and an arm of one of the world’s premier institutions. “This was a collaborative exhibit with curators at the Smithsonian Folkways Recordings,” he says. “Through the Smithsonian website, people can download the album covers, look at the album liner notes and listen to 30-second clips. There’s no other academic institution working with Smithsonian Folkways the way that we are.”

Atesh Sonneborn, associate director of Smithsonian Folkways, which holds the intellectual rights to Moses Asch’s estate, says Asch’s donation to the university was unique. “It’s the only time Moe ever gave a set of records to anybody,” Sonneborn says. “It’s an extraordinary scope. It’s the human encyclopedia of all that human ears might hear.”