Engaging the community to treat HIV in Uganda 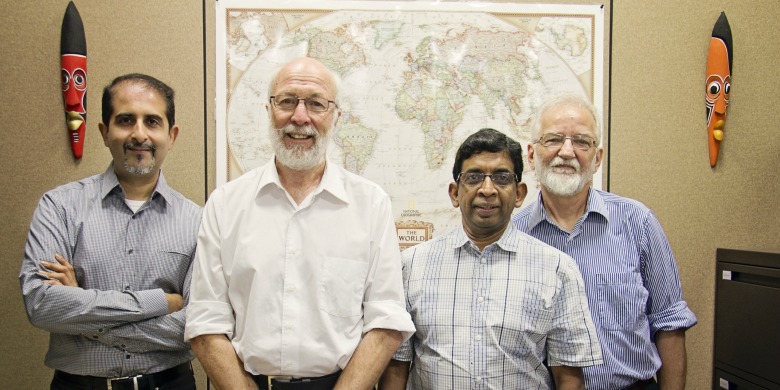 (Edmonton) HIV patients in rural Uganda routinely deal with barriers to care not faced by patients in Western nations. Economic and geographic obstacles severely limit access to life-saving treatment. But new research from the University of Alberta’s School of Public Health has demonstrated a successful way of using community resources to take treatment to the patients.

Working with the Kabarole District Health Department and the School of Public Health at Makerere University in Kampala, Uganda, Walter Kipp, Duncan Saunders, Arif Alibhai and A. (Sentil) Senthilselvan implemented a new care model by which volunteers were trained to provide basic care to HIV patients in the sub-county of Rwimi.

Travelling by bicycle, 40 volunteers each visited an average of five patients weekly to deliver antiretroviral drugs, monitor and support adherence to treatment and assess the patients’ condition. As part of the visit, they recorded their findings and referred any patients with adverse reactions or other clinical problems to the nearby health centre.

In an article published online by the Public Library of Science, the researchers reported the success of the program in terms of effectiveness of implementation and patient health after two years. Patient health was measured using viral load results, the amount of human immunodeficiency virus in plasma samples.

They found that the viral loads of patients within the community-based model were equivalent to or better than those of patients in a well-established hospital-based program.

Enthusiastic volunteers played a crucial role in ensuring the success of the innovative program and the improved health of the patients. Similar programs had been implemented through earlier research, but used costlier resources and personnel such as highly educated, paid field officers. Tapping into the African culture of valuing communal well-being over the individual enabled the researchers to recruit volunteers to provide similar services at a much lower cost, leading to a sustainable way of providing care.

Tom Rubaale, project co-ordinator at the Kabarole District Health Department, says the program had a positive impact on the quality of life for the patients and their families. “Some of the patients started treatment when they were bedridden. After they received the treatment, they were able to walk and start working again,” he said. “Family members were also relieved of the burden of care and were able to resume their work.”

According to Joseph Konde-Lule, professor of epidemiology at Makerere University, the study provides much-needed evidence to support new strategies within the Ministry of Health. “Shifting some of the responsibilities of health care from highly trained to less-trained individuals is supported by the World Health Organization and is now one of the driving policies for the Uganda Ministry of Health,” he said.

“But such a shift needs to be based on scientific evidence. This study provides the required scientific proof regarding the effectiveness of volunteers and should facilitate implementing this policy in Uganda.”

Kipp also hopes that the program will be implemented in other areas of Uganda to address treatment barriers for HIV patients. “You can clearly see that hospital-based treatments are not the only answer in this region, because many rural residents just can’t access them,” he said.

“HIV is so devastating in Uganda, and this program provided care to many people who would not have survived without it.”

The research was funded by the Canadian Institutes of Health Research.

Engaging the community to treat HIV in Uganda
Newsroom