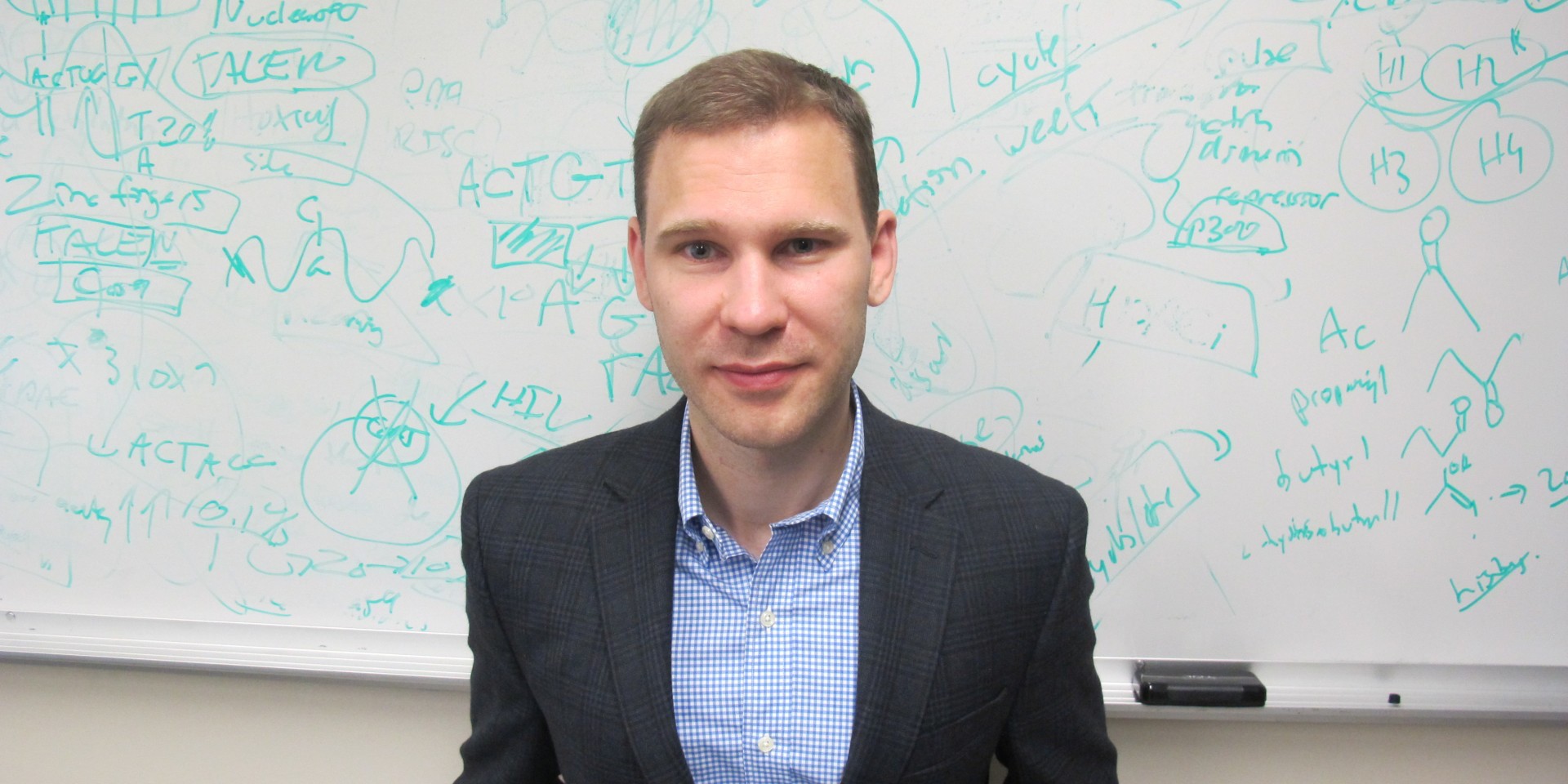 In his mind, Basil Hubbard can already picture a new world of therapeutic treatments for millions of patients just over the horizon. It’s a future in which diseases like muscular dystrophy, cystic fibrosis and many others are treated permanently through the science of genome engineering. Thanks to his latest work, Hubbard is bringing that future closer to reality.

Hubbard’s research, published in the journal Nature Methods, demonstrates a new technology advancing the field of genome engineering. The method significantly improves the ability of scientists to target specific faulty genes and then “edit” them, replacing the damaged genetic code with healthy DNA.

“There is a trend in the scientific community to develop therapeutics in a more rational fashion, rather than just relying on traditional chemical screens,” says Hubbard, an assistant professor of pharmacology in the University of Alberta’s Faculty of Medicine & Dentistry. “We’re moving towards a very logical type of treatment for genetic diseases, where we can actually say, ‘Your disease is caused by a mutation in gene X, and we’re going to correct this mutation to treat it.’

“In theory, genome engineering will eventually allow us to permanently cure genetic diseases by editing the specific faulty genes.”

Genome engineering involves the targeted, specific modification of an organism’s genetic information. Much like how a computer programmer edits computer code, scientists could one day replace a person’s broken or unhealthy genes with healthy ones through the use of sequence-specific DNA binding proteins attached to DNA-editing tools. The field has made large strides over the last two decades and may one day revolutionize medical care.

One of the obstacles still to be addressed in the field before it can see widespread use in humans is how to ensure the proteins only affect the specific target genes in need of repair. With current technologies, the proteins bind to and edit the correct genes the vast majority of the time, but more improvements are needed to ensure off-target genes aren’t modified—a result that could potentially cause serious health problems itself.

Improving the specificity of DNA-binding proteins

Through his research, undertaken as a post-doctoral fellow in the lab of David R. Liu at Harvard University, Hubbard has developed a way to reduce the off-target DNA binding of a class of gene editing proteins known as transcription activator-like effector nucleases (TALENs). The new method allows researchers to rapidly evolve the proteins autonomously to make them more specific and targeted over time.

“This technology allows you to systematically say, ‘I want to target this DNA sequence, and I don’t want to target these others,’ and it basically evolves a protein to do just that,” says Hubbard. “Using this system, we can produce gene editing tools that are 100 times more specific for their target sequence.”

Much of the current research in genome engineering is focused on treating monogenic diseases—diseases that involve a single gene—because they’re much easier for researchers to target successfully. Examples include diseases such as hemophilia, sickle-cell anemia, muscular dystrophy and cystic fibrosis.

Though the field is still in its relative infancy, Hubbard says human clinical trials involving sequence-specific DNA-editing agents are already underway. If successful, he expects the first clinical applications could be seen in the next decade. He hopes his current work will play a role in helping genome engineering reach its full potential and plans to continue his research in the quickly expanding field.

“Whereas traditional pharmaceutical drugs have a transient effect, gene editing could possibly provide a permanent cure for a lot of different diseases,” says Hubbard. “We still have to overcome many hurdles, but I think this technology definitely has the potential to be transformative in medicine.”