C.D. Howe Scholarship winner is also on track to be an Academic All-Canadian. 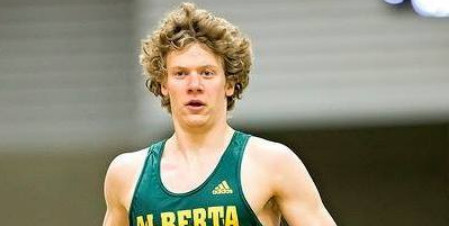 Brendan Calef is running away with honours in academics and athletics: he is one of two winners of this year’s C.D. Howe awards.

It should come as no surprise that Brendan Calef is able to stay ahead of things in his engineering studies: when he isn’t hitting the books, he’s outrunning competitors as a key member of the University of Alberta Golden Bears track team.

With a perfect grade point average of 4.0 and nine A+ grades at the end of his first year of studies, Calef was named the CanWest and Golden Bears Track Rookie of the Year and is on track to be one of the U of A's Academic All-Canadian student-athletes this year.

Now, to top it all off, he has won the C.D. Howe scholarship—one of only two awarded in Canada each year.

“My first reaction was, ‘No way!’ It’s a Canada-wide competition. To get the award is a huge honour; I’m happy about it,” said Calef.

The C.D. Howe National Engineering Scholarship is awarded annually to two students nationwide, one male and one female, entering their second year of engineering. This year, both recipients are U of A students—the other is engineering physics student Natasha Pye.

The scholarship, amounting to $7,500 per year for three years, recognizes academic excellence and leadership skills in students. The candidates are nominated by the engineering deans and selected by a committee of Canadian university and college representatives.

Calef is spending his summer working on a research project with mechanical engineering professor Martin Barczyk, programming and coding for a computer vision project on drone vehicles used in photography. His main research interests revolve around mechatronics and robotics.

“Right now, I’m basically trying to modify an Android app to allow the professor to do the computer vision project he’s working on,” said Calef, who has been accepted into the electrical engineering program.

He’s also taking part in student team projects as a member of the Autonomous Robotic Vehicle Project, an interdisciplinary engineering team that competes annually at an international robotic submarine competition in the U.S. He worked on the programming side of things with ARVP, and is hoping to work with other student clubs and initiatives in the years to come.

His athletic career started in junior high school, where he competed in middle-distance and cross-country running, and butterfly and freestyle swimming.

Considering Calef’s outstanding performance on the school track and field team in Bev Facey High School, his coach encouraged him to try out for the Alberta Summer Games. This, he says, was a turning point: he joined the Summer Games team, made it to the Alberta Provincial Track and Field Championship, and qualified for the Western Track and Field Championship. Soon after, he won three high-school championships in 800-metre track race, and finished fifth at the Youth Nationals in both 800- and 1500- metre distances.

“After going to all those consecutive meets, I got hooked on the experience and had a lot of success, so I wanted to pursue it as my main sport,” said Calef.

“I’d like to be able to make a national team and compete for Canada at the University Games or the U23 games,” he said, adding that he’d love a shot at representing Canada in the Olympics one day.

“After I graduate, I’d like to try to go for the Olympics. But, at the end of the day, engineering is my main future. I want to continue running, but there’s going to be a point in time where I’m going to end up stopping training at such a high level.”

“The biggest thing, I guess, is to stay on top of things as they come to you rather than trying to get things done just in time for the deadline,” said Calef.