At one point, I could see flames in my rearview mirror. Water bombers and helicopters soared right over our cars, nearly constantly. 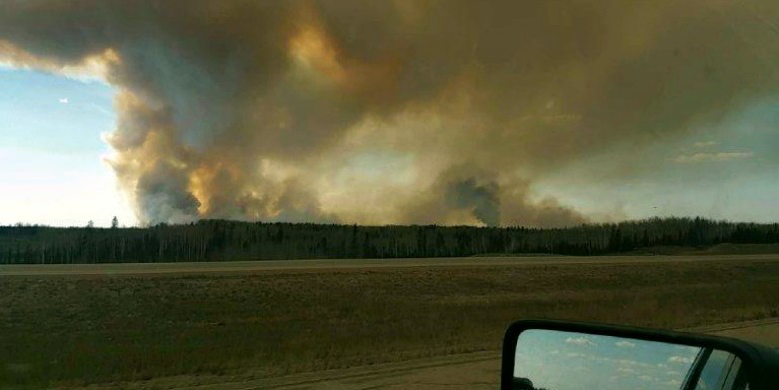 Nearly 100 engineering co-op program students from the University of Alberta who were working in Fort McMurray have been reported safe.

The entire city of Fort McMurray was evacuated May 3 when a forest fire converged on the city. The engineering students were working at or just beginning co-op placements in the area.

“The safety of our students is always our first concern,” said Fraser Forbes, dean of engineering. “Safety is always a major consideration in co-op placements.”

The faculty’s co-op co-ordinators “have been working tirelessly to contact all of our students in the area, and I’m relieved to know that all of the students we’ve connected with are safe,” Forbes said.

“We are taking similar efforts to reach out to our graduate students who are in the area, to ensure they are safe and secure.”

“We pair our students with reputable and responsible employers,” Forbes noted. “We know our students are in good hands. Our hearts go out to all of those affected by this tragedy.”

On Wednesday morning, many of the students the faculty had contacted had been flown to Edmonton or Calgary, found refuge at evacuee stations or had managed to drive home. Some continued to work.

Two of the co-op students, Derek Friend and Andrew Buchner, say the situation in Fort McMurray was surreal.

“This was my third day in Fort McMurray—not the greatest of starts,” Buchner said in an email interview from the Syncrude Mildred Lake site, where he found refuge.

The third-year mining engineering student was scheduled to start his co-op placement Wednesday. He drove to Fort McMurray Monday.

“The fire was seen as just a nuisance at this point, and word was that crews were beginning to get it under control by that evening,” he said.

By noon Tuesday, “all that changed.” The Thickwood area of the city was under evacuation order. Buchner, who is unfamiliar with the city, jumped in his car at 3:30 p.m. to get gas.

“This was a mistake,” he said. “I found myself caught in traffic that ended up with us gridlocked on Thickwood Boulevard. Traffic wasn't moving, and the smaller fire on the southwestern end of town was growing, moving north. At one point, I could see flames in my rearview mirror; this was around 4:45 p.m. Water bombers and helicopters soared right over our cars, nearly constantly.”

“I U-turned into downtown—where visibility was only a few hundred feet in thick, yellow smoke—and began driving north to reach one of the work camps that had been open,” he said. “Syncrude had tweeted that any employees and their families were welcome to stay at Mildred Lake, so I eventually reached the site at some time after 8:30 p.m., through bumper-to-bumper traffic.”

At Mildred Lake, he ran into another engineering co-op student and they managed to get rooms for the night. As of Wednesday afternoon, Buchner was still at the site and was expecting to drive back to Edmonton.

The events unfolded differently for Friend, a fourth-year mining engineering student who began his co-op placement with Shell at the Albian Sands site in February.

Friend also drove to Fort McMurray Monday, when the threat of fire was low. Working a night shift, he and his colleagues heard there were some evacuations underway in the city—workers began preparing to leave the job site so they could go to their homes in case they had to evacuate. “That’s when we got the call that there was no more traffic going south,” he said.

The plan was to stay at the work site in housing built for workers. It didn’t take long for evacuees to begin showing up at the site—Shell had announced it was making room for evacuees there.

“Families started rolling in and pretty soon, Shell is turning into a refugee centre,” Friend said.

With families needing space, Friend checked out of his room. “I figured someone else needed the room more than I did. I can sleep on a cot.”

To make room for evacuees, Shell told all non-essential personnel to prepare to be flown out to Edmonton or Calgary.

Friend boarded a flight to Edmonton and returned to his family’s farm near Camrose, Alberta, at about 10:30 p.m. Tuesday.

He says he is impressed with the way the crisis was handled.

“It was pretty hectic when we were heading to Shell’s airport. There was a lineup of vehicles with residents seeking shelter in the camp, but at the camp there were a lot of people helping. One guy was going around making major announcements, the security people were organizing vehicle, people and their belongings.

“It was busy but Shell and the rest of the oilsands industry deserve a lot of respect—and so do the volunteers and first responders like the firefighters and police who are working 24 hours a day. We need to praise them for doing their jobs.”

Aboard the plane, Friend met up with three other engineering co-op students flying back to Edmonton.

On Wednesday, at the family farm, Friend was dividing his time between newscasts and work. Even with the evacuation, he’s chosen to keep working on one of his job assignments.

“I told my supervisor I’d work on it from home,” he said. “And anyway, it’s too hot to do farm work.”