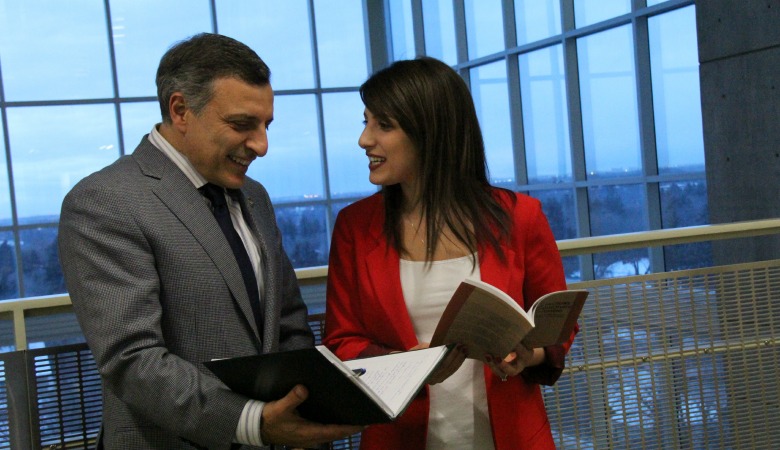 131118-convo-halaabourizk-banner
Hala AbouRizk-Newstead compares notes with her dad and master's co-supervisor, Simaan AbouRizk. Hala's research on risk analysis in the construction industry drew on a thesis Simaan had written when she was a child.

(Edmonton) It’s one thing to know your parents are interested in research you’re doing for your master’s degree—some students complain that their parents just don’t get it. But when your father is co-supervising you, things can get a little tricky.

That was the case for Hala AbouRizk-Newstead, who graduates this week with a master’s degree from the Department of Civil and Environmental Engineering. Her father, Simaan AbouRizk, is one of the University of Alberta’s most highly regarded professors. He is recognized internationally for his research in construction engineering and has supervised nearly 100 master’s and PhD students over the course of a remarkable career.

At first blush, it seems difficult to connect the dots between Hala’s undergraduate degree—a double major in psychology and sociology in the Faculty of Arts—and her master’s degree. But there are important and direct connections.

Hala began conducting research in the Faculty of Engineering during the summer of 2009, while she was still an undergraduate student. At that time, she was working with civil engineering professors SangHyun Lee and Aminah Robinson Fayek, who were researching absenteeism in the construction industry with a colleague from the Alberta School of Business.

“Absenteeism hinders productivity and morale, and it’s really easy for some people in the construction industry not to show up,” she explains. “There was a culture of absenteeism that developed and I was looking at what caused it, what caused workers to get into those habits and how to get them out of it.”

For Hala, the project was an introduction to the world her father had achieved so much in. Simaan is a Canada Research Chair and holds the NSERC/Alberta Construction Industry Senior Industrial Research Chair in Construction Engineering and Management.

“Growing up, I knew what my dad did; I loved what my dad had always done,” she said. “He was a professor at the university—he was exactly what I hoped I would become. But that summer really changed my path.”

After completing her undergraduate degree, Hala took on a job as a facilitator and analyst at SMA Consulting, which provides consulting services to the construction industry. Meanwhile, back at the Faculty of Engineering, Lee was working on ways to get Hala to come back to school to work on her master’s degree.

Simaan recalls with a laugh that Lee “tried talking me into talking her into coming here,” then admits that he always dreamed of working with his daughter.

In the end, she did make the decision, and began working on her master’s degree part-time, exploring new methods of analyzing risk in the construction industry. Her lead supervisor was Aminah Robinson-Fayek, a colleague of her father’s, who holds the NSERC Industrial Research Chair in Strategic Construction Modelling and Delivery. Hala’s work zeroed in on the intangible ways that probability and severity of risks are estimated in the construction industry.

It’s important to be able to quantify the intuition that construction engineers and worker develop with experience. A formula to determine severity of risks was established years ago by assigning a numeric value to the probability of an event occurring and multiplying it by a dollar value or hours of work lost if the event occurred.

In her research, Hala discovered that there was a huge discrepancy among industry leaders when they used the words “likely” or “unlikely” to describe the probability of an adverse event. When asked to apply a percentage to the word “likely,” they offered replies ranging from 60 to 90 per cent.

“There’s a lot of literature in psychology about what different terms like ‘somewhat likely’ or ‘likely’ mean in surveys, so we looked into that, and I also did my own surveys about what those terms mean to people in the industry,” says Hala.

Building on her father’s work

Applying research from the thesis Simaan had written when she was a child, she created a set of standardized tables that can be used to make more accurate estimates of risk and severity.

“Along the way, she showed us what we were doing wrong,” adds Simaan.

Both Hala and Simaan admit there were times when the pressure of her research built up.

“My mom kept us both sane through this, I’m sure,” says Hala.

Simaan says the experience of co-supervising his daughter has given him a fresh outlook on teaching because of his personal stake in Hala’s success, whereas with the rest of the students he supervises, it’s professional. It’s a fine distinction, but Simaan contends that it’s refreshing to experience graduate studies on a personal level again.

“It rejuvenates you to rediscover what is good and important. It’s good to see someone succeed, but it’s different when it’s your daughter. It’s rewarding to see she has become an authority and that she has built herself a good career.”