Engineering grad finds adventure on the path of possibilities

From launching a rocket in Norway to climbing a mountain in Colorado, Chelsea Morin earned her engineering degree by going where opportunity led her. 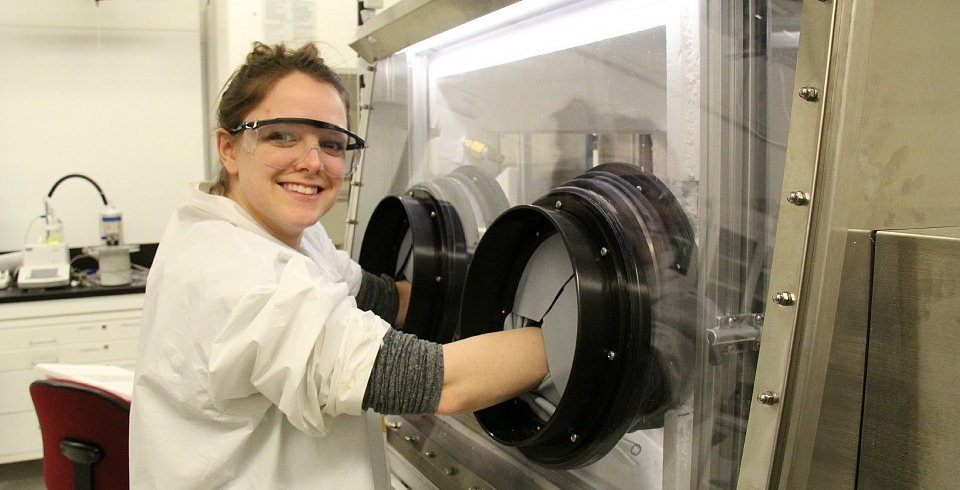 Chelsea Morin shows how she conducted some of her research into the effectiveness of powdered-drug inhalers at different temperatures.

(Edmonton) If it weren’t for an off-the-cuff comment her sister made about a prosthetic leg, Chelsea Morin would never have launched a rocket in Norway, or hiked to the top of a mountain in Colorado—all in the name of engineering.

While Chelsea was still in high school, her neighbour lost a leg and began wearing a prosthetic limb. Her sister Janelle, then studying at the University of Alberta (and a former Students’ Union president), made a seemingly innocuous observation that sealed Chelsea’s fate.

She didn’t know it at the time, but her decision to study engineering would lead her down a path filled with a huge variety of possibilities.

When she was accepted into the U of A’s Canada-Norway Student Sounding Rocket (CaNoRock) Exchange Program, a week-long intensive session on space technology hosted by the University of Oslo at the Andoya Rocket Range in Norway, Morin began to see herself in a career that is exciting and rewarding, and helps others.

“To be honest, CaNoRock helped shape my interests in biomedical engineering. One of the things that attracted me is some of the projects the Canadian Space Agency was working on at the time, and it brings all of my interests together—it’s the coolest thing to work on,” she said.

This involved testing “puffers” (technically known as pressurized metered dose inhalers) inside a sealed refrigerated box, then travelling to the Mt. Evans Outdoor Lab School in Evergreen, Colo. There, she and fellow student Jordan Titosky tested the inhalers’ effectiveness at different altitudes, topping out at 4,300 metres above sea level, at the summit of the mountain.

“We wanted to test the devices under the same conditions people use them,” she said, adding that their initial findings show decreased drug delivery in cold temperatures.

“This is important, especially for people who live in a cold climate like Edmonton.”

Because Morin ran out of time to complete a journal publication on the research during the co-op work term, she finished the project as part of a Dean’s Research Award project. The program gives undergraduate students experience conducting leading-edge research under the supervision of professors, graduate students and post-doctoral fellows.

The paper is now under review by the journal Pharmaceutical Research.

Morin’s first Dean’s Research Award project was also related to biomedical challenges, trying to find a camera that could be used to track the eye movements of drivers being tested in a driving simulator.

“The Dean’s Research Awards really enhanced my education—they gave me experience beyond the theoretical understanding of all the different concepts,” she said.

Somehow, Morin managed to fit a social life in among all those experiences. While completing her degree, she served as captain of the U of A ringette team (later known as the Northern Alberta Universities Ringette Club), which won national championships in 2012, 2013 and 2014. The team is being inducted into the Edmonton Sports Hall of Fame this month.

Now that she’s graduating, Morin is excited about the different places her engineering degree can take her. First on the agenda is medical school. From there—who knows?

“Now that I’ve had the chance to work in jobs I thoroughly enjoyed, I’m not settling for anything less,” said Morin. “This degree has given me the opportunity to find jobs that I really enjoy.”

Engineering grad finds adventure on the path of possibilities
Newsroom