Aliya Lakhani had no intention of becoming an engineer—until she realized the impact she could have on the profession and on society. 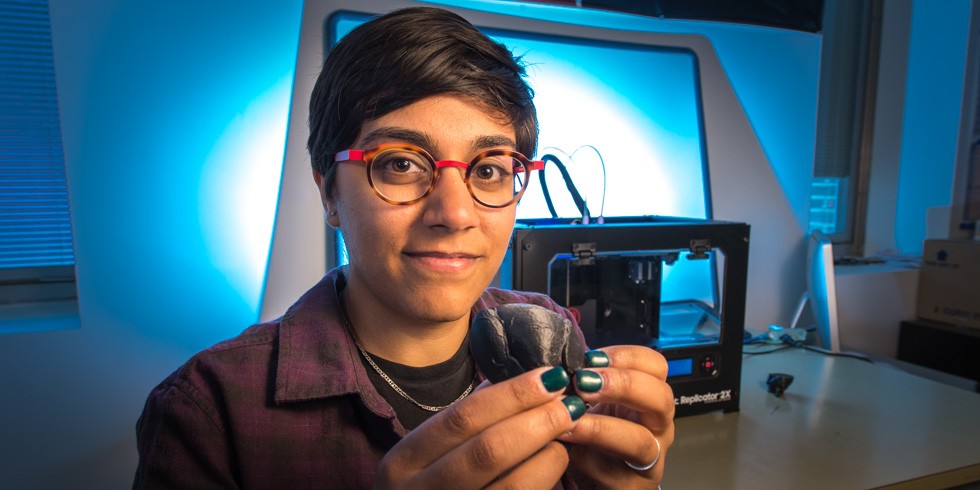 Aliyah Lakhani, shown here with 3D printed replica of a childs heart, won the (first) Canadian Memorial Engineering Fund Scholarship. She is now graduating with a degree in materials engineering.

For someone who explored virtually everything the University of Alberta’s engineering program has to offer—from undergraduate research and co-op job placements to international development work—Aliya Lakhani is pretty casual about admitting she had no intention of becoming an engineer.

“Engineering was my backup plan,” says Lakhani, who graduates this week with a degree in chemical engineering (biomedical) and a job as an engineer-in-training with Shell Canada. “I always thought I’d study medicine because I wanted to help people and interact with people on a day-to-day basis.  I saw engineering as an undergraduate degree on my way to medicine, as a Plan B.”

So why the change of heart?

“I realized that engineers have a huge impact on society. In just one engineering project you can affect so many people’s lives and have an impact on a really large scale,” she says.

“Engineering had such obvious implications in the real world, and I thought my learning was much more meaningful. I knew that was the path. I wanted to become an engineer. It became Plan A—on my own terms.”

For a time, Lakhani considered a career as an academic—and immersed herself in research projects.

She took on a research project in biomaterials through the Dean’s Research Awards program, became involved in research on diabetic pancreatic islet cells after attending the university’s Undergraduate Research Initiative Research Crawl and took on a co-op term conducting truly interdisciplinary research in the Canadian Centre for Welding and Joining. There, she worked on developing 3-D image reconstruction techniques to help researchers visualize the structure of welds. She applied this technique to create 3-D printed heart models from patient MRI and CT scans to provide pediatric cardiologists with better tools for visualizing the internal structure of the organ.

Lakhani also explored the social impact of engineers as a leader in the U of A student chapter of Engineers Without Borders. In 2014, she spent four months in Ghana on an EWB junior fellowship, helping to create a program aimed at improving knowledge transfer between agricultural colleges and rural farmers.

While there, she noticed another gap—between men and women in schools and on farms. Calling the situation the biggest injustice she’d seen, Lakhani began exploring gender equity, hoping to return to Africa to work on equality projects. She won a prestigious Ambassador Award from the Canadian Engineering Memorial Foundation, a group established after 14 women—12 of them engineering students—were murdered at L’École Polytechnique de Montréal in 1989.

The award funded a return trip to Africa. This time, Lakhani joined the Students’ International Health Association through the U of A’s School of Public Health to work on a water sanitation project in Tanzania. Although this project wasn’t directly focused on diversity in engineering, Lakhani still has strong feelings on the matter. She realized she can have a greater impact on gender equity by working on it at home.

“The L’École Polytechnique massacre opened our eyes to the fact that there is oppression of women in Canada,” she says. “Most people perceive engineering to be a profession that’s really competitive and people believe that ‘engineers only care about the money.’ Changing that belief to ‘engineers serve society’ is more motivating to more people. The logic is more conducive to women and minorities going into engineering.”

To that end, Lakhani has visited area high schools, delivering a message about the impact engineers have on the world, and of the importance of diversity in the profession.

“I want people to see engineering not as a field dominated by white males but simply as a field that makes a real difference in society. Engineering helps people—it is socially driven.”

She’s more supportive of measures that make a difference than those that make a statement. For example, the Faculty of Engineering’s DiscoverE outreach program offers award-winning programs such as the Girls, Engineering, Mentorship (GEM) Club, and the Girls’ Coding Club.

“We need to use our understanding of barriers to make outreach more effective,” she says. “A program like GEM Club has a stronger impact than an event like Walk a Mile in Her Shoes.”

Lakhani will remain active in diversity in some way. For now, she’s looking forward to starting her engineering career—which she suspects is something very much like starting university all over again.

Lakhani had a difficult choice to make between two engineering job offers—she chose to join Shell. The company, she notes, has an engineer-in-training program that’s world-renowned, exposing new engineers to a variety of experiences on their way to earning a professional engineering designation.

“This is definitely a new stage in my development because I’m facing this world that I don’t know and I recognize how much I have to learn, and how things are going to be different,” she says. “I learned how to succeed in university and it became easy and comfortable. So starting work is throwing a wrench into that and I’m going back into a world that’s unfamiliar.”