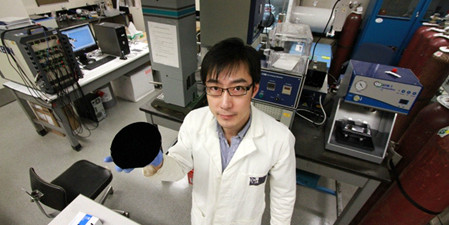 (Edmonton) A research team from the University of Alberta has used carbon nanomaterials to develop next-generation batteries capable of charging faster and lasting longer than today’s standard lithium-ion batteries.

“What we’ve done is develop a new electrochemistry technology that can provide high energy density and high power density for the next generation,” said lead researcher Xinwei Cui, who completed his PhD in materials engineering at the U of A in 2010 and is now chief technology officer at AdvEn Solutions, a technology development company that is working on the battery so it can be commercially manufactured for use in electronic devices.

“We tried lots of different materials. Normally carbon is used as the anode in lithium-ion batteries, but we used carbon as the cathode, and this is used to build a battery with induced fluorination,” Cui explained.

The advantages of using carbon are that it is cost-effective and safe to use, and the energy output is five to eight times higher than lithium-ion batteries currently on the market. The new battery also performs better than two other future technologies: lithium-sulfur batteries, currently in the prototype stage, and lithium-air batteries, now under development. For example, the induced-fluorination technology could be used to produce cellphone batteries that would charge faster and last longer.

“Nobody knew that carbon could be used as a cathode with such a high performance. That is what’s unique with our technology and what is detailed in our paper,” Cui said.

The team published their findings in the journal Nature Scientific Reports. The paper was written by Cui; Jian Chen, a researcher in the National Institute for Nanotechnology; Tianfei Wang, a PhD candidate in materials engineering; and Weixing Chen, professor of chemical and materials engineering at the U of A.

“It wasn’t a quick process. Once we found carbon is different, we persisted for three years until we got results,” Cui said.

AdvEn Solutions hopes to have a prototype by the end of 2014 and aims to develop three versions of the battery to serve different goals. One battery would have a high power output and a long life cycle, the second would have high energy for quick charging, and the third a super-high energy storage.

“We have a long way to go, but we’re on the right track. It’s exciting work and we want everyone to know about it and that it’s very young but promising,” said Cui.

AdvEn is a growing company housed within the Department of Chemical and Materials Engineering at the U of A. It aims to expand by taking on new researchers and gaining more funding. The company recently secured a partnership with the U.S.-based aerospace company Lockheed Martin to develop an advanced anode for AdvEn’s high-performance carbon cathode.